Fresh Salads Fast – Lettuce Express is now open at 14505 West Maple Road in the Grayhawk shopping center. A creation of Omaha’s Cutchall Management Company, Lettuce Express sells signature salads for $7.95 and drinks for $1. The restaurant’s tagline is “more flavor for less.” Drive through and dine-in options are available.

Speaking of Healthy Food – Omaha’s first Crisp & Green restaurant is now under construction inside a 3,100 sq. ft. end cap bay in a new retail strip at 80th & Dodge Street. Two-to-four additional locations are planned in the metro area over the next year. The Minneapolis-based, healthy-eating chain has locations in nine states.

All Hail the King – Little King, the sub-sandwich chain that rose to popularity in the 1970s, suddenly has a much brighter future. Chip James, CEO of Lockwood Development, has purchased the Omaha-based company with plans to expand and modernize the brand. Little King currently has five stores in Omaha, plus two in Lincoln and one in Grand Island. James plans to open three corporate-owned stores at 86th & West Dodge Road, 144th & West Dodge Road and near 204th & F Street.

Hair Care All in One Spot – Hairarchy Salon & Studios and Beauty First will open this summer in a co-branded, end-cap bay at 7815 Dodge Street. Beauty First will be relocating from Beverly Hills Plaza across the street. Hairarchy will provide upscale custom-designed hairstyling salons for professionals who run their own private businesses. The space was previously occupied by Beauty Brands.

Nostalgia Lost – After 47 years of serving homemade comfort food, Jack & Mary’s Restaurant has closed. The restaurant experienced a 70 percent decrease in business, resulting in a $330,000 loss in 2020. Business did not come back in big enough numbers in 2021. Before the pandemic, Jack & Mary’s averaged more than 2,200 dine-in guests and 600 catered meals per week. In a public statement, the restaurant’s owner held open the possibility of reopening in the future. 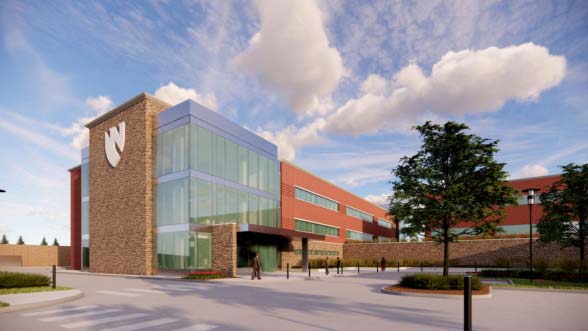 Nebraska Medicine will soon have a fourth medical building on its Village Pointe campus.

Noddle Development will be the developer and owner of the 115,000 sq. ft., 3-story building. Construction mobilization has started, and the building should be completed in approximately 22 months. Nebraska Medicine will be the building’s sole occupant.

The two existing medical office buildings on the Village Pointe campus will be modified as part of the project. The single-story building on the far west side of the campus will remain as is.

The site has already been entitled for an additional 120,000 sq. ft. if Nebraska Medicine were to need it. Should that future construction project occur, Noddle Companies would construct a modest parking structure to accommodate the additional employees and patients.

Plans call for 175th Street, which runs between the two initial buildings, to be closed. A new roadway with a signalized intersection would be constructed on the west end of the site. The property would also connect to the existing traffic circle and the neighborhoods to the south.

The planned metro area locations are Capehart Road in Bellevue, the southwest corner of 108th & Maple Street, the site of a former Village Inn at 6607 North 72nd Street, in front of Menard’s at 72nd & L Street, and 2201 West Broadway in Council Bluffs.

The Omaha locations will be the company’s first in Nebraska. The existing Iowa locations are in Coralville and Iowa City on the eastern side of the state.

Construction appears to be restarting on the stalled Moxy by Marriott Hotel project planned for a very small lot on the southwest corner of 12th & Harney Street. The site had been the long-time home of the Old Market Diner. The Moxy would be a 6-story boutique hotel that appeals to young professional and urban-oriented customers.

Employees have stated moving into the 6-story Carson Group building on the southwest corner of 144th & West Dodge Road. In addition to Carson Group, JE Dunn Construction Company will also be an occupant.

Two retail buildings of 10,000 sq. ft. and 5,000 sq. ft. are planned for a 1.84-acre lot on the southwest corner of 156th & State Street in northwest Omaha. The site is located in a fast-growing area currently experiencing extensive single-family housing growth. It is also located just north of the new Omaha Public Schools high school.

The University of Nebraska system once again ranked among the top 100 academic institutions worldwide in earning U.S. patents to protect the research and discoveries of its faculty.

McGrath North is offering a seminar titled “Recent Changes to Nebraska Condominium Law Which Will Opoen the Door to Condoiminium Development” August 11th from 11:30 a.m. to 1:00 p.m. at the First National Tower 7th Floor Conference Center. If interested, RSVP to rlauver@mcgrathnorth.com by August 4th.

Civil engineering firm Kirkham Michael is celebrating 75 years in business this year. The company’s headquarters is at 127th & West Dodge Road. The firm has branch offices in Nebraska, Kansas and Iowa.

WoodmenLife’s 2020 financial performance included a total income of more than $1 billion and certificate reserves of nearly $8.3 billion, according to the company’s annual report released last month. At year end, WoodmenLife had total assets of more than $11.2 billion, and life insurance in force increased to $38.8 billion. Benefit payments to members and beneficiaries totaled $853.5 million, while refunds to members were $28.8 million.

For the eighth straight month, the Creighton University Rural Mainstreet Index remained above growth neutral, according to the monthly survey of bank CEOs in rural areas of a 10-state region dependent on agriculture and/or energy.

The overall index for July fell to a healthy 65.6 from June’s strong 70.0. The index ranges between 0 and 100 with a reading of 50.0 representing growth neutral. Approximately, 31.3% of bank CEOs reported that their local economy expanded between June and July.

Allan Lozier, philanthropist and former CEO of Lozier Corp. has died at age 87. His foundation has donated more than $430 million since its founding 35 years ago. Omaha-based Lozier Corp. manufactures retail fixtures for use in stores nationwide.

Greater Omaha Chamber president David Brown has announced he will retire in 2022. During his 18-year tenure, the chamber expanded the Greater Omaha Economic Development Partnership from a three-county to a seven-county collaborative representing 44 percent of Nebraska’s population and 60 percent of the state’s GDP.

Reece Andrews, senior product manager for FieldNET™ and Zimmatic™ Controls at Omaha-based Lindsay Corporation, was named Innovator of the Year by the Irrigation Association.