Make Way for Sub Sandwiches – Workers have started demolishing a former gas station/rental car office at 86th & West Dodge Road. Once the building is gone, construction will begin on a free-standing Little King restaurant. Founded in Omaha in 1969, Little King currently has five metro area locations plus stores in Lincoln and Grand Island.

The Wall to Wall Wine and Spirits store in Montclair Shopping Center (near 132nd & West Center Road) is getting very close to opening. Build-out is complete, store fixtures are in place and merchandise is starting to go in. The new Hy-Vee-owned concept already has a store open at Shadow Lake Towne Center in Papillion.

But That’s Not the Only New Liquor Superstore – Williquors, a wine, spirits and beer superstore plans to open in the fall of 2022 at Village Pointe Shopping Center. Williquors has stores in Bismarck, N.D. and Sioux Falls, S.D. The existing stores range from 26,000 to 28,000 sq. ft. Village Pointe has been on a roll lately, having attracted Warby Parker, Madewell, Sunglass Hut and Restore Hyper Wellness.

Fleet Feet plans to open a 2,000 sq. ft. store in April at 6750 Mercy Road in Aksarben Village. The family-owned store is part of a network of specialty running, walking and fitness stores across the country. Fleet Feet has an existing store near 176th & West Center Road.

Salute to a 100-Year-Old Friend – Johnny’s Café, the legendary steakhouse at 27th & Q has been a big part of South Omaha history. The next-door stockyards are long gone, but Johnny’s still feels like the place cattlemen would go for a celebratory dinner after signing a big livestock deal. If you want to learn more about this iconic restaurant, check out Sarah Baker Hansen’s Flatwater Free Press article HERE. 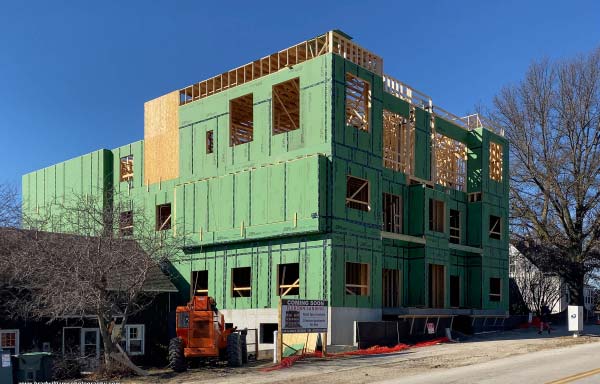 The February 2022 Grow Omaha Construction Update video, produced by Brad Williams, is now available on our website or by clicking HERE.

Grow Omaha’s construction videos are full of video footage and information about local developments. This month’s episode features 20 projects ranging from Council Bluffs to west Omaha. This week’s Big Story highlights just some of the projects you’ll see in the video…

New Roadway – After a long closure, 120th Street is now open between West Maple Road and Fort Street. The roadway has been widened to four lanes.

Multi-Family Development – At 120th & Roanoke Boulevard, construction has started on an apartment complex with five buildings, 237 units and a swimming pool.

Google Data Center – Well, it’s hasn’t been officially announced as Google, but that’s what everyone thinks it is. Grading has started on a 261-acre data center site near 112th & State Street. When done, the site will have at least five buildings. You can easily notice the site while driving on Highway 133.

The Westline at Flanagan Lake – At 168th & Fort, the Westline apartments will have seven buildings with 550 to 600 apartment units overlooking the lake.

Elkhorn Station & Elkhorn Landing – Two mixed-use buildings are coming to Elkhorn’s downtown district. The almost-completed Elkhorn Station is a 4-story building with street-level retail and 90 apartment units at 2606 Main Street. Elkhorn Landing is just to the west of Main street on Elkhorn Drive. That project consists of two, 3-story buildings with 14 living units – both condos and apartments – and basement parking. (Elkhorn Landing is pictured in Brad Williams’s photo above).

Ovation at Heartwood Preserve – This is a large development project on the northern portion of Heartwood Preserve (between Pacific Street and West Dodge Road). Ovation consists of two, 4-story buildings, each with 150 units. One of the buildings will have assisted living while the other will be independent living.

Freeway Interchange – As part of the massive overhaul of the entire Council Bluffs interstate system, The Iowa Department of Transportation is completely rebuilding the Interstate 29/480 interchange (just east of downtown Omaha). Many of the old bridges and ramps have already been removed. The new bridges currently under construction will be able to handle much more traffic.

Gambling officials hope to break ground on a new casino at Horseman’s Park (63rd & Q Street) by late spring, according to WOWT. Ten months after construction begins, a transitional facility will open with gaming machines like slots to be used until the entire facility is complete. That’s expected to take two years from the start of construction.

Omaha Performing Arts recently gave an update on construction at Steelhouse Omaha, the $100 million live music venue under construction between the Holland Center and the Capitol District. Because of winter weather, much of the construction work has been taking place under tarps. Crews have been building interior stairs and catwalks, plus installing plumbing, electrical and mechanical systems. Opening is still scheduled for mid-2023.

Nebraska is the #9 best state for franchise growth in 2022, according to Franchising Economic Outlook, a report published by the International Franchise Association. Nebraska has 5,850 franchise businesses, employing 58,055 people, generating $5.46 billion per year.

Real Estate News from CoStar – TJX Cos., the giant off-price retailer, plans to open about 170 new stores this year and add 1,600 overall in the long term.

The Framingham, Massachusetts-based company — parent of chains such as T.J. Maxx, Marshalls and HomeGoods — said it plans for store growth of 3 percent this coming year, which would bring its fleet up to 4,850 locations by year-end. To facilitate that expansion, TJX will allocate $1.7 billion to $1.9 billion in capital expenditures for new stores as well as remodeling and relocating certain storefronts and investing in the company’s distribution network.

The annual report will include Warren Buffett’s annual letter to shareholders as well as information about Berkshire’s financial position and results of operations. Berkshire’s annual shareholder meeting is scheduled for Saturday, April 30th.

ACI Worldwide, a Miami-based payments software company with a major executive office in Omaha, has announced financial results for the quarter and full-year ended December 31, 2021.

Valmont Industries, Inc. announced an increase to its quarterly cash dividend to $0.55 per share, or a rate of $2.20 per share on an annualized basis. This represents an increase of 10 percent from the prior quarterly cash dividend of $0.50 per share. The dividend will be payable on April 15th to shareholders of record on March 25th. The Omaha-based company previously increased the dividend by 11 percent in February 2021.

Applied Underwriters, which is building a headquarters campus in Omaha’s Heartwood Preserve development, announced that it will acquire Catlin Specialty Insurance Company from the AXA XL group of companies, consolidating the company into the North American Casualty group of companies in a move intended “to bolster Applied’s operating capabilities in support of its strategic partners as the E&S market hardens.” The transaction is scheduled to close during the second quarter of this as anticipated regulatory approvals are received.

WoodmenLife has promoted Sarah Theis to director of valuation. In this role, Theis will manage all activities related to the valuation of WoodmenLife’s annuity, life and health liabilities, including modeling and analysis for asset-liability management. She will also have oversight for reinsurance administration and experience studies.