Stories Coffee Co. has signed a lease for an additional location inside the future Good Life Sports Bar & Grill building under construction in Gretna near U.S. Highway 6 and Lincoln Road. Stories, which has an existing location near 114th & Dodge Street, plans to open late spring or early summer.

Build out is wrapping up on Saffron Urban Kitchen, an upscale, locally owned Indian restaurant. Saffron will occupy a 4,500 sq. ft. corner space at 6706 Frances Street next to Herb Sainte and across the street from Lululemon. Saffron will have a full menu of gourmet Indian Cuisine and a premium cocktail bar.

Let It Fly, a sports bar in Sioux Falls, S.D. announced on its Facebook page this week that it plans to open an Omaha location sometime in 2022. The bar is offering a special promotion to Creighton Bluejays fans who will be in Sioux Falls this Saturday for Creighton’s game against BYU.

The Council Bluffs Chamber of Commerce held a ribbon cutting December 3rd for BAM Crossfit, located inside The Hub at 7 South 4th Street in Council Bluffs. 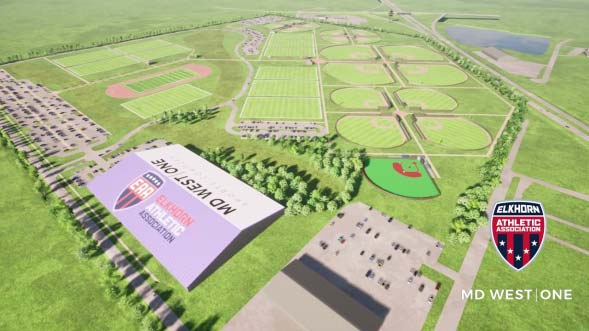 Elkhorn Athletic Association has started working on its 144-acre regional sports complex near 264th and U.S. Highway 275 in Valley. The complex will be known as the MD West ONE sports Complex.

“This project is intended to be a regional destination for generations to come and help meet the demands of our growing community,” said Bruce ONeel, executive director of the Elkhorn Athletic Association. “We want to reinvest in our youth and provide much-needed facilities by fulfilling our groundbreaking vision for the future. With passion, generosity, bold ambition, and innovative thinking we focus our efforts on building a state-of-the-art sports complex that will become a signature destination for outdoor youth athletics and community recreation − not just for the Elkhorn and Valley communities but for the greater Omaha area and the Midwest region.”

The total investment will be $50 million with funds coming from a public/private partnership. The complex will be built in two phases with Phase I opening in the spring/summer of 2023. Phase II will open in 2026.

Here are some of the project amenities:

The complex is projected to attract more than 900,000 visitors over a 35-week outdoor sports season each year. That represents an 87 percent occupancy model once fully built.

ONeel expects the complex to generate ancillary development including two limited service hotels nearby and 30,000 sq. ft. of retail space that would serve visiting athletes and their families.

Broadmoor Development is planning a 550-unit apartment complex on a 14-acre lot near 144th & Blossom Avenue in Heartwood Preserve. To be known as The Broadmoor Preserve, the complex will consist of multiple buildings. Construction should begin summer of 2022.

Ralston leaders announced this week that the city’s 4,600-capacity arena will become the Liberty First Credit Union Arena starting January 1st. The Lincoln-based credit union paid $1.675 million to purchase the naming rights for a 10-year period. The arena, which opened in 2012, had previously never had a naming-rights partner.

The Omaha Planning Board last week recommended approval of a $3.9 million Tax Increment Financing request on the part of F&J Enterprises to build a 150,000 sq. ft. warehouse at 5906 Abbott Drive. Located on a 13-acre lot just northwest of Eppley Airport, the $21 million building would have room for up to six tenants.

MH Hospitality is requesting $2 million in Tax Increment Financing from the City of Omaha for its Maverick Landing development on the site of the former Ramada CoCo Key Hotel just north of 72nd Street and Interstate 80. The old hotel is currently being demolished. Plans call for an $11 million, 85-room Fairfield Inn & Suites hotel, plus multi-family, office and retail buildings.

Uptown Properties, LLC plans to construct a five-story apartment building at 30th & Mason. The building would have 82 units plus 50 indoor, ground-floor parking spaces. The Omaha Planning Board approved the project last week, but construction can’t begin until the City Council approves.

This is the seventh consecutive year Moody’s and S & P have assigned high bond ratings. Both cite revenue growth, increasing reserves, and fiscal stability as factors in the bond ratings. The Cash Reserve Fund is $20.7 million, up from $4 million in 2013. General Fund revenue growth is projected to increase 3.52 percent in 2022.

Real Estate News from CoStar – Kroger Co., the nation’s largest grocery store chain, is still growing, debuting another customer fulfillment center, this one in North Carolina. It’s all part of an expansion strategy that involves robots and artificial intelligence but not new stores.

The company, headquartered in Cincinnati, Ohio, said on Wednesday it was building a 200,000-square-foot center in the city of Concord in Cabarrus County near Charlotte, to handle online grocery deliveries. The facility is expected to be operational within 24 months after the site breaks ground and will employ up to 700 workers over the next five years.

Kroger — which operates stores under multiple names including Baker’s Supermarkets in Omaha — is building out a network of customer fulfillment centers that incorporate AI, advanced robotics and automation to deliver food and household goods to customers who order online. Kroger Delivery is a beachhead for the company, increasing its reach where it already has a foothold and expanding its services in parts of the country where it doesn’t even have brick-and-mortar locations.

ACI Worldwide, a global provider of digital payment software with a major executive office in Omaha, has been recognized by leading international research firms including Forrester, Mercator and Omdia for the company’s leadership in Payment Hub capabilities.

Werner Enterprises has announced a new data integration with the Decisiv Service Relationship Management (SRM) platform into its Werner EDGE Application Programming Interface (API) powered applications. Werner is the first carrier to implement this integration, which aims to expand Werner’s repair network to more than 13,000 repair shops in the company’s vendor network. Werner currently has integrated with over 33 percent of its comprehensive vendor network for improved efficiencies as part of an ongoing innovation strategy.

Green Plains Inc. has released its inaugural sustainability report, outlining environmental, social and governance priorities, progress and targets. The report details a number of significant goals, including a commitment to carbon neutrality in operational emissions by 2050. In addition, Green Plains has achieved its goal of increasing diversity on the Board of Directors and has completed a significant Board refreshment initiative.

Can Steak Be “Cheesy” and “Corny?” Omaha Steaks is getting creative, having just released “Deck the Steaks,” the sing-along holiday cooking song. The parody holiday carol is a new version of a time-honored classic, including authentic sounds of Omaha Steaks cooking preparations – from steaks hitting cutting boards to meat sizzling on a hot grill and salt and pepper grinders shaking. We’re not sure if it will become an annual Christmas classic, but you can judge for yourself.

Thayne Griffin has been promoted to vice president of finance at Mutual of Omaha. His team is responsible for producing the Annual Financial Plan; quarterly forecasts; and explaining month-to-date, quarter-to-date, and year-to-date actual vs expected financial results. Griffin joined Mutual of Omaha as a strategic business unit finance director in 2018. Before joining Mutual, he was an actuary at Northwestern Mutual.

ACCESSbank has appointed Frank Stalla to the newly created role of senior vice president and director of administrative services. He most recently served as founder of an online education company.

CharterWest Bank Mortgage has hired Chris Banyay as vice president and mortgage sales manager. He most recently served as a loan production manager in Omaha. He holds a Master of Business Administration degree from Ashland University and an undergraduate degree from the College of Wooster.

Lutz recently transitioned Andrea Barton, Emily Coleman and Bethany Hofstetter to client resource positions within its firm administration department. In their new roles, they will be responsible for assisting tax professionals in obtaining and processing information for accounting clients as well as providing general administrative support for multiple departments as needed. Barton will lead the charge in Lutz’s Omaha office. Coleman will lead this initiative in Lutz’s Lincoln office. Hofstetter will head up Lutz’s Hastings and Grand Island office.