Crumbl Cookies has opened its first Nebraska store at 2883 South 168th Street. The Utah-based chain also has a store opening soon near 156th & West Maple Road. The new store has been so popular, management had to temporarily close to regroup and restock!

Koji is a new sushi and small plates restaurant opening the first week of May at Countryside Village near 87th & Pacific Street. Koji has the same ownership as the popular Yoshitomo restaurant in Benson. Koji will offer Japanese yakitori grilled over binchotan. “As far as I know, this will be the only spot doing this between Chicago, Dallas and the west coast,” said owner David Yoshitomo.

Lo Sole Mio Ristorante Italiano is for sale. The legendary restaurant at 3001South 32nd Avenue is listed for sale at $1.775 million, which includes the operating business and the real estate. According to the listing, Lo Sole Mio does more than $2 million in annual revenue. Repeatedly nominated as Omaha’s best Italian restaurant, the current owners plan to keep the restaurant open until a new owner comes forward.

Jojo’s Diner – West has opened at 13110 Birch Drive. That’s an end-cap space in a retail strip southeast of 132nd & West Maple Road. The original Jojo’s Diner is located in Benson.

You don’t hear this very often: there’s good news at Oak View Mall. A unique concept known as Canteen Alley has opened in the food court. It’s like a miniature food hall inside a mall food court. Canteen Alley consists of five concepts, each with a small storefront and a shared kitchen space. The concepts include Chicago Dog 42, Get Cheezi, La Prima Bella and Birdie Marie’s Bakery. Canteen Alley has its owned seating section with a bar.

A former Romeo’s building at 90th & Blondo has been torn down, making way for a future Kwik Shop gas station and convenience store. 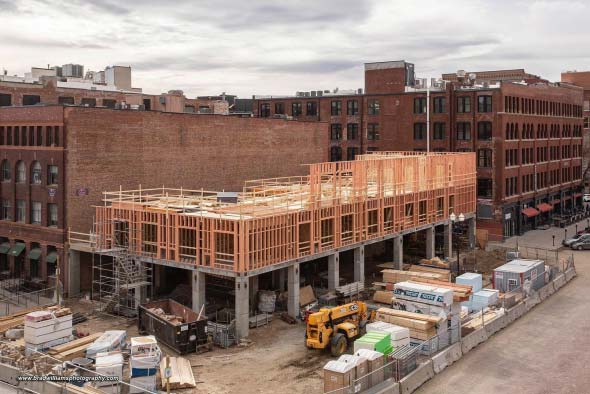 Our newest edition of the Grow Omaha Construction Update video, produced by Brad Williams, is now available on our website or by clicking HERE.

Grow Omaha’s construction videos are full of video footage and information about local developments. This latest episode features 20 projects ranging from in size from small to huge (more than a billion dollars). This week’s Big Story highlights just some of the projects you’ll see in the video…

Floor & Décor – This is an 80,000 sq. ft. flooring store under construction west of Nebraska Furniture Mart on Rose Blumkin Drive. The site previously had an NFM warehouse and was also used for outdoor truck parking. Floor & Décor is a national retail chain with multiple locations.

Hampton Inn – Dirt work is underway for a 6-story hotel on the southwest corner of 44th & Douglas Street that will bring much needed hotel rooms to the rapidly expanding Med Center area.

Moxy by Marriott – This 6-story hotel has been under construction for a while but has just started going vertical. Framing has reached the 3rd floor. The 105-room hotel is being shoe-horned onto a very small lot at 12th & Harney in the Old Market where the Old Market Diner was once located. The building will have a brick exterior to match the Old Market surroundings. Moxy by Marriott appeals to young professional and urban travelers. The concept is relatively new with only 25 locations in the United States. The closest existing locations are in Minneapolis and Chicago.

Bohemian Apartments – This project is located at 12th & William Street in the emerging Little Bohemia neighborhood. When complete, the 3-story building will have 112 units plus underground parking.

South Omaha – We feature two projects in South O. The first is the Q22 Senior Housing Apartments, a 40-unit building at 22nd & Q Street on the site of the former St. Agnes school and church. The second is a new fire station at 34th & Q Street that will replace the 1940s-era station at 25th & L Street.

I-80 logistics park – Located near 132 & Cornhusker Road, this industrial development has a last-mile warehouse for Amazon plus two yellow-and-black multi-tenant warehouses, one of which will house a Home Depot distribution center. Yet another industrial building is under construction on the north edge of the development.

Pacific Pointe – Work continues on a second 4-story apartment building southeast of 204th & Pacific Street. This will be a sister building to the one next door which houses Barrel & Vine

192nd Street – Ravello apartments at 192nd & Pacific are getting larger as a second phase is under construction to the north. Even further to the north, work is underway on a senior living facility which will include 70 independent living units, 54 assisted living units and 32 memory care units.

Omaha’s Eppley Airport is about to kick off a long-anticipated expansion project that will double the size of the terminal from 368,000 to 700,000 sq. ft. The $600 million project will begin next year and will take approximately four years. The number of gates will grow from 20 to 22. The concourse could be expanded to 28 gates if future traffic demands it.

Instead of the two, over-crowded satellite terminals, the expanded Eppley will have one long concourse with a single security entrance. That will allow much more space for restaurants and other retail tenants that are conspicuously lacking in the current building.

The Omaha Airport Authority is currently expanding and remodeling the airport’s vehicular entrance while also renovating the south parking garage. Those two projects cost a combined $29 million and are scheduled for completion later this year.

Construction is progressing on Blackstone Square, a 2-story, 10,561 sq. ft. building at 3863 Farnam Street in the Blackstone District. The building will front both Farnam and Harney streets. The ownership is seeking bar, restaurant or light retail tenants. Both floors have outdoor patio space. The Farnam Street (north) side of the building has a space for rooftop dining.

B&B Theatres plans to open a 24-screen cinema complex in the former AMC Oakview theatre, which closed in 2020. It will be the company’s first Nebraska location. The new theatre will have luxury electric recliners and laser projectors in every auditorium as well as a bar and food service. Missouri-based B&B Theatres is family owned and has 54 locations in 14 states.

Construction is just starting on a 12,000 sq. ft. retail strip near Southport Parkway & Giles Road in La Vista’s Southport area. The building will sit along the south side of an Embassy Suites hotel and will have to smaller retail buildings on either side of it.

The Omaha City Council approved $3.7 million in Tax Increment Financing for The View on 39th, a $27 million multi-family building planned for 39th & Dodge Street. The 136-unit complex will sit on the site of the notorious Travel Inn, which was torn down in 2006.

Real Estate News from CoStar –Google’s Wing is launching its first commercial drone delivery service in a major U.S. area in Texas this week, taking over a helipad once earmarked for Uber Elevate at Frisco Station to deliver goods by air to nearby residents in a hint that Wing may be planning to expand to other major cities.

Wing is expecting to roll out its drone delivery neighborhood by neighborhood, starting in two Dallas-area suburbs: Frisco and Little Elm. The drones can only deliver products from three Texas-based companies: Blue Bell Creameries, easyvet and Texas Health Resources, according to the new partnership. Wing is also offering drone delivery service in a separate agreement with Walgreens after a series of tests at its Little Elm location.

Triage Staffing, a healthcare staffing company based in Omaha has finalized the location of its new corporate headquarters. The building, located at 13609 California Street, more than triples Triage’s Omaha office space with more than 100,000 square feet. Ironically, the building previously had been home to a different medical staffing company.

Founded in 2006, Triage has experienced significant growth, and in 2021, was named for the sixth time to the Inc. 5000 List of Fastest Growing Companies, as well as ranking in the top 100 of the Inc. 5000 Regionals: Midwest.

Union Pacific Railroad has filed suit against the city of Oakland and major-league baseball’s Oakland Athletics over a proposed ballpark and related mixed-use development near Jack London Square, according to Trains magazine.

The railroad is challenging the project’s environmental analysis, saying in the suit filed in Alameda County Superior Court fails to consider and mitigate safety risks and other issues arising from “the large numbers of motor vehicles, bicycles, and pedestrians” that would have to cross UP’s heavily-used tracks adjacent to the project.

The trailblazing Omaha VA Ambulatory Care Center, designed by LEO A DALY and built by McCarthy Building Companies, has been named national Project of the Year and overall Best in Healthcare by Engineering News-Record (ENR). Representing the pinnacle of design and construction achievement in the United States., the project rose through ENR’s regional awards program in 2021 and received ENR Midwest’s best healthcare project award. It has earned more than a dozen design and construction awards to date.

Nate DeBoer has been promoted to vice president of portfolio strategies — general accounts at Mutual of Omaha. He supports the growth and profitability of corporate invested assets through strategic portfolio construction and tactical asset allocation strategies that align with the goals, constraints and risk tolerances of the organization. DeBoer joined Mutual of Omaha in 2008. He was promoted to managing actuary in 2013 and to director of portfolio strategies in 2017.