At the tiny Khao Niao, Thai and Vietnamese classics are made with care

At Saffron, well-executed Indian classics are great, and there’s more to come

The Dundee Dell is back for a new generation of locals

At Gather in Omaha, “something for everyone” turns out to be a rare success

West Omaha’s Popular Crumbl Cookies are Worth the Hype 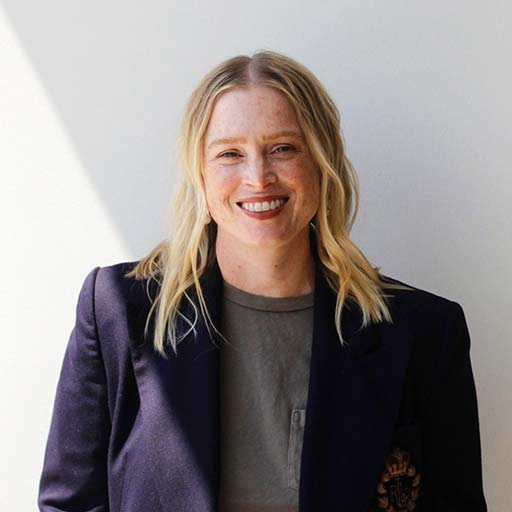 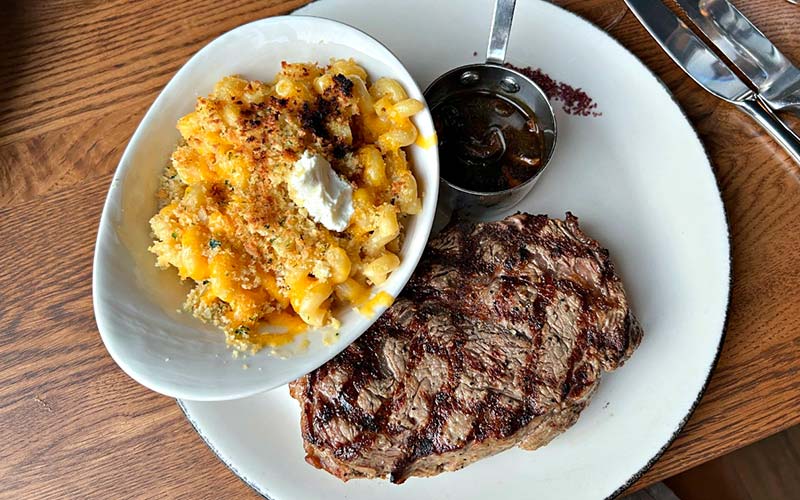 Dynamite Woodfire Grill, the restaurant inside the new Farnam Hotel at 12th and Farnam streets, presents diners with an interesting proposition: Would you rather dine with us, or at The Boiler Room? With us, or at V. Mertz?

For its price point — our dinners, after tip, stretched to $300 one night and topped $160 a second — it’s a question worth asking. From the crowds we saw during both visits, lots of diners are certainly answering with a “yes” to Dynamite.

For me? I’m still not sure.

When Dynamite knocks out a hefty plate of short ribs, a nicely cooked piece of fish or a double smash burger from its massive wood-powered grill, it is very good.

But we also encountered stumbles, including a bland corn chowder and a steak that, while nicely cooked, badly needed salt. Seasoning missteps can be corrected, but for the price point, these kinds of mistakes shouldn’t happen.

Dynamite opened in spring 2021, bringing a high-end dining experience to the Landmark Center as part of a reimagining of the building. The restaurant sits off a large lobby area, where we saw many guests having a cocktail, and is adjacent to a bar called Catalyst, which faces Harney Street on the building’s opposite side. Catalyst also has a large outdoor patio, though it was closed when we visited.

I like the eye-catching design of all the spaces, and the vibrant, chatty crowds. It’s a fun place to hang out, for sure. Service, across the board, is friendly and knowledgeable.

Executive Chef Robert Murphy said the grill is a “wow factor” for many guests, and it plays a big role in how the menu is developed. When he developed the most recent iteration of that menu, he said the grilled flavor shows up here and there across the board, in things like charred corn or mushrooms.

The cooks working that grill are encouraged to chat with customers, something we experienced during our second dinner, when we sat at the bar next to the kitchen.

That open kitchen and searingly hot grill served some dishes we really enjoyed, particularly when it comes to seafood.

A shrimp and polenta dish on the appetizer menu arrived with four large, perfectly cooked shrimp on top of a bed of rosemary-scented polenta, small squares of crispy pancetta and a drizzle of verdant roasted garlic gremolata. The only thing we didn’t enjoy were the rectangles of half-melted pecorino romano, which seemed like an unnecessary addition to an otherwise delightful dish.

Also nice is the miso-glazed Jail Island salmon, an Asian-inspired dish that came served atop some tender, big bok choy leaves and topped with roasted wild mushrooms, chili and a dashi-based sauce. I was unfamiliar with Jail Island salmon, but research told me it’s sustainably raised off the Atlantic coast of Canada. It tasted fresh and had a nicely executed, medium rare center and a crisp char on its exterior.

Lots of people have mentioned to me the complimentary cornbread that comes at the start of any meal at Dynamite and, for a freebie especially, this bread is soul warming. It comes warm in a cast iron pan with a side of honey butter; I kept it to one wedge but could have easily eaten several more of the crumbly but moist bread dotted with fresh herbs.

Reuben croquettes on the appetizer menu immediately caught my eye, and I was reminded of the old Localmotive food truck rounder when they arrived. These are more cream-cheese forward than an actual Reuben, and the flavors of corned beef and sauerkraut are more subtle than I wished for. Nevertheless, I’m guessing these have to be a crowd pleaser.

There’s lots of beef on the menu at Dynamite, including a full lineup of Certified Piedmontese steaks. We tried the 14 oz. boneless prime ribeye, one of my favorite cuts. It’s an enormous slab of meat, and comes with a side sauce — we got mushroom demi glace — and a side dish. The meat is incredibly tender, and the sear on the exterior well-executed. I just wished the steak had been salted to bring out its flavor. A drizzle of the demi glace did help, but I generally prefer my beef without a sauce.

Murphy said each cook in the kitchen is supposed to reference the recipe for each dish, even if they have made it many times.

“Salt is the most under and over used ingredient in the kitchen,” he said, also noting that the restaurant, like many others, has faced staffing and retention challenges.

Much better was the short rib, another massive slab of beef that put me in the mind of an old-school pot roast turned up to eleven. The flavor of the open fire is all over this dish in the best way: tender meat and plenty of seasoning with a smoky finish. Wood-roasted chanterelle mushrooms are nicely done, and the polenta is creamy and rich. Roasted whole heirloom carrots and bright green peas finish the dish.

We both liked Dynamite’s double smash burger, made with Morgan Ranch wagyu and cooked to a medium-pink center. It comes topped with American cheese, a smoky tomato bacon jam, pickles and crisp fried shallots. My only issue: I wish the bun had been warmed.

Side dishes are mostly good. The French fries are airy, crisp and salty. We upgraded the steak’s side dish to the truffle macaroni and cheese, which was absolutely delicious. For those old-school readers, this is Marks Bistro-level mac and cheese, with plenty of truffle flavor, al dente twirls of cavatappi, creamy cheese and a crisp panko finish. It’s worth the extra few bucks.

We split a bowl of the hatch chili corn chowder, a special one night, and found it disappointingly bland, with almost no flavor from the seasonal chili or the corn, the two reasons we ordered it.

The restaurant’s menu is on an electronic tablet, and it displays a photo with each dish. Some of the photos have been updated to what the current menu items look like, and some have not. In particular, the salmon, the burger and the Reuben croquettes the diner receives look different from what’s pictured. If one orders with their eyes, they might be surprised with what arrives at the table.

Dynamite is expensive. We spent $32 on two cocktails plus tip one evening at Catalyst, before we even sat down to dinner. The miso salmon and short rib entrees are $37 and $36 respectively, and the ribeye clocks in at $65. An Old Fashioned cocktail another night set me back $15.

Pricing has been a challenge since he started around five months ago, Murphy said, especially with proteins, beef in particular.

Rather than changing menu prices weekly, he said he built in a “safety net” so while prices may change, the restaurant can stay closer to being profitable.

“It fluctuates up and down, but it never becomes a critical path,” he said.

At the end of the day, he said he ultimately tries to focus on the restaurant’s end goal.

“We want to introduce new flavors and new dishes, but also keep the integrity of what we are trying to do,” he said.

Though prices are higher at all restaurants because of supply chain challenges and rising food costs on the back end, Dynamite’s prices, to me, feel more “special occasion” than “random Wednesday night.” Its prices firmly sit next to the aforementioned Boiler Room and V. Mertz, and all of the city’s high-end steakhouses.

There’s a lot to like here, to be sure. But, to me, Dynamite is currently a step behind some of those restaurant companions. 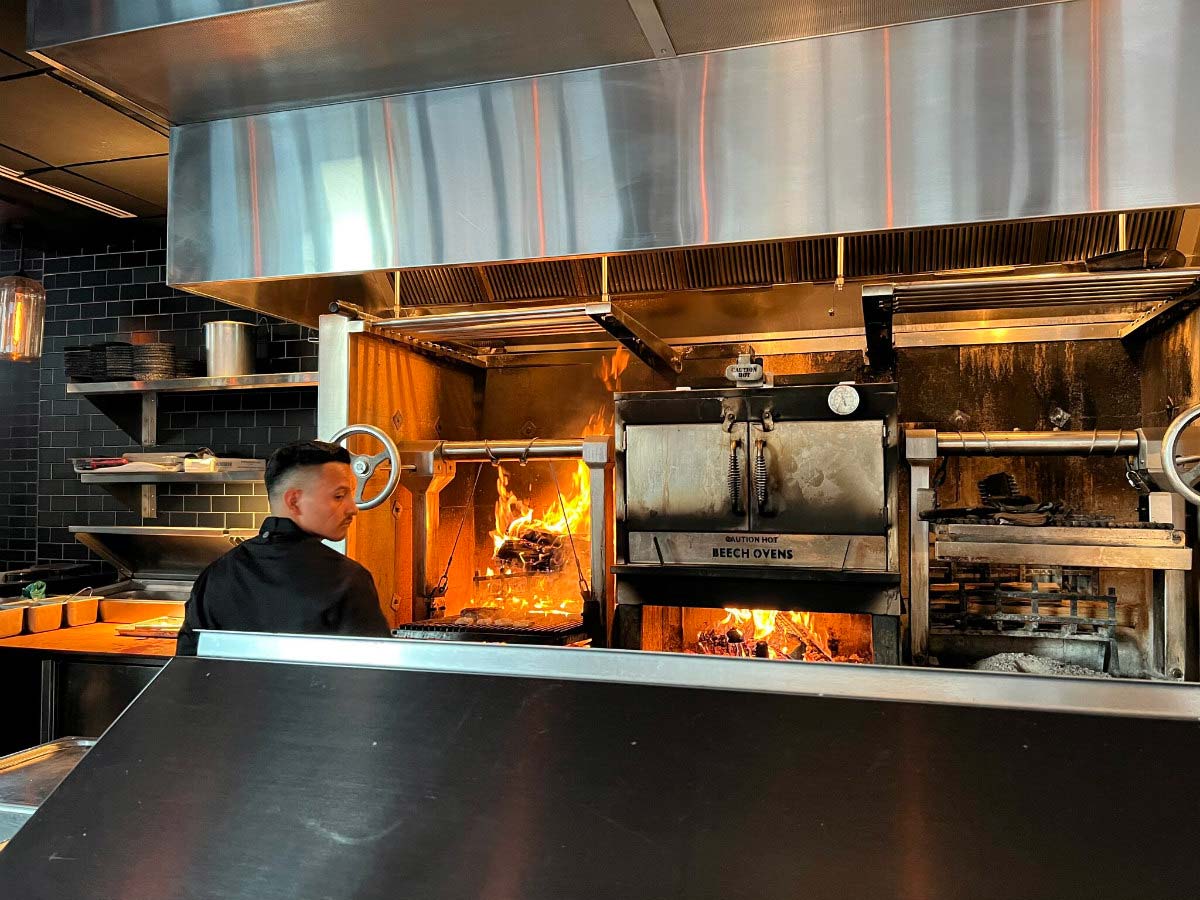 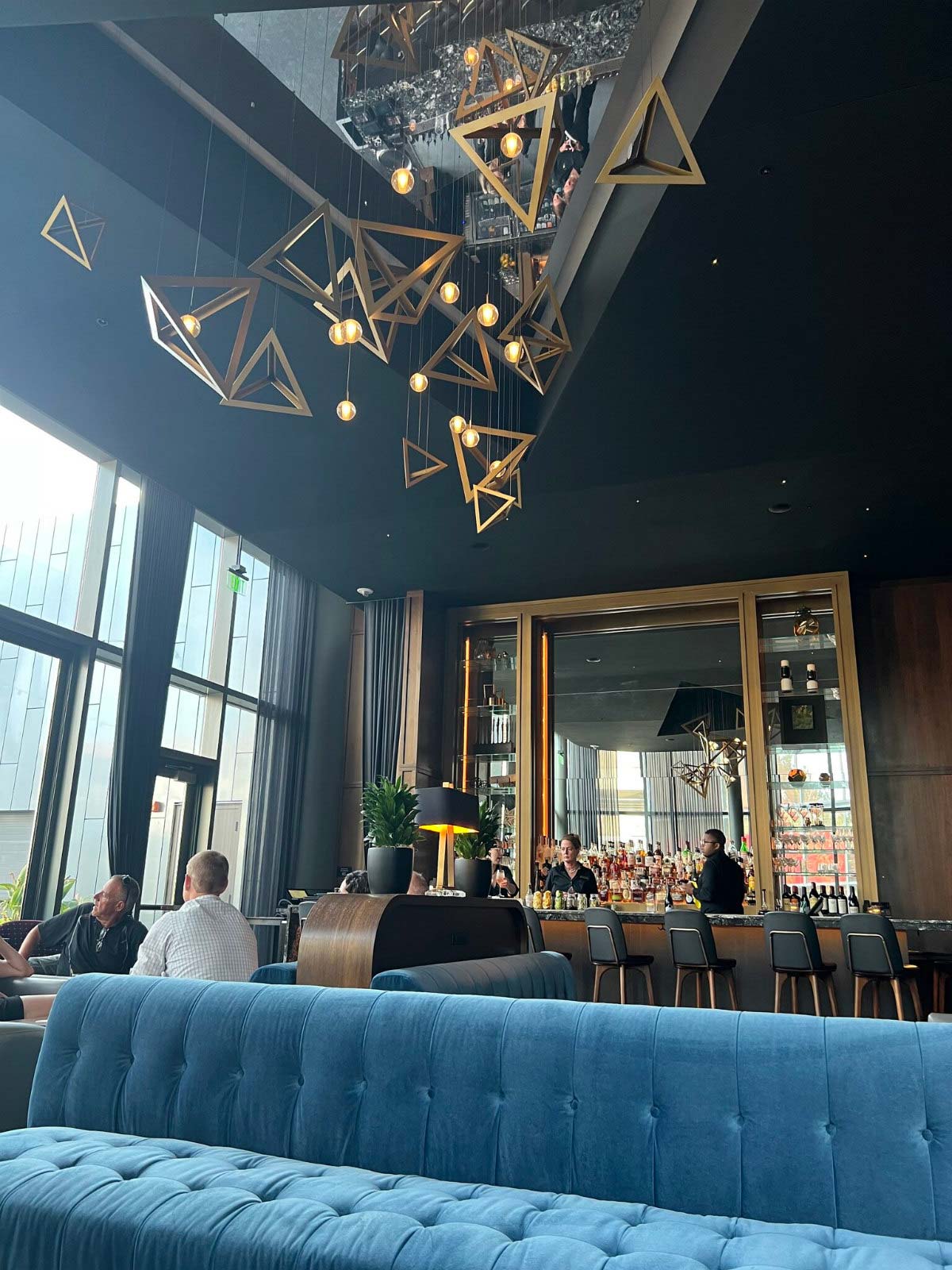 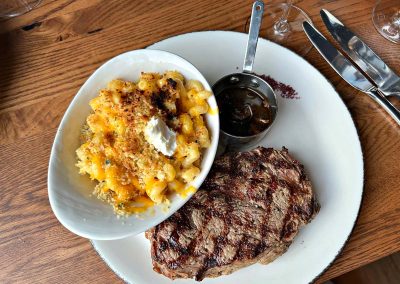 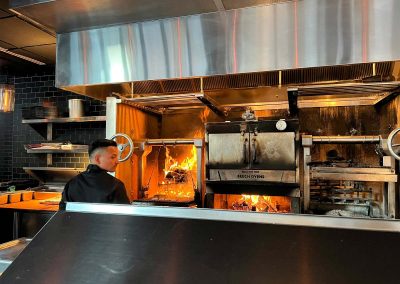 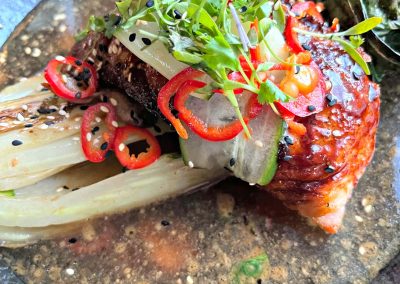 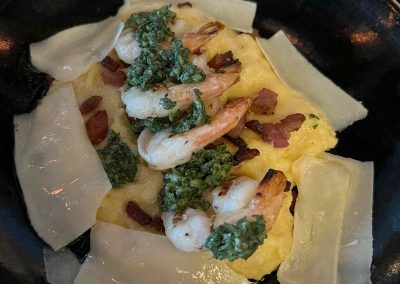 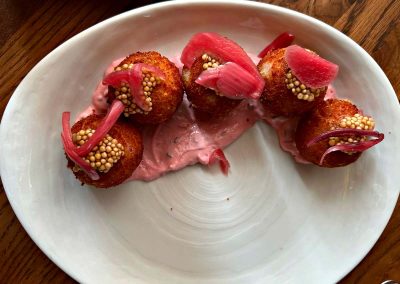 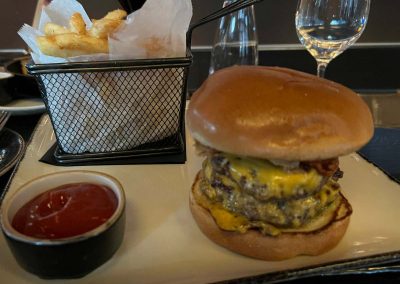 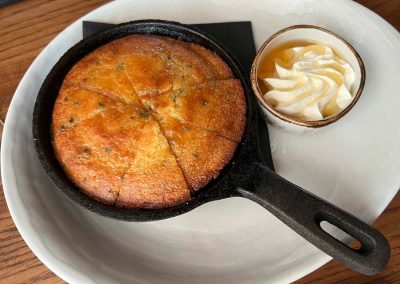 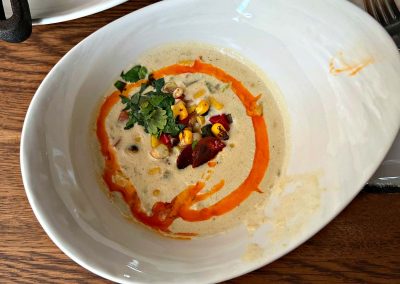 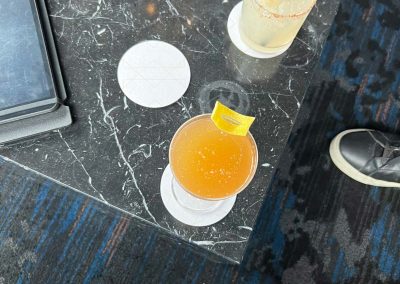 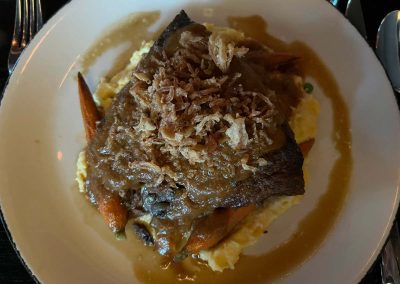 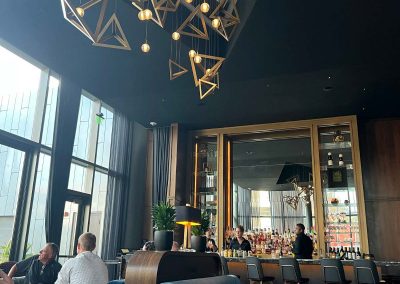