Lincoln restaurant coming to Omaha? – Muchachos, a popular New Mexican BBQ fusion restaurant and food truck in Lincoln is considering an Omaha location. Owner Nick Maestas checked out a potential Omaha location yesterday but said he wouldn’t be able to open it for about 12 to 15 months. Muchachos was featured during ABC’s national telecast of the Nebraska vs. Michigan football game on October 9th.

Interior build-out is underway on Rebel Monkey Pizza which plans to open in the former Pudgy’s Pizzeria space at 16919 Audrey Street. The menu is indicative of a classic pizza joint with a few gourmet twists.

Shug’s Comfort Food has opened at 105 West Mission Avenue in Olde Town Bellevue. The restaurant’s Facebook page says, “Our specialty if food cooked from the soul.”

A new business known as “Godega Market” has requested a liquor license for 423 South 11th Street in the Old Market. Other businesses seeking liquor licenses are Bottles & Brews at 10745 Mockingbird Drive, Rookies Bar & Grill at 1702 North 120th Street, Mouth of the South at 1111 Harney and Good Evans at 1040 South 74th Plaza.

Construction is in full swing on the future ALDI grocery store that is replacing the former Fresh Thyme Market in Baker’s Square southwest of 132nd and West Center Road.

Spencer Morrissey and Deb Graeve-Morrison of NAI NP Dodge are looking for a restaurant/bar concept to fill a unique 2,124 sq. ft. end-cap space in the newly renovated 8601 Dodge building. The bay, which is located on the far east side of the building, also has access to a patio space for outdoor dining. 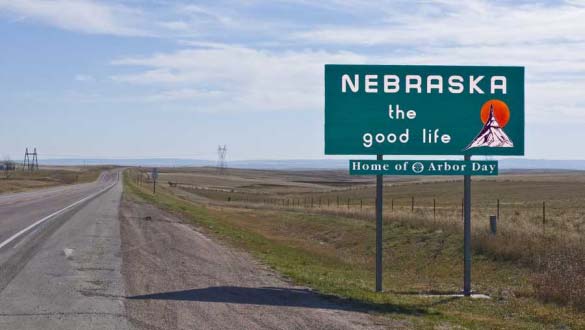 Nebraska consistently has one the nation’s lowest unemployment rates, so a new initiative to recruit talent to the state is welcome news. Our “people shortage” of people is about the only thing slowing down the Omaha metro area’s economy at this time.

Nebraska Gov. Pete Rickets earlier this week announced a $10 million marketing campaign called, “The Good Life is Calling.” It will target former Nebraskans and other residents primarily located within a 500-mile radius of the state capitol. Key media markets include Kansas City, Minneapolis, Chicago and Denver.

The campaign is funded by federal CARES Act money.

Regarding Omaha, SmartAsset wrote: “Census estimates show that the median household income in Omaha, Nebraska is about $61,300. Additionally, the median home value is $175,800. Using those figures along with the previously described methodology, we estimate that the average time to homeownership in Omaha is less than two and a half years.”

Skylark, LLC, plans to build a 5-story, mixed-use building on the southeast corner of 38th Avenue and Dodge Street. The $22 million building would include ground floor commercial space and 131 apartment units on the upper floors. Three existing houses will be demolished to make way for the project. It’s the latest Transit Oriented Development to take advantage of the Omaha Bus Rapid Transit’s Dodge Street line.

Nebraska has nearly two jobs open for every unemployed person. The state has 1.80 unfilled jobs per unemployed person, the number-two highest rate in the country behind only Washington, D.C., according to CareerCloud. Other top-10 states in our region of the country are South Dakota (6th) and North Dakota (9th).

Construction is planned to begin in 2022 on the Hillcrest Highlands, a senior-living property planned for 34 acres at Highway 6 and Schofield Drive in Gretna. The $87 million project would cater to residents ages 55 and up. The main building would 175,000 sq. ft. with 82 apartments.

Omaha-based Intrado Corporation (formerly West Corporation) has sold its two-building Miracle Hills Corporate Center to Lockwood Development of Omaha. The sale includes the four-story, 148,552 sq. ft. building at 11650 Miracle Hills Drive and the four-story, 97,839 sq. ft. building 11808 Miracle Hills Drive. The center also includes a 900-plus stall parking garage. Lockwood Development is planning an extensive remodel of the 11808 building and is working with several groups to lease the vacant space.

Creighton University has announced “Forward Blue,” the largest and most ambitious fundraising campaign in the school’s 143-year history. The $650 million campaign prioritizes student support, focusing on scholarships, campus improvements and mission-driven services and programs throughout Creighton’s nine schools and colleges, as well as athletics.

Real Estate News from CoStar – This week we focus on Omaha’s red-hot industrial real estate market which totals 96 million sq. ft. Industrial vacancy is only 3.1 percent at this time, which is about as low as you’ll ever see. The market is occupying 1.8 million more sq. ft. of industrial real estate now than it was 12 months ago. More than 5.7 million sq. ft. of industrial space is currently under construction. The basic asking rental rate is $6.61 per square foot.

Omaha-based Gavilon has opened a new grain facility in Huntley, Mont. The facility boasts a state-of-the-art slip form concrete elevator with 750,000-bushel (bu) storage capacity and more than 1,500,000 bu external storage. The facility also was built with several efficiencies, including the ability to unload trucks at two receiving pits, each with 38,000 bu/hour capacities, as well as a 120-car shuttle loading capacity in six hours.

Kutak Rock of Omaha has entered the Florida legal market. Nine shareholders and one associate from the firm Hopping Green & Sams will join Kutak Rock and establish an office in Tallahassee.

Valmont Industries, Inc., an Omaha-based global provider infrastructure and irrigation equipment, had record third-quarter net sales of $868.8 million, an increase of 18.4 percent, with growth in all segments led by significantly higher Irrigation sales.

Omaha-based Sapp Bros. is opening an in-house restaurant known as “Burrito Bros.” at its travel center in York, Neb. toward the end of November.

Omaha-based Berkshire Hathaway, Inc. has named Susan A. Buffett and Christopher C. Davis to its board of directors. Buffett, daughter of CEO Warren Buffett, is the chairman of the Susan Thompson Buffett Foundation and chairman of the Sherwood Foundation, both of Omaha. Davis is chairman of Davis Select Advisors, an investment management firm that oversees more than $25 billion in assets.

Election Systems & Software of Omaha has named Brandon Clifton as senior vice president of government affairs. In his new role, Clifton will work to strengthen ES&S’ support of states and jurisdictions in their work to conduct secure, accurate and transparent elections.

Marie Clifford, long-time owner of The Afternoon boutique store, has died at age 92. The Afternoon was a mainstay at the Westroads for decades. Other locations operated for shorter periods of time at Midtown Crossing and in Minneapolis and Chicago.

Baird Holm associate Hannah Fischer Frey has been named to the 15th Class of the Nebraska State Bar Association Leadership Academy. The NSBA Leadership Academy’s mission is to develop the leadership skills of the participants to allow them to make greater contributions to the legal profession and their community.