This Place Is Going For the Birds – Dirty Birds, a Nashville-style spicy chicken joint inside the Switch Food Hall (Blackstone District) plans to open a second location in the Flatiron Building at 1722 St. Mary’s Avenue. The 1,800 sq. ft. space was previously home to the Flatiron Café, a sit-down, American cuisine restaurant that closed in May of 2020.

Sebastian’s Southern Crab is getting closer to opening at 843 North 98th Street near the Westroads, but it’s not quite ready. The homemade-style seafood restaurant was supposed to open last summer but has had to endure delays. Looks like opening should now take place near the holidays.

Hardy Coffee has opened a small drive-through coffee shop at 144th & Meadows Parkway. That’s just north of the Sapp Bros. area. The space was formerly a used as a bank’s branch office, so the drive-through was already in place.

Construction bids are due today for the 80,000 sq. ft. Floor & Décor store planned for Rose Blumkin Drive and Harney Street. The site has long been used for truck trailer storage for Nebraska Furniture Mart. The approximate start date for construction is January 3rd. Floor & Décor is an Atlanta-based specialty retailer of hard surface flooring and related products with 120 locations nationwide.

Two new tenants are coming to Regency Court. Valo Wellness Spa plans to open early next year in a 4,240 sq. ft. space next to Borsheim’s and across from Williams Sonoma. For the One Bridal is a designer bridal boutique now open in a 1,700 sq. ft. space between Love Sac and Garbo’s Salon. 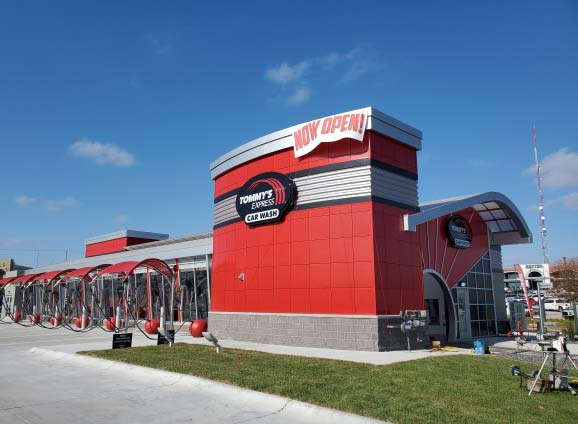 In 2018, Ray Anderson Jr. of Grayscale, Inc., opened the metro area’s first Tommy’s Express Car Wash near 132nd & I Street. The business was an instant hit and triggered a seismic sea wave of car wash development.

Now multiple car wash brands are racing to capture market share and attract thousands of Omaha customers who pay monthly memberships, entitling them to unlimited car washes between the hours of 6 a.m. and 9 p.m.

Michigan-based Tommy’s Express has been around for 40 years, but in recent years, the franchisor of membership car washes has experienced rapid growth. The company how has 172 locations in 30 states ranging from coast to coast. The company opens five to six locations every single week.

“Tommy’s Express is the nation’s leading car wash with superior technology,” Anderson said when asked why he purchased a Tommy’s franchise. “They have an efficient user app and license plate recognition, which allows customers to fly through our app lane.”

In addition to Grayscale, Inc, Mitchell Management Company has franchise rights in the metro area. Mitchell is currently building a Tommy’s Express on the southwest corner of 84th Street and Nebraska Highway 370 in Papillion. The franchisee is planning additional locations in Bellevue and Council Bluffs.

Together, the two Omaha-area franchisees are planning a total of 21 Tommy’s Express Care Wash locations. But Tommy’s is not the only brand opening membership washes in Omaha.

Georgia-based Tidal Wave Auto Spa recently opened a Bellevue location. Additional locations are under construction along West Dodge Road at 87th Street and 120th Street. Rocket Carwash has several metro locations open with many more in the planning stages. Missouri-based Club Car Wash has opened near 72nd & L and has locations under construction at 108th & Maple and 72nd & Sorensen Parkway.

Indeed it feels like you can find a car wash under construction along every major street in town. “Right now, it’s the wild west of carwash development,” Anderson said.

So why are these membership carwashes so popular right now?

Well for one thing, it’s not just an Omaha phenomenon. Carwash development is blowing up nationwide. Americans, it seems, are in love with their cars and they want them to be always clean.

A 2020 study commissioned by the International Carwash Association (yes, there is such a thing) claimed there were nearly 63,000 carwash locations nationwide with the industry generating $11 billion annually. Those numbers have only increased with all the new upscale membership car washes.

With the healthy economy and a lot of recent government stimulus money, more people have disposable cash for things like car washes. What’s more, the recent shortage of new cars on the market could be compelling people to take better care of their current cars, knowing they can’t easily trade them in.

And here’s one other reason why membership carwashes could be catching on so quickly. According to that same carwash association, home washing is declining in popularity. Americans who sometimes wash their cars at home have declined from 54 percent in 2016 to 42 percent in 2019.

We live in a time-starved world that values speedy and convenient service. In such an environment, membership carwashes apparently make a lot of sense to more and more customers.

A local developer is planning a unique in-fill project for a long-vacant lot in the middle of a southwest Omaha business park. Ted Grace of 148 Place, LLC, plans to build a 176-unit apartment development in the Alltech Business Park northwest of 144th & F Street.

Nebraska Warehouse Company is building a 172,000 sq. ft. industrial building southwest of Nebraska Highway 50 and Platteview Road in Springfield. Completion is planned for March. Plans call for construction to begin on a second building at the same site next summer.

Scooter’s Coffee will relocate its corporate headquarters next summer from 10500 Sapp Brothers Drive to a 27,000 sq. ft., top-floor space in a four-story office building at 11808 Miracle Hills Drive. Scooter’s is a national coffee franchisor with approximately 400 locations in 30 states.

Update on the Riverfront Parks Renovation – Workers will lay 55,000 sq. ft. of sod this month at Gene Leahy Mall. The process will take several weeks. Before the sod could be installed the soils had to be graded, irrigation infrastructure installed and layers of specialty soil added. The park is scheduled to open seven months from now.

Construction bids are due November 11th for the planned Blackstone East project, a 9-story mixed-use building planned for a surface parking lot immediately west of the Kimpton Cottonwood Hotel. This $44 million project will have 161 apartment units and 20,000 sq. ft. of ground-level retail space.

Streck Laboratories is planning to build an 84-unit apartment development at 117th & Harrison Street in La Vista near its headquarters and manufacturing plant, according to the Omaha World-Herald. The “on-campus” apartments are designed to help Streck attract and retain talent in a tight labor market by providing discounted rents to employees.

To prepare for Eppley’s future growth, the Airport Access and Parking Modernization program is expanding the roadway leading to the terminal and modernizing the south garage. When complete, these projects will improve customer service by providing enhancements to capacity, efficiency, safety, and security. Access to the terminal and south garage will be maintained during all phases of construction.

Real Estate News from CoStar – Public Storage, which has expanded rapidly in the Omaha metro area, is spending $2.3 billion to buy more than 100 facilities across 16 states. The California-based company is capitalizing on shifts home office life that accelerated in the pandemic and it expects to linger in coming years.

Public Storage has boosted its nationwide location count by 20% in the past 18 months, primarily through acquisitions, while building new locations and scouting sites for a development pipeline that totals more than $730 million in upcoming projects. Public Storage has more than 2,600 U.S. locations serving more than 1 million customers.

Buildertrend, an Omaha-based software company, was honored as the 2021 Volunteer Organization of the Year recipient by United Way of the Midlands for its resilient workplace culture committed to volunteerism. This is the fourth year the award has been given and the first year Buildertrend has been selected as the recipient.

As private sector activity in the aerospace sector increases, Applied Underwriters of Omaha has joined forces with former PartnerRe D&F Space Team (Direct and Facultative), led by veteran, Jon Lewis, to form Applied Underwriters Aerospace. The new operation will be based in Washington, DC.

Since declining to a record low in April of last year, the Creighton University Mid-America Business Conditions Index, a leading economic indicator for the nine-state region stretching from Minnesota to Arkansas, has remained above growth neutral for 17 of the last 18 months. The index, which ranges between 0 and 100, climbed to a very healthy 65.2 from September’s 61.6.

Noddle Companies has welcomed Trivium Life Services to its River’s Edge development in Council Bluffs. Trivium occupies the second floor, with open workspaces that enjoy floor-to-ceiling glass, a large training facility and break spaces with views of the Missouri River and downtown Omaha.

Werner Enterprises has been named among the 2021 “Top Companies for Women to Work For in Transportation” by the Women in Trucking Association’s Redefining the Road magazine. This is the fourth consecutive year Werner has received this recognition.

Mutual of Omaha has promoted Jennifer Fleck to vice president of actuary. She is responsible for product pricing and profitability of group Long Term Disability, Short Term Disability and Paid Family and Medical Leave. Fleck joined Mutual in 2019 as a Product Performance Director. Before joining Mutual, she was a Consulting Actuary at Milliman.

Randy Skierka of Omaha has been named national vice president of sales for Fresno, Calif.-based Integrated Prescription Management. He leads a sales team located across the country. The company is a full-service, middle market pharmacy benefits manager.

Baird Holm partner David Levy has been elected to serve as the president for the History Nebraska Board of Trustees. Levu represents clients in zoning, land use, energy, environmental and general real estate matters. He is a registered lobbyist in the state of Nebraska.

Omaha-based Lutz has added Jeremy Greenfield as senior project engineer and Curt Topf as business development manager. Greenfield has more than nine years of IT experience and graduated from UNO where he studied management information systems. Topf has 20 years’ experience in sales and technology. He graduated from Wayne State College with a degree in business administration.