Eating at Aksarben – Two new restaurants have opened inside the Inner Rail Food Hall at Aksarben Village. Rougamo & Boba is a traditional Chinese puff pastry and boba tea vendor. The other new tenant is Culprit Cafe, which also has locations in Midtown Crossing and downtown. According to Inner Rail manager Matt Taylor, Culprit Cafe has “the most amazing corned beef sandwich for lunch you’ve ever had.”

Not Just Dynamite – Last week we told you about Dynamite, the wood-fired restaurant coming soon to the new Farnam Hotel at 1299 Farnam Street. Good news — there are two other places opening in that building: 1. Catalyst Urban Lounge & Terrace will be Omaha’s largest outdoor cocktail bar serving small plates and creative drinks; 2. Lone Tree Landing is a cozy coffee shop and deli.

Downtown Beer Coming Soon! – Kros Strain Brewing will open a second taproom location inside the Ashton Buiilding at 1229 Millwork Avenue in North Downtown this summer. Kros Strain will sell all the award-winning beers made in its La Vista production facility plus locally made cider, wine and non-alcoholic opptions.

This Little Boutique Will Be Huge – Scarlet Highway is a new-to-Nebraska retail concept opening this weekend at Nebraska Crossing in Gretna. The store is located between Vineyard Vines and Michael Kors and sells “consciously curated gifts and apparel for your modern journey.” It features products locally sourced from more than 100 artisans and small businesses that focus on organic products, sustainable practices and charitable contributions.

Pass the Popcorn – While many Alamo Drafthouse Cinema locations around the country have closed permanently, that’s not the case in Omaha. Both the Southport and Midtown Crossing locations are reopening in June. Exact details will be available soon.

A Garden in the Village – Clorophyll by Kinghorn Gardens is now open at 1917 South 67th Street in the HDR building at Aksarben Village. This plant boutique is open Monday through Saturday just across from the Inner Rail Food Hall.

Catch an Auto Wave – Nebraska’s first Tidal Wave Auto Spa is under construction at Cornhusker Road and Kennedy Freeway in Bellevue on the site where a former Ruby Tuesday restaurant had been demolished. Tidal wave is a chain of full-service car washes based in Georgia with locations in nine states.

A Lot of Curry in a Very Big Hurry – Celebrity food challenger and professional eater Randy Santel (a.k.a. “Atlas) is participating in the MAHA Curry Challange today at Omaha’s Curry-In-A-Hurry drive-through Indian restaurant at 8303 Maple Street. His challenge is to finish 7 pounds of curry in 60 minutes.

What does Santel get if he wins? His picture on Curry-In-A-Hurry’s new “Curry Challenge Wall of Fame.” Oh, and the restaurant will pay for his food, so he’s got that going for him. The event is open to the public starting at 5:30 p.m. By the way, “MAHA” means “the ultimate” in Hindi.

Actually You Can Go Back in Time – We have heard from many people who missed one our previous newsletters and were suffering from FOMO – Fear of Missing Out – especially when it comes to our restaurant coverage. Don’t worry, you can access all of our past newsletters by going to GrowOmaha.com and clicking “Market Report” on the navigation bar! 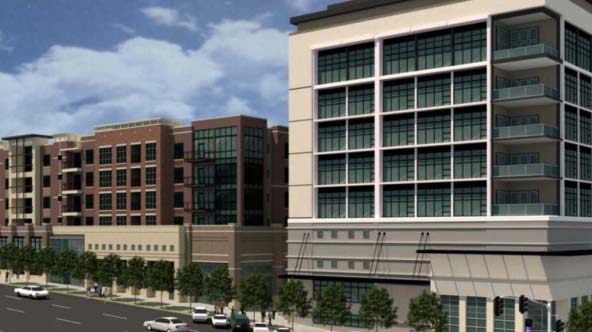 The first phase of construction will include 388 apartment units, of which 268 will be market-rate and 120 will be mixed income.

The Memorandum of Understanding includes an agreement that the city will sell the property to the developer and specifies a 2023 deadline for the developer to obtain building permits and submit plans. The MOU also offers tenants of the mixed-income housing units access to 150 parking spaces at reduced rates in the adjacent city-owned parking garage.

The Civic Auditorium was demolished in 2017.

The U.S. Department of Defense has chosen Omaha as a key pilot site designated to develop a federal program that will improve the nation’s ability to respond to future catastrophic events such as pandemics, natural disasters, or a direct attack on the homeland, according to a press release from Rep. Don Bacon.

The multi-federal department is designed to improve the National Disaster Medical System and to boost medical surge capability in the nation. Omaha was chosen because of the medical center’s leadership in meeting surge capacity, infectious disease control, readiness training and education as a key partner in the nation’s effort to improve overall health security and medical preparedness.

Omaha was one of five sites including Sacramento, Denver, San Antonio and Washington, D.C.

The site designation is an important milestone for the ongoing development of UNMC’s Project NExT, a transformational public-private partnership to create a federal, all-hazard health security disaster response space that is adaptable and leverages UNMC’s and Nebraska Medicine’s experience and global leadership in infectious diseases and bio preparedness.

Project NExT has been described as a $2.7 billion investment that would create 8,700 permanent jobs with an average annual salary of $75,000. The facility would be built on the site of the former Munroe-Meyer Institute on the UNMC campus’ northwest corner.

New Building in Midtown – Plans call for a 9-story, mixed-use building to be constructed on a large lot currently used for surface parking in the Blackstone District immediately west of the Kimpton Cottonwood Hotel. The land is bounded by 37th, 38th, Farnam and Harney streets. The $44 million project will have 161 apartment units and 20,000 sq. ft. of ground-level retail space.

Welcome to the City – After analyzing all Sanitary Improvement Districts in the City of Omaha’s zoning jurisdiction, Mayor Jean Stothert is recommending a small annexation package for 2021: Whispering Ridge West at 180th & Maple Street; Northridge at 180th & Pacific Street and a small area at 156th & Fort Street. The annexation would add 248 residents based on 2010 census figures.

Construction is underway at “Ascend on 75,” a three-building apartment complex just off Highway 75 near the Wolf Creek development in Bellevue. The complex will include 107 apartment units and a clubhouse. Completion is planned for August 2022.

Habitat for Humanity is partnering with the City of Omaha to build affordable housing on a long-vacant, 15.75-acre site near 51st & Sorensen Parkway once occupied by the controversial Wintergreen Apartments. The city will transfer the property to Habitat Omaha for $1 under Nebraska Community Development law. Habitat will build 88 single-family houses. If approved by the city council, construction will start in 2023.

The $300 million total overhaul of the three downtown/riverfront parks is well underway. Here’s some park construction trivia from Metropolitan Entertainment & Convention Authority. To date, 97,000 feet (18.3 miles) of electrical conduit has been laid underground in Gene Leahy Mall. Additionally, 250 boulders have been placed in the future sculpture garden site with another 33 boulders scheduled to be installed along the 13th & Farnam Plaza.

Lead Story in the Wall Street Journal – Berkshire Hathaway was in the news big time earlier this week when it was revealed that vice chairman Greg Abel will succeed Warren Buffet, when the 90-year-old CEO is no longer able to lead the nation’s sixth largest company. The Oracle of Omaha has led Berkshire for more than 50 years. The company earned nearly $246 billion in 2020. Omaha -based Union Pacific announced plans to open a new intermodal terminal in the heart of Southern California’s import distribution region. Located near the Ports of Los Angeles and Long Beach, the new terminal will open in the second quarter of 2021, providing customers expanded access to key markets. Valmont Industries, Inc. had reported net sales of $774.9 million in the first quarter of 2021, a 14.9 percent net increase led primarily by significantly higher sales in irrigation and utility support structures. The Omaha-based company is a leading global provider of engineered products and services for infrastructure development and irrigation equipment. Omaha-based Green Plains Inc. this week announced financial results for the first quarter of 2021. Revenues were $553.6 million for the first quarter of 2021 compared with $632.9 million for the same period last year. Silicon Prairie’s Piece of the Pie – Some of the world’s largest tech firms have major installations in the Omaha metro area. Google, Facebook, Amazon, PayPal, Yahoo, LinkedIn and others collectively employ thousands of workers and have invested many billions of dollars into the Omaha economy. The tech industry sector had a banner year in 2020. The seven largest tech companies grew in value by a combined $3.4 trillion last year. To give you an idea just how much money the tech giants are making, here is CNBC’s list of how much each company made per minute in the first quarter of this year: When you’re knocking down those kinds of numbers, every minute truly does count: Attention Businesses: We have an appetite for news! Because of our electronic-only format, we have plenty of room for more business briefs. Send your announcements and press releases to news@growomaha.com. Publishing decisions are at Grow Omaha’s sole discretion.