Not Just Benson – Burrito Envy will open a second location in a 2,017 sq. ft. space formerly occupied by Kolache Factory at 12321 West Maple Road. The original Burrito Envy is at 6113 Maple Street in Benson.

Growing Like a Weed – Dandelion Pop-Up, which is wildly popular for its outdoor Friday lunches at 13th & Howard Street is popping up elsewhere too. Dandelion will soon offer Sunday brunches in the Flat Iron building at 17th & St. Mary’s Avenue. The exact schedule will be announced soon. The Dandelion brunches at Flat Iron will feature rotating chefs, cocktails and music both indoors and on the patio.

Taproom Near TD Ameritrade Park – Just in time for the College World Series, Kros Strain Brewing of La Vista has opened the Kros Strain Draft Works, a taproom, at 1229 Millwork Avenue. Located in the historic Ashton Building in the emerging Millwork Commons district, the new taproom is a just a line drive north of the baseball stadium. Thirty Kros Strain beers are available on tap along with cider from Glacial Till Vineyard.

Restaurant Business on the Upswing – The Midlands Business Journal recently highlighted Good Lookin’, a breakfast-and-lunch spot which opened in February in Dundee. Owner Christian Brabec was quoted as saying there is an upward trend in the number of people who are frequenting restaurants.

“Overall, the restaurant and food scene in Omaha is really exciting right now, Brabec said. “There are a lot of local concepts opening…I really hope the community will support these new businesses.” 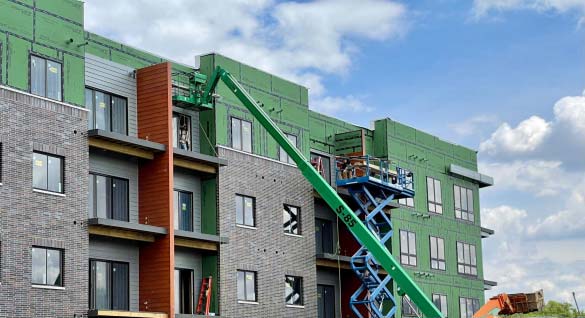 Photo courtesy of MCL Construction, which served as construction manager and general contractor for the Munroe-Meyer Institute.

When you drive around the metro area, you don’t have to go far before you notice a construction project to two (or a hundred). If you’re thinking there’s more construction than usual underway in Omaha, you’re right.

Even after factoring the pandemic-driven slowdown last spring and the fact that much of the commercial increase is driven by a massive data center project in Papillion, the growth rate is nonetheless impressive.

Several parts of the metro are experiencing particularly robust single-family housing construction activity including northwest Omaha (including parts of Bennington and Elkhorn), Papillion and Gretna.

Urban Omaha is seeing heavy mixed-use and multi-family development plus some major civic projects – the $300 million overhaul of the Riverfront Parks and the 82,000 sq. ft. Kiewit Luminarium science museum.

By shear size, the biggest projects underway are billion-dollar data centers for Facebook and Google along Highway 50 in Sarpy County as well as Amazon’s 2.1 million sq. ft. regional fulfillment center at Highways 50 & 370.

The historic Lincoln Highway has been designated as a National Scenic Byway. Built in 1913, the coast-to-coast highway starts in New York’s Times Square and meanders west to San Francisco including 450 miles in Nebraska. The preserved brick section in west Omaha (starting near 175th & West Dodge and stretching into Elkhorn) is the longest portion of the original highway surface still intact.

Omaha has been ranked as the number-four Top Market for First-Time Homebuyers according to SmartAsset.com. The three cities that ranked ahead of Omaha were Nashville; Boise, Idaho and Grand Rapids, Mich. Olathe, Kan. was 10th. Lincoln was 16th. Omaha ranked particularly high for its low foreclosure rates, low unemployment and home ownership rates among people younger than 45.

Construction has gone vertical and is progressing nicely on the first building in the $500 million Mercantile redevelopment project on the north part of the downtown ConAgra campus. Crews are now framing the second floor of a 375-unit apartment building that will also contain 42,000 sq. ft. of retail space on the northeast corner of 10th and Farnam Street.

The Omaha Airport Authority is kicking off a major construction project that will literally pave the way for future terminal expansion at Eppley Airport. The project will modernize the terminal entrance roadway and the south parking garage.

Roadway expansion will include a new entrance with stoplights and improved signage from Abbot Drive. Additional traffic lanes will add capacity and provide safe and efficient access. Landscaping and lighting improvements are also in the plans.

In the south parking garage, an express ramp will be added providing access to the new premier parking on level 3 as well as new signage, lighting and wider stalls.

Work on this $20.3 million project began on June 16th and should be completed by late 2022. Access to the terminal and south garage will be maintained during all phases of construction.

The building currently has two available office spaces of 4,968 sq. ft. and 6,179 sq. ft., the later of which has two drive-thru lanes with a canopy and perimeter offices with glass walls.

Black Hills Energy created a direct economic impact of $142 million to the Nebraska economy, according to the company’s 2020 community impact report. The Rapid City, S.D.-based company employs 440 people in Nebraska and has nearly 297,000 natural gas customers in 319 Nebraska communities.

The average cost of building a new single-family home in the United States has increased by +8 percent in the last year ($24,000) solely because of the rising cost of lumber, according to a newsletter published by McGregor Interests, Inc. of Omaha. Lumber mills shut down nationwide in 2020 for as long as four months, leading to a lumber shortage as homebuilding demand accelerated. Lumber imports have been impacted by a beetle plague ravaging Canadian forests.

Michelle Moore, Chief Global Mobility Officer at Omaha-based NEI Global Relocation, has been appointed to the Worldwide ERC Board of Directors for a three-year term. Worldwide ERC is the mobility industry’s premier trade organization.

QUESTION: Who Else Should Read This Newsletter?