Big Changes on L Street – The long-time Famous Dave’s restaurant on the southwest corner of 120th & L Street will close soon. After the building is demolished, plans call for the construction of a Rocket Carwash and a free-standing Sonic Drive-In on the site. Famous Dave’s has not announced if it will open a replacement restaurant. The only other Famous Dave’s in the metro is at Highway 75 and Cornhusker Road in Bellevue.

Seems Like Old Times – The legendary Dundee Dell at 5007 Underwood Avenue has reopened under new ownership. The remodeled restaurant is currently only open for dinner with a limited menu, but good news – they do have the famous fish and chips!

More Details on New Indian Restaurant – Saffron, the upscale Indian restaurant planned for Aksarben Village received its construction permit paving the way for interior buildout. The 5,000 sq. ft. restaurant is expected to open in October next to Herb Sainte. The full-service bar will be branded differently from the rest of the restaurant and will be known as the “Bombay Bar.”

Moving Across the Street – The former KFC northwest of 132nd & West Center Road will become a free-standing PepperJax restaurant, which will be relocating from a strip center on the east side of 132nd Street.

Sign of Things to Come – The permanent signage is in place for the future Primo’s Mexican Restaurant replacing the old Petrow’s near 60th & Center Street. The existing Primo’s is located at 930 5th Avenue in Council Bluffs.

Fast & Fresh All Alone – Hy-Vee is building one of its Fast & Fresh convenience stores at the entrance to the Coventry development (204th & George B. Lake Parkway). Construction is progressing rapidly with an opening projected for late this summer. 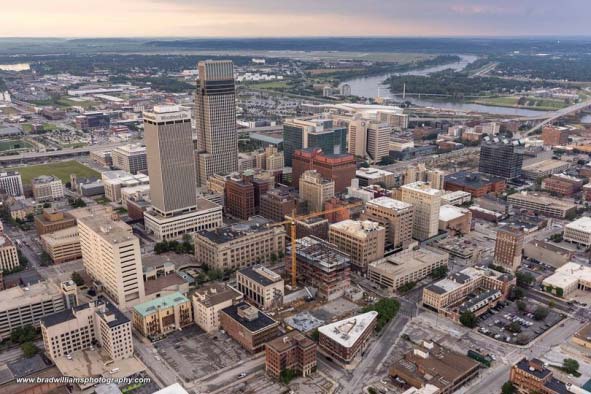 The area around the Omaha-Douglas Civic Center is filling in and feeling more “dense” as construction is progressing on the future Douglas County Juvenile Justice Center on the southwest corner of 17th & Harney Street. The construction project is visible below the yellow tower crane in the photograph above (photo credit: Brad Williams)

The $120 million, 10-story justice center is located on the former Metropolitan Utilities District headquarters campus. The project includes the renovation of the historic MUD main building. MUD relocated last year to an office building near 72nd Street and Interstate 680.

In addition to the office component for court operations, the center will include a 64-room juvenile detention center located on the south side of the square block along Howard Street. The center will be connected to the Douglas County Courthouse by a secure skywalk.

The project has generated controversy partly because of the overall cost but also become the new facility is substantially smaller than the existing one in terms of number of beds.

A 150,400 sq. ft. warehouse is planned for a 12.9-acre, triangular piece of land bordered by Storz Expressway, Abbott Drive and Lindbergh Drive immediately northwest of Eppley Airport. Architectural renderings show an attractive façade with the building comprised of precast concrete panels. Thirty dock doors would be installed on the building’s back side.

Non-stop flight destinations are coming back to Eppley Airport in a big way as the pandemic winds down. Airlines suspended 14 of Omaha’s nonstop destinations in 2020. All but four non-stop routes have now been restored.

The iconic Wolf Brothers Western Store near 72nd & Dodge Street is closing. The new owner plans to renovate the building for a yet-to-be-announced tenant.

Werner Enterprises, Inc., an Omaha-based Fortune 1000 company has signed a definitive agreement and closed on the acquisition of an 80 percent equity ownership stake in ECM Transport Group for a purchase price of $142.4 million and retains an exclusive option to buy the remaining 20 percent of ECM Transport Group after a period of five years. With 2020 revenues of $108 million, ECM consists of ECM Transport and Motor Carrier Services of Pennsylvania — elite regional truckload carriers that operate nearly 500 trucks and 2,000 trailers in their network of 8 terminals and 18 drop yard facilities.

TS Banking Group of Treynor, Iowa, has entered into an agreement with B&E Investments, Inc., to acquire State Bank of Arcadia in Arcadia, Wis., with banking assets of $210 million. The transaction is expected to close in the third quarter of 2021, subject to customary closing conditions, including the receipt of the requisite regulatory and shareholder approvals.

Upon the closing of the transaction, State Bank of Arcadia will merge into TS Banking Group’s Illinois-based First National Bank and Trust Company, with the resulting bank having approximately $400 million in total assets across five locations.

Outlook Business Solutions will hold a ribbon-cutting for its expanded facility on July 15th at 4125 South 72nd Street.

Since declining to a record low in April of last year, the Creighton University Mid-America Business Conditions Index, a leading economic indicator for the nine-state region stretching from Minnesota to Arkansas, moved above growth neutral for 13 of the last 14 months. The Business Conditions Index, which ranges between 0 and 100, climbed to a very strong 73.5 from May’s 72.3. Any score above 50 suggests growth, while scores below 50 suggest a shrinking economy.

Pass Along the Market Report!