Sandwich Swap – Jimmy John’s has moved from its previous location on the northwest corner of 168th & Harrison Stret to a newly constructed building on the southwest corner. The actual address is 16869 Audrey Street. The previous space will be renovated and taken over by Pickeman’s Gourmet Café, which will open this spring. Pickleman’s has 24 locations in several states including multiple stores in the Omaha metro.

Starbuck’s is now open for business at 86th & West Dodge Road in a newly constructed free-standing building with a drive-thru.

Possible change at One Pacific Place? The space currently occupied by 801 Grill at 10387 Pacific Street is being marketed as a “turnkey restaurant space for sublease.” 801 Grill is part of Iowa-based 801 Restaurant Group, which operates four restaurant brands in seven Midwestern Cities. The company’s prime steakhouse concept, 801 Chop House, has a location in downtown Omaha.

Construction has started and the foundation is in place for a Church’s Chicken restaurant building just east of the Wal-Mart superstore on the northwest corner of 168th & West Maple Road. The exact location is 168th & Spaulding Street. Church’s is based in Atlanta and has more than 1,700 locations.

The Olive Garden under construction at Shadow Lake Town Center in Papillion is slated to open February 21st. The Olive Garden is talking over a free-standing pad site building previously occupied by Old Chicago.

For the fifth year in a row, Villagio Pizzeria has been awarded “People’s Choice,” in the 11th Annual Omaha’s Largest Pizza Review, held recently at the Waiting Room and Reverb Lounge in Benson. The event is presented by Food & Spirits Magazine, with a portion of the proceeds helping provide scholarships for culinary students at the Institute for the Culinary Arts at Metro Community College, some of whom were on hand to help serve the pizza. Villagio Pizzeria is located in I-680 & Blair High Road.

An 80,133 sq ft. Floor & Décor store is under construction near Nebraska Furniture Mart along the Little Papillion Creek, but according to Nebraska Examiner, plans for fast-food restaurants along Dodge Street have been scrapped at least for now. 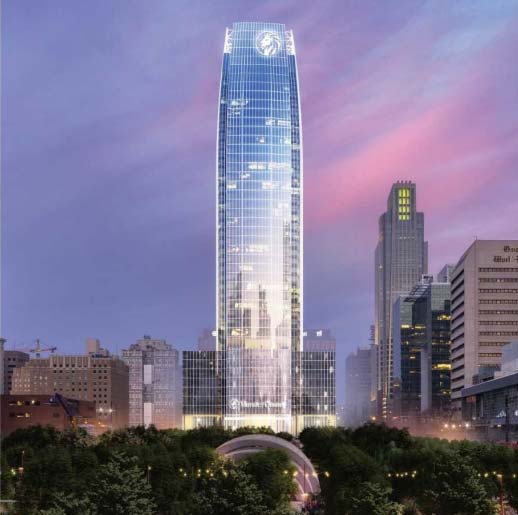 What a banner day! Omaha Mayor Jean Stothert and Mutual of Omaha CEO James Blackledge on Thursday announced two of the biggest development projects in city history – a skyline-changing office tower and a modern streetcar system.

A Fortune 300 insurance and financial services company, Mutual of Omaha will pursue the development of a new headquarters tower in downtown Omaha, on the current site of the W Dale Clark Library. The library will be relocated to 14th & Jones Street later this year.

Mutual is working closely with the City of Omaha and developer Lanoha Real Estate Co. on the headquarters plan.

“We are inspired by the energy in downtown Omaha and recognize the importance of a vibrant urban core for the city’s future. The development of a downtown headquarters tower provides a rare opportunity to create an inspiring workplace for our associates while contributing to the vitality of downtown Omaha,” Blackledge said.

A key element of the company’s decision to pursue a downtown headquarters is the city’s commitment to a modern streetcar line.

“A modern urban transportation system in the form of the planned streetcar line makes this project possible by providing convenient access to our planned headquarters tower and by allowing us to think creatively about many aspects of the project,” Blackledge said.

The headquarters plan envisions the redevelopment of Mutual’s current Midtown campus as well as property it owns east of Turner Park. Mutual developed Midtown Crossing at Turner Park and is heavily invested in the ongoing success and growth of Midtown Omaha, Blackledge said.

“These plans represent a win-win, as our proposed downtown headquarters tower will be a significant addition to the strength of our urban core while freeing attractive property in Midtown for redevelopment, with the connection of the modern streetcar line fueling both projects,” he said.

Mutual is working with international architecture firm HOK on a study to assess its space needs and develop a compelling vision of the future workplace. This study will be a vital link in determining the exact size of the proposed downtown skyscraper, as well as the building’s features and amenities.

“While we are confident the new headquarters we are envisioning will have a dramatic impact on the city’s skyline, there is still work to be done to determine the exact size and configuration of the project,” he said.

In addition to developer Lanoha Real Estate Co., Mutual is working with a design team that includes Kendall/Heaton Associates of Houston, Pickard Chilton of New Haven, Conn., and Omaha’s Alvine Engineering. The company is also collaborating with Mayor Jean Stothert, the Omaha City Council and various City of Omaha departments on the project.

Live Nation, the world’s leading live entertainment company will be the exclusive promoter at the new live music venue Steelhouse Omaha, which is currently under construction in the Capitol District at 12th & Dodge Street. The $104.1 million Steelhouse Omaha is scheduled to open in mid-2023. The venue will provide flexible space to accommodate audiences of 1500 to 3000.

The Iowa Welcome Center in Council Bluffs has moved to 509 23rd Avenue along the South Expressway a half-mile from Interstates 80 & 29. The welcome center was previously housed at the now-closed Western Historic Trails Center.

We have a progress report on the mixed-use development underway at 72nd & Grover Street. The name has been changed from Maverik Landing to MH Landing. The University of Nebraska at Omaha, which uses “Mavericks” as its nickname, requested the change, according to Dan Marak of MH Hospitality, the project developer.

The former Coco Key and Ramada Hotel have been mostly demolished now, once all the debris is cleared from the site, construction will be able to proceed on the nearly $90 million project. Marak has sold all sold all but his pad sites reserved for drive-thru businesses. Below is a update on the project’s lots:

Lot 5 will be home to a new corporate office building that will house MH Hospitality’s headquarters.

Lot 4 will be a Fairfield by Marriott hotel, a $12 Million dollar project. The site already has a dual-branded Home2Suites by Hilton and Tru by Hilton property, which opened last year.

Lot 3 will be an $8 million medical office building. The sale is scheduled to close March 1st.

Lot 2 – The developer has a Letter of Intent for a national user that has not yet been announced.

Lot 1 will become a retail strip center with a potential sports bar tenant that would be well known in the Omaha market.

Real Estate News from CoStar – While uncertainty is still the prevailing theme in the office sector, after two consecutive quarters of improved leasing activity a case can be made that the national office market is stabilizing and entering the early stages of recovery.

Office leasing activity remains slightly below pre-COVID-19 norms, but leasing volume in the fourth quarter of 2021 roughly matched the third quarter’s total. The steady leasing environment persisted despite the effects of the omicron variant, which upended return-to-office expectations for many office tenants.

Stronger leasing volume in the second half of 2021 helped contribute to positive net absorption, the net change in space occupied by office tenants less move-outs, and demand roughly matched new office supply added in the fourth quarter. As a result, the national office vacancy rate flattened out just above 12 percent.

Union Pacific Railroad will be the primary intermodal rail transportation provider in the western U.S. for Schneider effective January 2023. The partnership creates seamless service and reliability between the railroad and Schneider which provides the critical “first and last miles” of the supply chain.

The Scoular Foundation has donated more than $20,000 to assist with the relief and recovery programs tied to the catastrophic tornado that hit Kentucky in December.

Arbor Bank has promoted Chris Kortus to vice president, commercial banking. Kortus has been with the bank since 2014. He will be based in the bank’s Elkhorn and Lakeside offices.

Paul Maass, CEO of Scoular Co., has been appointed to the board of directors for the Federal Reserve Bank of Kansas City’s Omaha branch. He is one of seven board members of the Omaha branch. Besides Omaha, the Kansas City Fed has branch offices in Denver and Oklahoma City.