We got our Mexican restaurants mixed up! Last week, we erroneously stated that Romeo’s Mexican Food & Pizza was going into the former Tanners Bar & Grill space at 192nd & Q. It’s actually Julio’s that will be taking that space. Julio’s also plans to open inside the former Jack & Mary’s restaurant near 114th & Dodge. Plans call for both Julio’s locations to be open first half of this year.

Just Pop’d Popcorn opened back in November at 9839 South 96th Street in Papillion. The store operates on the ground floor of a new mixed-use building on the southeast corner of 96th & Portal Road.

Dollar General has opened a new store on the southeast corner of 16th & Storz Expressway in north Omaha.

Rexius Nutrition will soon open a Gretna location southwest of 168th & Highway 370 in the same strip center as Lansky’s Pizza.

After 54 years, Anthony’s Steakhouse at 7220 F Street plans to close its doors permanently at the end of February. The legendary South Omaha-style Italian steakhouse is famous for the statue of a giant steer on the roof, which is visible for Interstate 80.

Spikers Sports & Spirits, a popular place for sand volleyball and drinks, has closed at 20227 Husker Drive in Gretna. 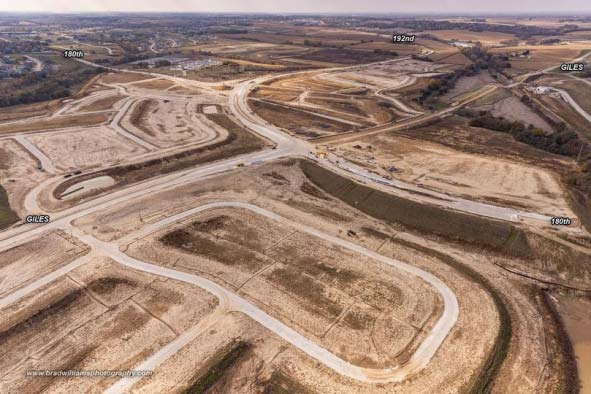 Major Development Projects Across the Metro

The January Grow Omaha Construction Update video, produced by Brad Williams, is now available on our website or by clicking HERE.

All of our construction videos are chock-full of video footage and information about local developments. But this month’s episode is particularly jam-packed with a total of 17 projects. For this week’s Big Story, we decided to highlight just some of the projects you’ll see in the video. Here goes…

The Mercantile is the Hines development on the northern portion of the ConAgra campus near Heartland of America Park. The first building’s brick exterior is mostly installed along 10th Street. But the project extends eastward all the way to 8th Street. The Mercantile will have hundreds of apartment units and dramatically changes the look 10th Street.

Kiewit Luminarium science museum is mostly enclosed and progressing toward its planned opening a little over a year from now. The $103 million building on Lewis & Clark Landing will be a major tourist attraction when it opens.

Downtown Boutique Hotels – The renovation of the historic Logan Building is nearly done. The 7-story building will become Nebraska’s first Hotel Indigo, a popular chain of boutique hotels typically located in urban areas. In a different part of downtown, Nebraska’s first Moxy by Marriott hotel is under development at 12th & Harney Street. The first floor is in place with upper-floor framing starting any time now. The 6-story building will sit on a very small lot that was once home to the Old Market Diner.

Construction has already started going vertical on the 42,000 sq. ft. Rhonda and Howard Hawks Pavilion, an architecturally striking addition to Joslyn Art Museum. The concrete elevator shaft is now in place. The addition will open in 2024. Joslyn is closing later this year and will stay closed for the duration of the construction project.

Two Apartment Projects – The Eastern half of an apartment building has topped-out northwest of 38th and Leavenworth Street. When completed, the building will have 172 units and 150 underground parking stalls. A few miles west, at 80th & Dodge Street, crews are working on The Clove apartments. The concrete structure that will comprise the ground-level parking is mostly in place. The Clove sits on the site of a former Village Inn restaurant and EconoLodge hotel. The 5-story building will have 175 units. The main entrance will be on the south side, facing Farnam Drive instead of Dodge Street.

Something big is coming to Gretna’s 370 corridor. The site has been graded and a construction trailer in place for a full-service Hy-Vee grocery store northeast of 192 & Highway 370. A Hy-Vee Fast & Fresh convenience store opened earlier this year on the site. Hy-Vee has not announced a start date for construction of the full-service store, but based on site-prep activity, it could happen at any time.

Finally, substantial development activity is underway at 180th & Giles Road. Two new bridges are being installed over a creek and the BNSF railroad track. One of the bridges is part of Giles while the other one is part of 180th Street. A new 180th & Giles intersection is already open. Impressive amounts of adjacent construction is underway, mostly residential, which you can see in the Brad Williams’ aerial photo above.

Developers are planning a mixed-use development along the west side of Saddlecreek Road between Pacific and Mayberry streets that will brighten up a tired-looking part of Midtown.

Plans call for a 6-story multi-family building that will have 195 market-rate apartment units with underground parking. The west side of the building would be lined with attached row houses. On the east side of the building, right along Saddlecreek, will be two free-standing buildings: a 3,140 sq. ft. credit union and a 2,500 sq. ft. restaurant. The project is one of many under development in the rapidly growing area around the University of Nebraska Medical Center.

A Nebraska state senator has proposed a bill that would provide $500,000 to study the feasibility of a high-speed commuter rail line between Omaha and Lincoln. Considered a legislative longshot, the study would include cost estimates, timelines, potential routes and economic impacts.

Take 5 Car Wash and Take 5 Oil Change are planning to build a new location in Papillion’s Shadow Lake Town Center on a vacant lot between Texas Roadhouse and Buffalo Wild Wings. Also at Shadow Lake, construction is underway on a Chase Bank Branch. A former Old Chicago restaurant building is being transitioned into an Olive Garden.

Omaha Mayor Jean Stothert recently said an announcement regarding downtown’s W. Dale Clark library site near 14th and Farnam will likely be made within the next six months, according to the Omaha World-Herald. The City plans to move the downtown library from it’s hulking, 1970’s-era current building to a soon-to-be-renovated historic building at 14th & Jones Street. Back-office and administrative functions would be moved to a former Shopko store near 84th & Frederick Street. The mayor has said the current library site is coveted by more than one real estate developer. Rumors have floated around over the past couple years about various companies interested in building a corporate office on the site.

The state of Arizona plans to invest $25.7 million in Creighton University’s College of Nursing’s Accelerated Bachelor of Science in Nursing program. The investment would guarantee at least 300 additional clinic-ready nurses are in the Arizona workforce by 2030. Based in Omaha, Creighton University operates a health sciences campus in Phoenix that can accommodate more than 900 students.

Real Estate News from CoStar – An annual study that tracks where Americans are moving found people flocking to states and cities with lower populations. The Medford-Ashland, Ore. region and Punta Gorda, Fla. led the nation in the percentage of inbound migration in 2021, according to United Van Lines’ “National Movers Study.” The study relies partially on the moving company’s tracking of the total number of shipments the company completed in a state or city and what percentage of those shipments was inbound versus outbound.

United Van Lines data showed New Jersey had four of the top 10 metropolitan areas with outbound migration last year, the fourth year in a row it led the list. Illinois, New York and California were also among the high-population states that saw the biggest outbound migration percentages.

Farmland values in the three states increased by double digits in the past six months. This followed more than a year of steady improvement in the real estate market.

Sapp Bros. has acquired Pelgas, a propane company based in Atlantic, Iowa. The company was founded in 1947 and provides propane to commercial and residential customers in an area between Council Bluffs and Des Moines, Iowa.

Mike McCarthy, founder of McCarthy Capital, an Omaha-based private equity firm, is one of three business leaders to be inducted into the Nebraska Chamber of Commerce Hall of Fame on February 3rd as part of the 2022 class.

ACCESSbank has appointed Thomas Corrigan as president and member of the board of directors. He has been with the bank since 2007 most recently as executive vice president and chief lending officer.

Arbor Bank has added Ron Nebbia and Mark Quandahl to its board of directors. A Certified Public Accountant, Nebbia is a consulting shareholder at Lutz. Quandahl is an attorney with Dvorak law Group and a former director of the Nebraska Department of Banking and Finance.