An Exclusive Cigar Bar – Capital Cigar Lounge, a private-membership cigar bar from Lincoln, plans to open an Omaha club in a to-be-constructed building at Heartwood Preserve southwest of 144th & West Dodge Road. The two-story, 16,000 sq. ft. building would include outdoor seating on both the ground and main levels. Capital Cigar Lounge will take the upper level. The project’s developer is seeking a prime steakhouse to occupy the ground floor. Opening is planned for 2023.

The Greek Islands restaurant at 3821 Center Street has made Yelp’s list of the top 100 U.S. restaurants for 2022. Yelp ranked restaurants according to the number of reviews, average rating score and other factors.

402 Beer & Spirits has opened at 13110 Birch Drive near 132nd & Maple. The store sells a large variety of craft and domestic beers, wine and liquor. The beers are stored in a large walk-in beer “cave” where the temperature is kept at 36 degrees.

Gunderson’s Jewelers plans to open a store at Heartwood Preserve in a to-be-constructed, 20,000 sq. ft., two-story building east of the Valmont Industries headquarters and south of Carson Group’s headquarters. When it opens, the new store will feature the largest Rolex showroom in the United States.

When going out to dinner with friends or family, you’ve probably asked the age-old question: “Where should we go?” Well, Omaha Food Lovers has created a new app that will helps you answer that question. Check it out HERE. 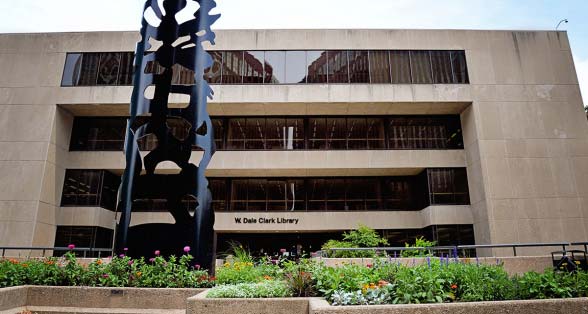 Last week we talked about the 45-story Mutual of Omaha skyscraper planned for the current W. Dale Clark library site downtown bordered by 14th, 15th, Farnam and Douglas streets. In order to start construction next January, many steps lie ahead this year.

The Omaha City Council cleared a major hurdle earlier this week by approving two leases that will make it possible to vacate and soon demolish the current library building.

The downtown branch’s public-facing services will move to a 30,000 sq. ft. leased space in a historic building on the southwest corner of 14th and Jones Street, only four blocks to the south. That 110-year-old building will be renovated both inside and out.

Administrative and distribution/circulation functions will move to an 87,000 sq. ft. former Shopko store space to be leased at 84th & Frederick Street.

In addition to the two leases, the City Council approved a $390,000 contract with Omaha-based Noddle Companies to manage and coordinate the library move.

Following the vote, Omaha Mayor Jean Stothert issued the following statement: “Thank you to the City Council members who supported the library lease agreements. Your vote is an important step that allows us to proceed on schedule with Mutual of Omaha’s plans to build its new corporate headquarters downtown.”

The new Jones Street location will essentially become a branch office for the downtown area as opposed to the headquarters library.

Late last week, city officials said they are in the process of developing a new central library at 72nd and Dodge Streets that would be constructed on the site of the current Do Space building.

Heritage Omaha, a local philanthropic group that has played a major role in countless Omaha projects, has raised money for the potential flagship library. That building, according to some estimates, could cost more than $100 million.

With the completion of another phase of construction at its Council Bluffs campus, Google’s investment in the city has hit $5 billion, according to the Council Bluffs Nonpareil.

The Google data center in Council Bluffs is one of the Menlo Park, Calif. company’s largest facilities in the world and has created jobs for more than 900 people in a variety of full-time and external supplier roles. Jobs include computer technicians, engineers, food services, maintenance and security roles.

The company opened its first Council Bluffs facility in 2009 along Veterans Memorial Highway and its second in 2013 on 957 acres of land along Bunge Avenue just north of the Bunge North America plant.

The Gene Leahy Mall opening has been delayed to July 1st, but construction continues to progress, even through the winter months. All three arches in the Arches Playground have been installed, sod has been laid, and the first art piece destined for the Sculpture Garden, “Walking Flower Times the Power of Five” by James Surls, has been announced! During some of the warmer days this winter, The RiverFront team has been able to start installing wood decking around The Pond and the overlook areas along Douglas Street have also started to take shape.

What about Heartland of America Park construction progress? One of the most exciting amenities has started to take shape. The Skate Ribbon and Skate Kiosk concrete slabs have been poured, and rebar has been placed for the Skate Ribbon. Along Conagra Lake, infrastructure work has continued on the bulkhead wall for the reshaped lake edge. The team continues to prep for work this spring.

Real Estate News from CoStar – Starbucks executives, while anticipating some store closings and relocations, expect the opening of more sites will lead to as many as 500 additional retail outlets across the United States for the coffee chain by the end of this year.

The Seattle-based company’s most recent U.S. earnings results were positive but dragged down by international sales, particularly in China, where COVID-19 restrictions drove declines in some areas. Overall, the company posted revenue of $8.1 billion for the quarter ended Jan. 2, buoyed by an 18 percent increase in North American comparable store sales, beating forecasts. International sales declined by 3 percent.

Union Pacific Railroad has again been named to Fortune magazine’s World’s Most Admired Companies list and is the highest ranked railroad in the Trucking, Transportation and Logistics category. The magazine’s annual list will be published in the February/March 2022 edition, available on newsstands February 7th.

Viterra Limited is acquiring most of the assets of rival of Omaha-based Gavilon from Japan’s Marubeni Corp. for $1.125 billion, according to DTN. Tokyo-based Maurbeni bought Gavilon in 2009. Gavilon’s offices are located downtown at 14th & Capitol Avenue.

Based in the Netherlands, Viterra is an agricultural commodity marketing company with operations in 37 countries, including more than 180 grain elevators in 14 countries. The company also owns more than 30 processing plants, including oil crushing, biodiesel facilities and mills. Viterra also owns 25 port terminals in nine countries.

Gavilon has a network of 120 grain elevators throughout the United States, as well as operations in Mexico, South America, Europe and Asia. Gavilon also has minority ownership in two port terminals in Oregon and Washington state. The company employs about 2,000 people and is the second-largest grain handler in North America based on storage capacity.

Union Pacific has appointed Beth Whited as executive vice president – sustainability and strategy. In her new role, Whited will help develop and implement Union Pacific’s strategic vision as it strives to become “the nation’s No. 1 supply chain logistics provider and oversee its sustainability initiatives, guiding the railroad’s efforts to reach net zero by 2050.” She will continue to lead the company’s human resources organization.

Shannon Barber has joined Lutz as a senior accountant in the audit department. She is responsible for performing audits, reviews, and compilations for clients with a focus on the government, manufacturing, employee benefit plans and software industries. Lutz is an Omaha-based business solutions firm.