More Cookies to Crumbl – We reported recently that Utah-based Crumbl Cookies is opening it’s first Nebraska location near 168th & Center. Well, that’s not the only one. A second location is under development in a small strip center adjacent to the Hy-Vee store near 156th & West Maple Road. Crumbl has 264 locations in 36 states.

Frank’s Pizzeria has opened a second location at 5413 South 72nd Street in Ralston. The original location is at 711 North 132nd Street in the Linden Market Shopping Plaza.

Saffron Urban Kitchen and the accompanying Bombay Bar are now officially open next to Herb Sainte in Aksarben Village. The restaurant’s Facebook page says: “Chef Diwesh has been cooking for a little over a decade. He specializes on Indian cuisine. The concept features a full Cocktail Bar…a wine tasting room/Chef’s table and a Whisky Room.”

Little King has officially closed on its purchase of an empty gas station building that had also once served as an Enterprise car-rental location at 8602 Dodge Street. Demolition of the existing building should start soon, making way for construction of the future Little King building.

Jaipur opened its second location this week in the former Kith & Kin restaurant space at 5018 Underwood Avenue. The original Jaipur is a long-time occupant of Rockbrook Village.

The ALDI store located near Dave & Buster’s northwest of 132nd and West Center Road has moved across the street to the southwest corner. It is now open for business in a former Fresh Thyme space in Baker’s Square. 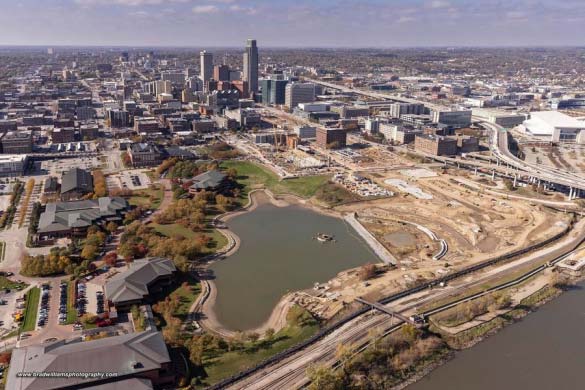 Year in Review: Overview of Growth & Development in 2021

When it comes to Omaha growth and development, 2021 will go down as a year to remember. Seemingly everywhere you go in the metro area, you see bulldozers, graders and cranes. There are so many projects under way that contractors are having a terribly difficult time finding enough trades people to do the work.

Part of the current construction boom is being fed by a strong, diverse economy. Another part of it is being fueled by population growth. The federal government released 2020 Census data this past summer, and the results were quite positive for the Omaha area.

The City of Omaha grew by 77,093, a whopping 19 percent growth rate. The population inside Omaha’s city limits is now 486,051. The city should pass the half-million mark within a couple more years. Sarpy County grew by 20 percent and Douglas County by 13 percent.

The overall eight-county metro area grew by 11.8 percent, which means there are about 102,000 more people in the Omaha area in 2020 than in 2010. Total metro population is 968,000. At the current pace of growth, the Omaha MSA should pass 1 million in people in 2023 or 2024. Metro Omaha’s 11.8 percent growth rate was faster than several metro areas in our region including Kansas City, Minneapolis, St. Louis, Chicago and Tulsa.

Several blockbuster development projects are underway in Omaha including: the $550 million Crossroads mixed-use development; The $300 million Riverfront parks overhaul; the $103 million Kiewit Luminarium; several sprawling warehouses for Amazon; massive data centers for Google and Facebook; two West Dodge Road corridor mixed-use developments in Heartwood Preserve and Avenue One; and major construction in North Downtown. Plans have also been announced for billions of dollars of construction at the University of Nebraska Medical Center.

In order to give you a feel for growth and development happenings, we are sharing development reports that appeared in NAI NP Dodge’s quarterly market reports from the 1st, 2nd and 3rd quarters of 2021:

Groundbreaking has taken place for the $27 million Astro Theatre at City Centre in La Vista, which will seat 2,500 people. The $103 million Kiewit Luminarium has topped out with the past piece of structural steel now installed. The 4-story, 180,000 sq. ft. Waterford Building is now open southeast of 192nd & West Dodge Road. Heavy construction activity is now underway on the Creighton University campus including a 5-story, 400-student residence hall at 23rd and Burt Street as well as the CL Werner Center for Health Sciences Education near Highway 75 and Cuming Street. FedEx is building a large distribution center on the site of a former garden nursery southeast of I-80 and Highway 370.

Facebook started yet another expansion at its Sarpy County data center campus. The latest expansion includes 1 million sq. ft. of building space, $400 million in additional capital investment and 100 more jobs. That’s a total of 3.6 million sq. ft. under roof worth $1.5 billion. Two more Amazon distribution centers (for a total of four) are under construction including a 142,000 sq. ft. building at 72nd & State and a 270,000 sq. ft. building at 24th & Highway 275 in Council Bluffs. Nashville, Tenn.-based MH Hospitality has acquired the struggling Ramada Hotel and Coco Key Water Resort at 72nd & Grover Street for $6.3 million and plans to build a $60 million, 18-acre, mixed-use center in its place. Cattlemen’s Heritage Beef Company plans to build a $325 million beef processing plant along Interstate 29 in far-north Mills County, Iowa.

While much demolition work remains, most of the Crossroads Mall has been removed. That will prepare the way for a $500 million redevelopment project slated to open in 2024. Milwaukee-based Fiserv will take advantage of tax incentives passed last year and keep a major employment presence in Nebraska. Fiserv acquired First Data Resources in 2019 for $22 billion. First Data had long been one of Omaha’s largest employers with 4,000 employees in Omaha. Several apartment projects were announced in the quarter including The Clove (178 units) at 78th & Dodge; LIV 178 at 178th & Pacific (96 units); the Flatiron project (180 units) at 19th & Howard; and a 134-unit project at 27th & Leavenworth.

The Charles Schwab Corporation announced the company is retaining exclusive naming rights to the home of the NCAA Division I Men’s College World Series through 2029, which it obtained from its October 2020 acquisition of Omaha-based TD Ameritrade.

Effective in 2022, the 24,000-seat baseball stadium and entertainment complex in downtown Omaha will be renamed, Charles Schwab Field Omaha. The firm also revealed new branding signage for the venue.

The agreement with the Metropolitan Entertainment & Convention Authority calls for interior and exterior signage featuring Charles Schwab branding and represents Schwab’s long-term commitment to the community, its growth and the economic development of Omaha.

“As many of you know, the building was sold, and all tenants were notified to vacate by January 15th. We’ve been working tirelessly to find a new, bigger, and better location to serve you. Buildouts can take a long time, so we will have a temporary location set up to provide your comics, unfortunately without the ability to make the coffee drinks, phosphates, and smoothies you love…Please stay tuned. We will announce the new locations as soon as we have them finalized…”

The grant is the second workforce development grant received from Iowa West Foundation. The funds will go towards continuing to produce and develop programs to address the following local workforce challenges.

Real Estate News from CoStar – The long-anticipated return to the office will accelerate in the coming year, according to a CoStar analysis, as companies begin making real estate decisions and eventually begin calling people back from remote work.

Nearly two years into the health crisis, office owners have seen sluggish demand because of several factors, including concerns about new variants of COVID-19. The omicron variant in particular is causing uncertainty in business planning in December, but the pandemic has shown that the picture can change six months into the future.

The rate of return to the office was less than 37% of pre-pandemic levels as of November, according to Kastle Systems, though CoStar analysts estimate that figure will reach 60% by the end of 2022. That’s the equivalent of three days in the office per worker each week, but it’s enough to slow demand losses for landlords.

Workers may not embrace a large reduction in their office space as a trade-off for flexibility as polls indicate employees strongly favor having assigned seating. Personal workstations make up one-third to half the space in a typical lease, and many people on hybrid schedules prefer to be in the office midweek.

Many firms planning hybrid schedules say they will have all employees in the office on the same days of the week to maximize collaboration, teamwork and other benefits of in-person work.

Kellogg’s 1,400 unionized workers have approved a five-year contract, bringing an end to a long-running strike by members of the Bakery, Confectionery, Tobacco Workers and Grain Millers International Union. Kellogg has a plant near 96th & F Street in Omaha, which employees approximately 450 union members. Plants in three other states were also affected by the strike.

Miller, currently assistant vice president-Corporate Finance and assistant treasurer, has been with Union Pacific for 28 years. He has held numerous Finance roles, including in Budgeting; Business Development and Planning; Corporate Audit; Cost and Profit Management; and Investor Relations. He will report to executive vice president and Chief Financial Officer Jennifer Hamann.

Miller will succeed Grosz, who is retiring March 1st after 40 years at Union Pacific. Grosz served as assistant vice president-Corporate Finance and assistant treasurer for nearly 20 years before being promoted to vice president and treasurer in April 2019. He previously held roles in Corporate Audit; Investor Relations; and Planning and Analysis.

The U.S. Department of Veterans Affairs has appointed Dr. Eileen Kingston as director of the Omaha-based VA Nebraska-Western Iowa Health Care System effective December 19th. She has been with the VA for more than 24 years.