Dynamite Woodfire Grill plans to open as part of the new Farnam Hotel on May 13th in the Landmark Building at 1299 Farnam Street. Dynamite features a massive, natural wood-fired oven/grill and will serve seafood, steaks and many other entrees. The restaurant’s private dining room features a large sculpture made out of charred timber joists from the 2016 M’s Pub fire.

After being closed for the pandemic, Nebraska’s only Bravo! Italian Kitchen location plans to reopen May 20th in Omaha’s Village Pointe Shopping Center. Bravo! has 27 locations in 14 states.

A Blackstone restaurant is expanding to Millard. “Cheeseburgers – A Take-Out Joint” at 4007 Farnam Street will hold a grand opening Saturday, May 14th for its second location at 6610 South 168th Street.

IkaSan Ramen officially opened this week in Shadow Lake Towne Center in Papillion. The sushi-and-ramen restaurant has existing locations in Benson and the Old Market.

A cookie retailer from Salt Lake City is preparing to open a location next to Kendra Scott in Village Pointe Shopping Center. It’s called Goodly Cookies and is described as “a late-night bakery delivering warm, delicious, freshly baked cookies to your neighborhood.” Goodly Coolies were recently named as best gourmet cookie in Utah. The Omaha location will be the first one outside of Utah.

Retail Development in Gretna – Grading and site preparation are well underway on a retail development at Highway 6 and Bryan Street in Gretna. Construction will soon go vertical on a 93,000 sq. ft. Fareway Meat & Grocery store as well as a Casey’s General Store. Plans call for an additional retail building and a small restaurant building with a drive-through lane.

Fortunately for Pasta Amore fans, the new ownership has pledged to honor established traditions including pasta made “old school” on pasta machines imported from Italy. Updates include the making of all pasta, bread, ricotta and mozzarella in-house and eventually returning to lunch service. In the coming weeks, the new owners anticipate opening for Happy Hour, Monday through Saturday 3:00 to 5:30 p.m. 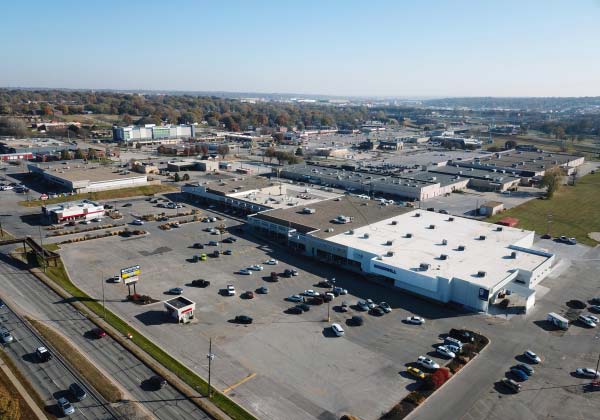 Grow Omaha co-founder and NAI NP Dodge broker Trenton Magid represented the seller, Schumacher Enterprises, LLC, in the sale as well as the acquisition when the company originally acquired the property in 2014 from the namesake family that operated Canfield Sporting Goods in the center for many years.

The northeastern corner parcel of Canfield Plaza – at 8417 West Center Road – was purchased by R.S. Holdings I, LLC. The building’s corner space (once occupied by Akins Natural Foods) will be redeveloped into a Mega Saver convenience store and gas station. Westlake Ace Hardware, Little Caesars Pizza and Cleaning Mart will remain.

Project Viking – Grading and site preparation are underway on “Project Viking,” a 142,000 sq. ft., last-mile warehouse for Amazon on a 25-acre site southwest of 72nd & State Street in north-central Omaha. The facility will include a covered loading zone plus a delivery van staging area. More than 800 parking stalls will be on site.

This is one of several Amazon projects underway in the Omaha metro. The online retailer is building a 2.1 million sq. ft. regional distribution center at Highways 50 & 370 in Papillion as well as another last-mile warehouse at 132nd & Cornhusker. It appears as if Amanzon might also be planning a 270,000 sq. ft. building at 24th & Highway 275 in Council Bluffs.

Nebraska’s population grew at a healthy 7.4 percent between 2010 and 2020, according to the U.S. Census Bureau, which earlier this week released population numbers for all 50 states.

The census bureau has not yet released official population counts for cities, counties and metro areas.

Groundbreaking was held last week in Council Bluffs for the First Avenue Trail that follows an old Chicago & Northwestern Railroad route. When finished, the 1.8-mile trail will run between 16th and 35th streets. Seven “plazas” will be constructed along the trail to provide seating and bicycle racks.

A ribbon cutting ceremony took place earlier this week for the Nebraska Department of Economic Development’s satellite office at 30th & Fort Street. The office is part of an initiative by local and state leaders to recruit businesses and create high-wage jobs in north Omaha. The new office is managed by Trevon Brooks.

ACI Worldwide Corp. will move its headquarters office from Naples, Fla.to the Miami area by the end of this year. The company has a large executive operations center near 204th & Q Street in Omaha. The global digital payments firm received a $360,000 economic incentive from Miami-Dade County. The deal brings 182 jobs with an average salary of $180,000 per year to the Miami suburb of Coral Gables.

ACI did consider Omaha for the headquarters location before settling on Miami. The company was founded here in 1975. ACI, which has offices in the United States, Brazil, Colombia and Canada, earned $1.3 billion in revenue in 2020 and employs almost 4,000 people.

Tenaska has announced that its founder and former NU Regent Howard Hawks is a 2021 inductee into the Nebraska Business Hall of Fame, administered by the Nebraska Chamber of Commerce.

After more than 18 years at the Metropolitan Area Planning Agency (MAPA), executive director Greg Youell is leaving in July to accept a position with Spirit Catholic Radio Network. Youell has been employed by MAPA since 2002 and has served as Executive Director since 2012. The MAPA Board of Directors will launch a search for Youell’s successor.

The Future of Retail Might Be Boutiques – The media continually talk about the success of Amazon and the death of retail, but they are wrong, according to Ashley Alderson, CEO of The Boutique Hub. Independent retailers are on the rise. Boutique retailers will play a big role in saving bricks-and-mortar retail in Omaha and other markets.

Alderson says one of the biggest reasons why boutiques are succeeding where many traditional retailers are failing is because they are so experiential.

“Boutiques fill a need Amazon doesn’t. Amazon is functional and useful when we know what we want. But there’s a difference between buying and shopping, and Amazon does not address the shopping experience.” Boutiques also create a more personal feeling for customers.

Most retailers will pass on the higher costs to consumers, who might not even notice the difference because of the savvy methods deployed by these companies. The pandemic has also given consumer giants more pricing power because consumers have put their trust in big brands and have a little more cash in their pockets.