The Cumbia Diner is planning to open this fall in the former Himalayan Java space at 329 South 16th Street downtown. Located next to Mercury bar and lounge, Cumbia will specialize in South American street foods such as ceviche and empanadas.

Ribbon cutting will take place October 27th for Café Diem 96 at 9839 South 96th Street in Papillion. The breakfast-and-lunch restaurant is located on the ground-level of the new Lux 96 building.

Hy-Vee has opened a stand-alone “Fast & Fresh Express” gas station and convenience store at the main entrance to the Coventry development at 204th & George B. Lake Parkway.

Cost Cutters plans to move from the 72nd and Pacific area to 8012 Dodge Street later this fall.

The Swimtastic Swim School plans to open in October in a newly constructed building at 9810 Giles Road in La Vista.

The Sarpy County Chamber of Commerce will hold a ribbon cutting October 5th for the new Rexius Nutrition store at 4005 Twin Creek Drive in Bellevue.

And here’s a little sad news – The “ultimate party superstore” Nobbies will close by the end of the year. The retailer has been in business for more than 33 years at Bel Air plaza near 120th & West Center Road. Owners Gordon and Joy Watanabe plan to retire. Nobbies’ going-out-of-business sale is being called a “retirement party” and will last through October. 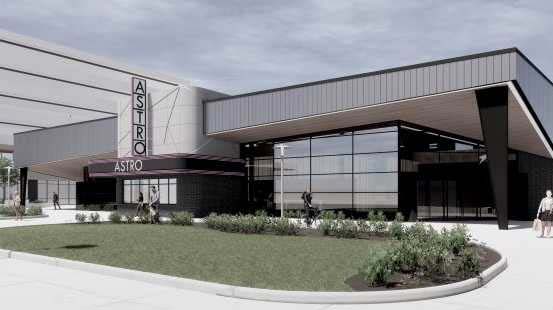 Omaha’s music scene has received national attention in recent years but much of that centered on “Omaha Sound” indie rock, which dwells in bars, clubs and small venues. Since 2003, CHI Health Center Omaha’s 19,000-seat arena has hosted some of the best-known, major concert touring acts.

While entertainment in the metro has long been more than respectable, Omaha is about to enter a new league with two mid-sized music venues now under development.

As we have reported before, construction is well underway on the $103 million Steelhouse Omaha. Much of the structural steel is now in place for the 3,000-capacity venue, rising on a former surface parking lot bounded by Capitol Avenue and 11th, 12th and Dodge streets.

Steelhouse will be operated by Omaha Performing Arts and will open in 2023. It is designed to attract performers that would be too big for the Orpheum Theatre or Holland Performing Arts Center but too small for CHI Health Center Omaha.

But now Steelhouse is getting some company in the medium-sized music venue market. The City of La Vista broke ground on the $23.6 million Astro Theatre this week. When it’s completed in January of 2023, the 52,000 sq. ft. theatre will seat 2,500 and will be connected to an outdoor grass amphitheater that will accommodate up to 5,000.

The Astro will be part of La Vista’s City Centre developed by Omaha-based City Ventures. City Centre is located along the east side of 84th Street between Harrison Street and Giles Road. Omaha’s 1% Productions and Kansas-based Mammoth are also involved in the theatre project.

Both Steelhouse Omaha and the Astro Theatre are designed to be flexible, accommodating various performers and different seating arrangements.

The former city hall property at 204 Mission avenue in Olde Town Bellevue will be redeveloped. A local developer plans to build a mixed-use building with 200 apartment units and 18,000 sq. ft. of retail space. The 4-story building will cost $40 million with construction beginning soon.

The Mansions at Granite Falls will hold a ribbon cutting October 19th at 10951 Wittmus Drive in Papillion. The 266-unit apartment complex sits on 20 acres in the Granite Falls subdivision. Seven of the apartment buildings are designed to look like “mansions.”

A Transit Oriented Development is planned for an empty lot on the southeast corner of 71st & Douglas Street. That’s immediately east of the 72nd & Dodge Street retail strip that is home to Chipotle and Noodles & Company. Plans call for four 4-story townhomes, each with a rooftop deck.

The streel frame is now in place for a future Veridian Credit Union branch office building near 75th & Dodge Street.

Arch Icon of Omaha plans to develop the 1120 Lofts, multi-family housing project on a vacant lot on the southeast corner of 20th & Paul Street. That’s just east of Kellom Elementary School on the near north side. The $6.6 million, 3-story building will have 30 rental units. Six of the units will be market rate, the remainder affordable.

Real Estate News from CoStar – For the first time since the onset of the pandemic, the amount of available office sublet space across the United States has fallen quarter over quarter. Through late September, roughly 205 million square feet of office space was being advertised as sublet availability, down from more than 207 million square feet at the end of the second quarter.

But while this is undeniably a positive sign for the office sector, it isn’t time for office owners to celebrate just yet. The amount of sublet space on the market remains near record levels and remains far above the pre-COVID average and the Great Recession-era peak, according to CoStar data.

32 Nebraska companies made the 2021 Inc. 5,000 list of fastest-growing private companies in the United States. The highest-ranking Nebraska firm was Omaha’s Viking Industrial Painting at #174. The Omaha metro area has 23 companies on the list. Lincoln has seven. Norfolk and Fremont have one each.

First State Bank & Trust of Fremont plans to acquire Two Rivers Bank of Blair and Arlington, Neb. The transaction is slated to close before the end of this year.

Omaha-based Scoular has purchased a grain handling and processing facility near Goodland, Kan. to deliver speed and space to area farmers. The facility, located 5 miles west of Goodland in northwestern Kansas, is currently operating. It has a capacity of more than 5.5 million bushels and is capable of loading and unloading trucks, as well as railcars.

Nebraska’s unemployment rate was only 2.2 percent in August. Not only was that the lowest in the nation, it was the lowest ever recorded in Nebraska history. July’s rate was 2.3 percent.

Omaha has lost one of its most prominent civic and business leaders. The billionaire philanthropist Walter Scott Jr. died this past weekend at the age of 90. Scott spent his entire corporate career at Omaha-based Peter Kiewit Sons’ Inc., a Fortune 500 construction company. He succeeded Peter Kiewit as CEO in 1979 and served in that role for nearly 20 years. Kiewit was a legendary leader, but Scott found a way to “fill his shoes,” both as an executive and as a pillar of the community.

Scott co-founded Heritage Services and led the philanthropic organization for more than 30 years. His leadership paved the way for more than $1 billion in major civic investments in the Omaha area. Scott was involved in virtually all of Omaha’s blockbuster projects over the years such as CHI Health Center, the Holland Center and TD Ameritrade Park. His charitable giving is visibly evident at the Henry Doorly Zoo and several local universities.

ACCESSbank has promoted Greg Hanson to vice president of the merchant processing division.

Baird Holm Partner Jennifer D. Tricker, has been selected as a member of the 2021-22 USLAW NETWORK Board of Directors Executive Committee.

Mutual of Omaha has promoted Sara English to senior associate general counsel. English joined Mutual in 2016 as an assistant general counsel. Before that, she was an attorney with Kutak Rock LLP. She holds a bachelor’s degree from Simpson College and a law degree from the University of Iowa College of Law.

Jessica Chapman, a travel center cashier in Junction City, Kansas employed by Omaha-based Sapp Bros., has been named the 2021 Harriet Tubman Award winner by Truckers Against Trafficking for helping a woman who had been sexually exploited. The Harriet Tubman Award presented by Protective Insurance, which carries with it a $2500 check, is named in honor of famed abolitionist Harriet Tubman.