Addy’s Sports Bar & Grill plans to open a new location in a to-be-constructed building next year on long-vacant lot at 5620 South 144th Street in the Stonybrook area. That’s just north of an existing Douglas County Treasurer’s office. Groundbreaking in planned for late spring. Addy’s has four existing locations. The new building would replace the current location at 141st & S Street.

Chippy’s British Market & Bakery has been a smash hit since opening last spring at 2718 S 123rd Court in Westwood Plaza. Chippy’s has leased the two empty bays on either side of the store. One is serving as a warehouse, while the other one will be a British restaurant opening next year. Owner Glenn Greet is planning to open an online store plus bricks-and-mortar locations in several nearby cities.

OnlyInYourState.com featured Sgt. Peffers, which has locations on Saddle Creek Road and in old Millard. Here’s a quote from the article: “There’s a Beatles-Themed Restaurant In Nebraska And It’s Everything You Could Hope For. There’s no doubt that The Beatles’ influence can be felt far and wide, from music to culture to fashion…and even food. This Omaha restaurant serves delicious Italian cuisine with a Fab Four twist.” Sgt. Peffers was founded in 1988.

Tropical has replaced TCBY at 5170 South 72nd Street in Ralston. The business sells ice cream and coffee. The location is south of the Ralston Arena. 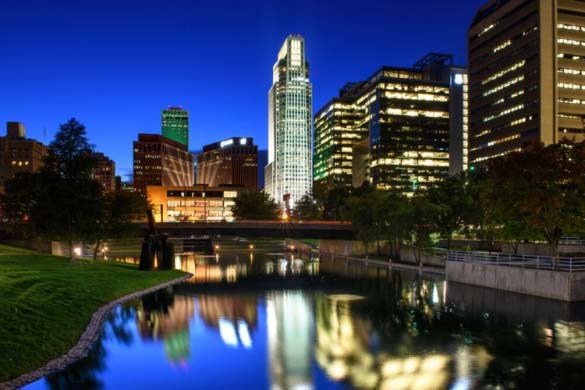 A Region That Exceeds Expectations

Last week’s Big Story discussed the Greater Omaha Economic Development Partnership’s corporate recruitment, retention and expansion efforts. This week, we thought it would interesting to share some of the information the economic development partnership uses when selling Omaha to company decision makers…

Economic Growth – Since 2007, Omaha has added 38,541 new jobs. The metropolitan area produces more than $51 billion in goods and services each year. Omaha’s finance/insurance sector grew 21.7 percent compared to 2.3 percent nationally. Our IT industry is booming with an 18.3 percent increase over the past five years.

Industry – Omaha entrepreneurs earn an income that is 57 percent higher than the national average. The metro has four Fortune 500 company headquarters and eight Fortune 1000 companies.

Talent – The metro workforce totals 495,000. Approximately 38 percent of adults hold a bachelor’s degree compared to 34 percent nationally. The average Omaha worker produces $62,154 worth of goods and services compared to $60,075 nationally.

Business Climate – Cost of doing business in Omaha is 12 percent better than the national average. Omaha’s commercial electricity costs are 20.5 percent below average.

Development is coming soon to the Werner Park area in Papillion. BHI Development, Inc. is working on “Generations,” a 60-acre, mixed-use project that would fill in the vacant land between Highway 370 and the baseball stadium. Plans call for 400 apartments, office space, condos, hotels and two parking garages. Space is now being marketed for sale, lease and build-to-suit.

Plans call for the Aksarben Suites by Wyndham at 7270 Cedar Street to be repurposed into a 181-unit apartment building. The project will have 169 studio apartments and 12 two-bedroom units. The 6-story, 152,000 sq. ft. building has previously carried the Embassy Suites and DoubleTree flags. The building was known as the Granada Royale Hometel when it first opened several decades ago.

Insurify has included Omaha on its list of the 20 safest cities for pedestrians, coming in at number 16. The number of Omaha drivers cited for failing to yield is 70 percent lower than the national average. Philadelphia ranked first. The only other cities from this region to make the list were Chicago and St. Louis.

Developers are planning a 4-story, mixed-use building at 4907 Underwood Avenue in downtown Dundee. The building will have street-level retail space with apartments on the upper floors. One existing residential building will be razed to make way for the new building.

A former gas station has been demolished near 107th & Pacific Street, which clears the way for a new entrance into the Regency Landing development. Crews are renovating an existing building on the site, which will include a third location of Early Bird restaurant plus Blue Sky Patio and Pickleball. Some of that building’s existing tenants will remain. Plans call for additional buildings to be constructed in the development.

Metro Omaha Builders Association will host its annual Fall Parade of Homes October 16-17 and October 23-24. This free annual event allows the public to tour showcase homes by various builders throughout the metro area.

Novozymes is planning to invest more than $316 million in a new manufacturing plant on the biorefinery campus in Blair. The Danish company, which has an existing operation in Blair, produces biotech solutions for the food and beverage industry. Construction is expected to begin in 2022 and be complete by 2023.

Would you like to own a mall? One Pacific Place, the outdoor shopping mall at 103rd & Pacific, is listed for sale. According to an offering memorandum produced by real estate company JLL, the 91,000 sq. ft. property is 93.4 percent occupied. Five leases totaling 12,000 sq. ft. have been signed so far in 2021. One Pacific Place was built in 1989 and sits on 10 acres. Trader Joe’s is the anchor tenant.

Consumer prices rose more than expected in September, driven primarily by higher energy prices, according to CoStar. The Labor Department reported Wednesday that prices over the past year have increased 5.4 percent and 0.4 percent from August to September. Economists had forecast 5.3 percent and a 0.3 month-to-month increase. Removing volatile energy and food prices, so-called core inflation was 4 percent over the past 12 months, which fell in line with estimates.

Fuel prices are up considerably during the year after having been down considerably last year as the pandemic suppressed demand. Gasoline, for example, is 42.1 percent higher than last year. Used car prices have been another inflation contributor. Those fell 0.7 percent for the month but still are 24.4 percent higher than last year, chiefly because new car supply is limited by a shortage of computer chips.

Mutual of Omaha has appointed Mark Klyman as senior associate general counsel at Mutual of Omaha. Before joining Mutual, Klyman was a senior investment counsel at CSG Investments, Inc. Before that, he was a shareholder at Vedder Price P.C., a senior compliance counsel at Harland Financial Solutions, vice president and general counsel at United Financial of Illinois, Inc. and a partner at Mayer Brown LLP. Klyman earned a bachelor’s degree from the University of Michigan and a law degree from the Harvard University.

Fred Hunzeker retired as CEO of Omaha-based Tenaska Marketing Group on October 1st. Hunzeker provided oversight to Tenaska’s energy marketing companies. He will remain an active member of Tenaska’s Board of Stakeholders.

Child Saving Institute has chosen Jaymes Sime as president & CEO and Lori Bechtold as Chief Development Officer. The organization focuses on the prevention, intervention and healing of child abuse, neglect and trauma.

Carson Group, an Omaha company that works with financial advisers across the country, has chosen Samantha Allen as vice president of digital marketing.