The Reincarnated Piccolo Pete’s is getting closer to opening its future location at 1st & Washington Street in Papillion. The owner, grandson of Piccolo’s founder, has taken possession of the building and installed an indoor replica of Piccolo’s famous neon sign. Piccolo’s operated near 20th & Martha from 1934 to 2015. The new Piccolo’s will be much smaller than the original.

The Cumbia Diner has opened at 329 South 16th Street in the former Himalayan Java space in The Limelight building. The restaurant sells South American street food.

They are not going anywhere! – Rathskeller Bier Haus felt the need to reassure patrons this week that it is staying open inside its historic building at 4524 Farnam Street. A Couple of neighboring buildings have been demolished in order to make way for University of Nebraska Medical Center. Fortunately for beer lovers, Rathskeller is not one of them. 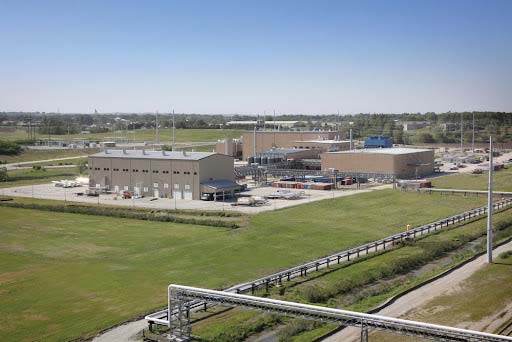 Novozymes is a Denmark-based company that already has a large industrial plant on Blair’s sprawling bio campus (pictured above). This $316 million investment will create a state-of-the-art production line and could create 50 additional jobs.

Overall, the partnership landed 11 total projects in the third quarter, totaling $403 million in capital investment and 1,200 new or retained jobs

Year to date, the partnership has landed $1.3 billion worth of capital investment, which is more than three times the 2021 annual goal of $400 million. The payroll associated with all these new investments totals $51.3 million.

Heartwood Preserve has closed on the sale of 14 acres to Broadmoor Development Company. That means the 500-acre, mixed-use development on the old Boys Town west farm, has surpassed the 70 percent sales mark for available property either under contract or sold, according to Applied Underwrites, which is developing the billion-dollar-plus district. Among the largest urban projects of its type under construction in the United States, Heartwood Preserve also features eight miles of trails and 80 acres of green space.

LinkedIn has moved into its newly constructed 200,000 sq. ft. office complex in the Sterling Ridge development southeast of 132nd & Pacific Street. According to the Omaha World-Herald, the company’s Omaha workforce has grown from 600 two years ago to 1,000 today, and could grow to 1,200 within a year. Omaha is now home to LinkedIn’s fourth-largest employment base in North America. The two buildings are five stories each and feature many of the employee perks common in Silicon Valley office buildings.

For the 12th straight month, the Creighton University Rural Mainstreet Index remained above growth neutral, according to the monthly survey of bank CEOs in rural areas of a 10-state region dependent on agriculture and/or energy. The region’s overall reading for November rose to 67.7 from October’s 66.1. The index ranges between 0 and 100 with a reading of 50.0 representing growth neutral.

Vala’s Pumpkin Patch is planning something new this year, a “Thanksgiving Market.” The two-day pop-up store will open in Vala’s exit barn November 23rd and 24th. Hours are 8 a.m. to 6 p.m. The Thanksgiving Market will sell holiday food items and treats.

The new supercomputer at the University of Nebraska Medical Center — considered the Ferrari of computing by some — enables UNMC researchers to rapidly and efficiently process huge amounts of data. Reportedly the fastest computer in the state that also is HIPAA compliant, the DGX A100 supercomputer is part of the Center for Intelligent Health Care, a University of Nebraska Board of Regents-approved Center of Excellence housed at UNMC.

The center, approved in 2020, works across the NU system to unite clinicians, clinical informaticists, data scientists and computer scientists to make health care more efficient, effective and safer for patients.

Demolition has started on the former Commercial Federal bank building on the southwest corner of Saddle Creek Road and Dodge Street. The mid-century design had been a landmark in the midtown area with its tall clock tower.

The University of Nebraska Medical Center’s outdoor ice skating rink will be open Nov. 27 through Jan. 30. The outdoor rink, which is open to the public, is located just east of 42nd Street, midway between Emile Street and Dewey Avenue, on the north side of the Michael F. Sorrell Center for Health Science Education. Admission for the public is $7, which includes skates (cash or credit card only — no checks or debit cards).

Real Estate News from CoStar – Pharmacy giant CVS Health plans to close 900 stores, or roughly 10% of its fleet, as it says it looks to adapt to consumers increasingly ordering medicines online.

The Woonsocket, Rhode Island-based company said Thursday it will be shutting about 300 retail sites a year in the next three years. The closings will kick off next year; the company hasn’t identified the locations yet. In its statement, CVS said it “has been evaluating changes in population, consumer-buying patterns and future health needs to ensure it has the right kinds of stores in the right locations for consumers and for the business.”

ACI Worldwide, a global provider of payment software with a major office in Omaha, launched its proprietary Network Intelligence Technology as an integral part of ACI Fraud Management. The new technology enables banks, processors, acquirers, and networks to augment fraud prevention strategies by allowing them to securely share industry-wide fraud signals by feeding their machine learning models and leveraging their machine learning technology more effectively. It offers industry players a new, hybrid approach towards fraud prevention, combining the strength of custom, proprietary signals and complementing them with signals exchanged within the consortium of industry participants.

Union Pacific Railroad has been named a 2021 Gold Medallion recipient by the HIRE Vets Medallion Program, a U.S. Department of Labor initiative that supports the hiring and retention of U.S. military veterans. The award honors Union Pacific’s “exceptional achievement” in recruiting, hiring, and recognizing the value that veterans bring to the workplace.

The Omaha Veterans Administration Ambulatory Care Center won the 2021 Best Healthcare Project from Engineering News-Record for the Midwest, according to Leo A Daly, which worked on the project.

Video Tour of a Cool Omaha Office – Sojern is a San Francisco-based company with almost half of its employees located in Omaha. The company recently produced a behind-the-scenes video tour of its Omaha office at 18135 Burke Street, 3rd Floor. You can see it HERE.

The University of Nebraska at Omaha has named Adrian Dowell as athletic director. Dowell, 35, has served as an athletic administrator at Creighton University for the past seven years.

Northwest Bank has appointed Aaron Gilson as commercial banker and vice president. Prior to joining Northwest Bank, he was with First Westroads Bank. He holds an MBA degree from Bellevue University and a BS degree in finance from the University of Nebraska-Lincoln.