Upscale Indian Cuisine – Saffron, a high-end, locally owned Indian Restaurant is planning to open in September in Aksarben Village. It will occupy the 4,500 sq. ft. corner space recently vacated by Lotus House of Yoga. That’s next door to Herbe Sainte and across the street from Lululemon. Saffron will provide a full menu of gourmet Indian cuisine and a premium cocktail bar.

Free Cupcake for Grow Omaha Fans! – CupCake Omaha opens in the Capitol District at 1026 Capitol Avenue May 29th. Anyone who mentions “Grow Omaha” will receive a free cupcake.

All-Beef Frankfurter on a Poppy Seed Bun – Chicago Dog 42 is a quick-serve restaurant planning to open in the Oakview Mall food court in July.

Council Bluffs Taco Run – DeLeon’s plans to open a quick-serve Mexican restaurant at 1201 East Pierce Street in Council Bluffs in a small building once occupied by Max I. Walker.

Not So Fast – Bravo! Italian Kitchen at Village Pointe had been planning to open May 20th but is now targeting the month of June.

“Pre-Loved Luxury Handbags” – Status has opened in the main level of the HDR headquarters building across from the Inner Rail Food Hall at Aksarben Village. The luxury store sells lightly used, high-end handbags and accessories.

Did You Miss Last Week’s News? No Problem! – You can access all of our past newsletters by going to GrowOmaha.com and clicking “Market Report” on the navigation bar. Each of those newsletters has “New Restaurants & Retailers” list first, because EVERYONE wants to know that! 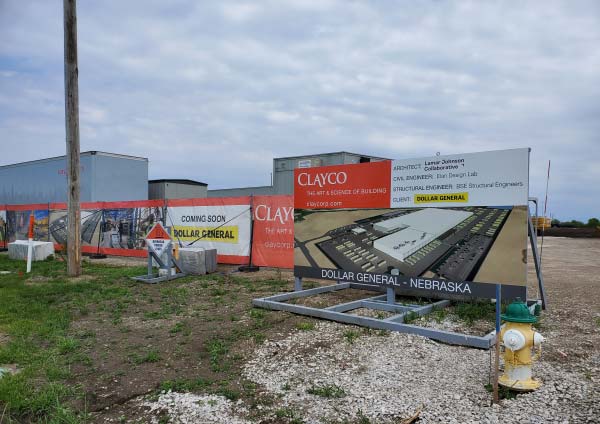 Construction is now underway on an 800,000 sq. ft. warehouse and distribution center for Dollar General along U.S. Highway 75 on the south side of Blair. The sprawling building will sit on an 85-acre site near Blair’s biorefinery campus.

The $85 million complex will eventually employ 400 people and contribute $106 million per year into the metro area’s economy. Completion is slated for early 2022.

Dollar General opened its first Nebraska store in 1992 and curently employs 1,100 people in the state in more than 130 stores. The Tennessee-based retail chain is growing rapidly. In fact, CNN reported earlier this month that nearly one in three new stores opening in the United States this year will be Dollar Generals.

The $103 million music venue under construction on a former surface parking lot at 12th and Dodge will be known as “Steelhouse Omaha.” The building will hold up to 3,000 patrons, allowing it to host a wide variety of concerts that are too big for clubs but too small for a venue like CHI Health Center Omaha. Steelhouse Omaha is scheduled to open in 2023.

The Eastern Nebraska Veteran’s Home at 12505 South 40th Street in Bellevue is planning a 24-room addition. The project is out to bid now and construction should begin soon.

Construction is expected to begin in July on a four-story Dewey Park multi-family building at 3306 Jones Street. Previously existing buildings on the site have been razed.

Agemark Senior Living held a ribbon-cutting May 26th for its CountryHouse Residence for Memory Care at 3720 George B. Lake Parkway. The facility has capacity for 40 residents.

The U.S. Olympic Swim Trials begin in early June at CHI Health Center Omaha. The competition pool is in place and filled with 1.1 million gallons of water. 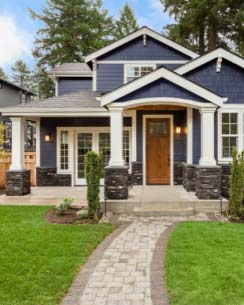 Omaha-based Buildertrend has been named for the second year in a row to Inc. magazine’s annual list of the Best Workplaces for 2021. With an engagement score of 96 percent, Buildertrend ranked among the highest scoring companies honored on the list.

Union Pacific Corporation will increase the quarterly dividend on the company’s common shares by 10 percent to $1.07 per share. The dividend is payable June 30, 2021, to shareholders of record May 28, 2021. Omaha-based Union Pacific has paid dividends on its common stock for 122 consecutive years.

The Dundee Book Company, which had been known as a “roving” bookstore, has opened a permanent location at 4915 Underwood Avenue.

ACI Worldwide, which has an executive operations office in Omaha, has announced a collaboration with J.P. Morgan, a global leader across banking, markets and securities services, that will enable merchants in certain European countries to deliver in-store payment acceptance capabilities to their customers.

State of Nebraska tax revenue was slightly below the projections reported for April, with revenue of $525 million, about 1 percet below the forecast of $528 million. Individual income taxes were lower but corporate income taxes were higher than expected.

Warren Buffet’s Berkshire Hathaway has dramatically cut its stake in Chevron, dropping its investment in the oil giant from $4.1 billion to $2.5 billion. Berkshire also decreased its investments in Wells Fargo, US Bank and Synchrony Financial.

Cox Communications has appointed Rob Trebilcock as Senior Manager for Public Relations for the Omaha market.

The law firm Koley Jessen has added Bowei Wan as an associate on its corporate team and Peter Langdon to its employment team.

WoodmenLife has appointed Lynne Barr as Director of Core Operations Compliance and Customer Support. Barr has spent her entire 38-year professional career at WoodmenLife, serving in many roles.

Baird Holm partner Lindsay Lundholm has been appointed to the American Arbitration Association (AAA) Roster of Arbitrators, a not-for-profit organization which aims to move complex cases through arbitration fairly and cost effectively, with the goal of getting parties back to business as soon as possible.

Have Watched Grow Omaha on Video?