Interior build-out is underway on Mootz Pizza in a small bay on the north side of Countryside Village near 87th & Pacific Street. Mootz Pizza started as a food truck and serves “fire-kissed” pizza.

Dave’s Hot Chicken has leased a space in a strip center at Saddle Creek Road and Davenport Street. The center is already home to Chipotle and Bank of the West. Dave’s is a chain of Nashville-style spicy chicken restaurants that started in the Los Angeles area.

Mouth of the South has opened an Old Market location in a former Old Chicago space at 1111 Harney Street. The existing location is at 168th & West Center Road.

A Casey’s General Store is under construction on the northwest corner of 204th & Vinton Street (southwest of 204th & West Center Road) at the entrance to the Privada development.

What’s going on at 144th & Center? We have had a number of subscribers ask about construction activity in the parking lot in front of a former Shopko store. Site preparation is underway for a future QuikTrip (QT) convenience store and gas station. 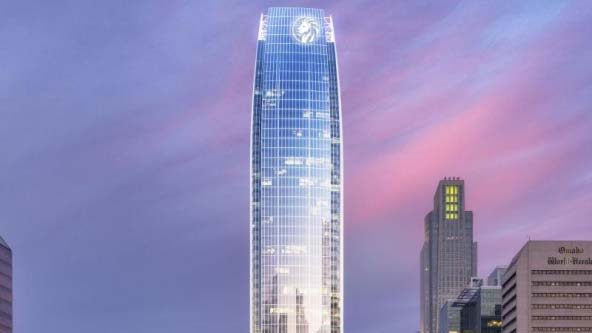 The Omaha City Council has approved a redevelopment agreement that will pave the way for Mutual of Omaha’s planned $600 million skyscraper headquarters building on the current W. Dale Clark library site at 14th & Farnam Street downtown.

Mutual of Omaha has not released final details about the building, but the tower is expected to be 45 stories possibly making it the tallest building in the city. The First National Tower is currently the city’s tallest building at 634 feet.

The redevelopment agreement allows Mutual to acquire an additional city block (immediately east of the library site). That site will be used as a staging area during the three years it will take to build the new tower. After that, the block will be converted into a park until it is needed for future Mutual of Omaha expansion.

Additionally, the City of Omaha will purchase and operate a $99 million, 2,200-stall parking garage that would be part of the new headquarters building complex as well as three parking garages on Mutual’s current midtown campus.

The agreement also requires the city to develop the planned 3-mile, $306 million streetcar line that would connect downtown to the University of Nebraska Medical Center. Mutual of Omaha has previously stated that the new tower would not go forward without the modern streetcar.

A major addition is in the planning stages at Omaha South High School. With nearly 3,000 students, Omaha South is the largest high school in the state. It is also a visual and performing arts magnet school. Fundraising is now underway for “Art in the Heart of South Omaha,” a campaign led by Thompson Rogers and Michael Yanney to raise $15 million for a new arts center. Plans call for a major addition on the southwest corner of the high school building at 4519 South 24th Street. Not only would the new addition make room for arts education and performance functions, it would provide a dramatic new main entrance for the school. To learn more or donate, click HERE.

Developers plan to convert a 40,000 sq. ft. vacant fitness club at 2718 North 120th Street into a 6-story apartment building. Components of the 24-Hour Fitness club will be incorporated into the $35 apartment project. Plans call for 150 market-rate units.

Construction is in full swing on a 30,000 sq. ft. space inside an historic building at 1401 Jones Street. That’s where public-facing library services will relocate from the current W. Dale Clark Library building. Once the new building is ready, the existing library will be demolished to make way for Mutual of Omaha’s new headquarters.

Omaha was ranked 36th in a second WalletHub list this week: — “2022’s Best & Worst Places to Start a Career.” WalletHub examined 182 U.S. cities in order to help new graduates start their careers. The study considered 27 metrics that ranged from the availability of entry-level jobs to monthly average starting salary to housing affordability.

Real Estate News from CoStar –  Office landlords, on the lookout for new features to lure and keep tenants, are turning to an increasingly common perk in the pandemic: on-site medical clinics for the exclusive use of workers in the building.

While the trend of large employers offering on-site medical services isn’t new, landlords are embracing the addition of these services for their buildings, where tenants can include small firms that can’t afford to have health clinic setups just for their employees. For landlords, the amenity can foster goodwill and become a viable selling pitch for their buildings, especially the majority of U.S. workers in cities such as New York still haven’t returned to the office.

Omaha-based Carson Wealth acquired Connecticut-based Karn Couzens & Associates, Inc., a full-service financial planning and wealth management firm with offices in Farmington and Wallingford. The firm will rebrand to Carson Wealth and will be the 35th Carson Wealth branded office in the U.S. The 10-person team is led by managing directors and wealth advisors, Robert A. Karn and Jeffrey P. Couzens and has $800 million in assets under advisement. This will be the first Carson Wealth location in Connecticut.

Buildertrend has been named for the third year in a row to Inc. Magazine’s annual list of the Best Workplaces for 2022. With an engagement score of 93.94 percent, Buildertrend ranked among the top Extra-Large Companies on the list.

Omaha-based Green Plains Inc. has announced a partnership with the Riverence Group to form a joint venture to expand aquafeed production in Idaho. The venture will produce trout and salmon feeds for the Riverence Group, utilizing wholesome, sustainable ingredients including the 60%+ fermented protein product recently announced after the success of the development trial at Green Plains Wood River.

Berkshire Hathaway has revealed – in a Securities and Exchange Commission filing – all the stock investment moves it made during the first quarter of this year, which totaled $51 billion, according to AP. Monday’s filing revealed new stakes in Citigroup, Ally Financial, Paramount Global, Markel, Celanese Corp. and McKesson Corp.

Berkshire also added 2 million General Motors shares to give it 62 million shares of the automaker during a quarter when its cash pile shrank to $106 billion from $147 billion because of all its stock purchases. At the recent shareholders meeting in Omaha, Berkshire announced Q1 investments in Chevron, Occidental Petroleum, HP Inc., Apple and Microsoft.

The Creighton University Rural Mainstreet Index fell from April’s healthy reading and remained above growth neutral for the 18th straight month, according to the monthly survey of bank CEOs in rural areas of a 10-state region dependent on agriculture and/or energy. The region’s overall reading for May declined to 57.7, its lowest level since February 2021 and down from April’s 62.0. The index ranges between 0 and 100 with a reading of 50.0 representing growth neutral.

When onboarding new employees, consider setting up regular small group coaching sessions – timing is up to you (once a week or even more than once a week). Make it mandatory until the new employee “graduates.” These sessions should be in addition to regular the one-on-one meetings you hold with each employee.

The best leaders are wise. One way to become wiser is to enrich your life, according to Walden University. Wise leaders do more listening than talking. They seek ways to constantly grow to understand the breadth and depth of the world around them. They have a quest for knowledge that knows no bounds.

The top ways to create a positive sales experience for buyers, according to HubSpot:

Prospecting is more difficult than it was 10 or 20 years ago. That’s why sales reps need “business acumen,” powerful messages that engage cold prospects in meaningful ways. Developing these messages is a great teamwork opportunity. Have each rep in your company write a certain number of effective prospecting messages and then share them with the group. Everyone on your team ends up with prospecting language they can use right away.

“When you allow risk management to metastasize into risk aversion, you have just boarded a train to bureaucratic mediocrity.” – Dr. Kim Hoogeveen of MindSet, an Omaha-based leadership training and consulting firm

My Staff Inc – Our team helps you find yours!

Clayton Anderson, Nebraska’s first – and currently only – NASA astronaut, is the new president and CEO of the Strategic Air Command & Aerospace Museum in Ashland. Anderson, 63, was born in Omaha, grew up in Ashland and has degrees from Hastings College and Iowa State University. Anderson worked on board the International Space Station and spent a total of 166 days in space.

David Brown, recently retired CEO of the Greater Omaha Chamber, has been named lead consultant of a Madison, Wisc. firm, according to Nebraska Examiner. Brown, who led the Omaha chamber for nearly 19 years, will continue residing in Omaha and will work remotely on a project-by-project basis for NEXT Generation Consulting.

In Memoriam – Greg Cutchall, president and CEO of Cutchall Management Company died earlier this week at age 69. At the time of his death, Cutchall Management owned 44 restaurants including some very well known names in Omaha: Jams American Grill, Paradise Bakery & Café, Mouth of the South and First Watch.