New Restaurants in Midtown! – Two brand-new restaurants are getting close to opening at Midtown Crossing. Smokin’ Oak Wood-Fired Pizza will open May 25th at 220 South 31st Avenue. Customers can customize their pizza order and watch it being made right in front of them in an open-plan kitchen. Pa Mas Taqueria and Grill, featuring Latin American street food, should open later this month in the former Black Oak Grill space.

The Coffee Machine – Starbucks plans to build a free-stading store with a drive through on the northwest corner of 90th & Fort Street.

From Cupcakes to Tacos – VooDoo Taco plans to open in a 4,000 sq. ft. building once occupied by Jones Bros.Cupcake’s west location at 2615 South 180th Street.

Incubating Beer – Site-1 is a brewery incubator and tap house that opened earlier this year at 2566 Farnam Street downtown. The company provides equipment and expertise to allow brewers to scale their craft without the upfront costs of opening their own breweries

Can We Add “Entertainment” to This Section? – This really isn’t a new restaurant or retailer, but it seems to fit in this section. The new Quasar Drive-In Theatre opens May 13th at 13427 North 300th Street. That’s on the north side of Highway 36 just a little east of U.S. Highway 275 northwest of Valley. The property can accommodate more than 500 cars, has a full-service concession facility and boasts an 85-foot Cinemascope Screen plus 4k UHD laser projection.

Forgot Something? – We have heard from many people who missed one our previous newsletters and were suffering from FOMO – Fear of Missing Out – especially when it comes to our restaurant coverage. Don’t worry, you can access all of our past newsletters by going to GrowOmaha.com and clicking “Market Report” on the navigation bar! 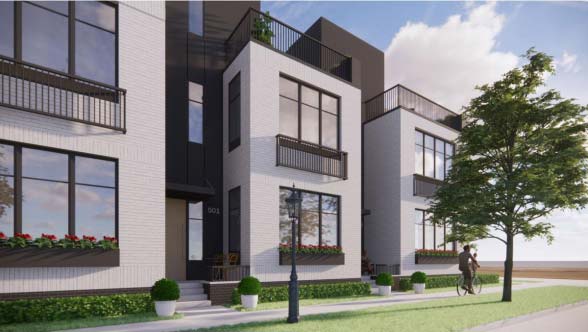 The anticipated $2.7 billion Project NExT at the Med Center should spark a massive midtown building spree, but in many ways, the area is already booming. Several multi-family projects are underway.

Noddle Companies has removed a dilapitated house at 38th & Dewey Avenue and will soon begin construction on six row houses, each with 2,500 sq. ft. and a two-car garage. The project is a $4.3 million investment.

Plans call for a 44-unit apartment building on what has been a vacant lot at 524 Park Avenue. The building would be four stories.

Construction on the Dewey Park Apartments should begin soon at 33rd and Jones Street. Three existing buildings have already been demolished. The $8.5 million project would have 55 apartment units in a four-story building.

Just as multifamily construction is booming in Midtown, one project will cut the number of units down a little bit. In the heart of the Blackstone business district, at 3863 Farnam Street, three small multi-family buildings will be removed. One of the buildings was damaged by fire a couple years ago. Plans call for a two-story, 11,000 sq. ft. building to be constructed in its place that would include multiple restaurants and a rooftop deck overlooking Farnam.

The Tower District is a mixed-use development of approximately 84 acres planned for the northwest corner of 84th and Highway 370 in Papillion. The “walkable” project will have multi-family, senior living, single-family, office and retail components as well as a community park and connected trails.

Creighton University officially broke ground on its $75 million CL Werner Center for Health Science Education on the southwest corner of the North Freeway and Cuming Street. The five-story, 130,000 sq. ft. building will be home base for the university’s school of medicine.

A Michigan real estate company studied 50 metro areas across the nation and found that Omaha ranked second on the list of most competitive real estate markets. In Omaha, 67 percent of houses sell in two weeks or less compared to only 42 percent nationwide.

The City of Omaha plans to construct the “Baby Bob,” a pedestrian bridge that will link North Downtown with the existing Bob Kerry Pedestrian Bridge which spans the Missouri River between Nebraska and Iowa. The Baby Bob will cost $6.4 million and is scheduled to open in 2023.

The new Valmont headquarters near Applied Parkway & West Dodge Road is nearing completion. A Valmont subsidiary known as “Locker,” is working to adorn the new building with a special facade that optimizes sunlight while reducing energy costs by 5-to-25 percent.

Construction should begin soon on an apartment development at 12th & William Street in Little Bohemia. The 107-unit building is expected to open in 2022.

Good news! Midtown Crossing has announced that Jazz on the Green will return to Turner Park this summer. The season will run from July 8th to the 29th. Concerts start at 7:30 p.m. with a pre-show at 6:30 p.m.

FNBO and NP Dodge have collaborated on a targeted marketing agreement which puts FNBO loan officers on-site in NPDodge offices throughout the area.

Omaha-based Valmont Industries, Inc. has entered into a definitive agreement to acquire Prospera Technologies Inc., a privately-held Israeli-based Artificial Intelligence company, focused on Machine Learning and Computer Vision in agriculture. The transaction, valued at approximately $300 million, is expected to close in late 2021.

Over the past year, Omaha-based Scoular has invested in a trade and regional support team in Singapore and expanded its distribution capabilities in Indonesia and Myanmar, extending the company’s supply chain further into the fast-growing Asia-Pacific region.

ACI Worldwide, which has a major executive office near 204th & Q Street, announced financial results for its first quarter which ended March 31st. Revenue was $285 million, which was down 2 percent from the first quarter of 2020. The company is a leading global provider of digital payment software.

Omaha-based Buildertrend has been named to Inc. Magazine’s annual list of Best Workplaces for 2021 for the second year in a row. With an engagement score of 96 percent, Buildertrend ranked among the highest-scoring companies on the list. Buildertrend provides cloud-based project management software for homebuilders.

Tenaska, one of the leading independent energy companies in the United States, has been selected as a 2021 US Best Managed Company. Sponsored by Deloitte Private and The Wall Street Journal, the program recognizes outstanding private companies and the achievements of their management teams. Tenaska’s headquarters is located near 144th & West Dodge Road.

Attention Businesses: We have an appetite for news! Because of our electronic-only format, we have plenty of room for more business briefs. Send your announcements and press releases to news@growomaha.com. Publishing decisions are at Grow Omaha’s sole discretion. 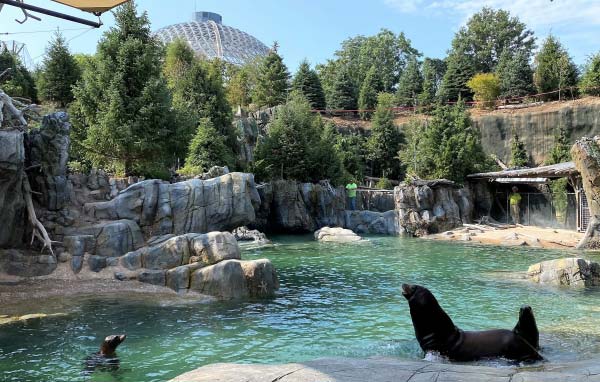 The Omaha Metropolitan Tourism Awards recognizing the best tourism-related businesses in Douglas, Sarpy and Pottawattamie counties have been announced. More than 6,000 votes were cast. Here are the results:

VOTE FOR THE ZOO!

USA TODAY’s 10 Best Readers’ Choice Travel Awards has once again selected Omaha’s Henry Doorly Zoo and Aquarium as a contender for “Best Zoo” and Wildlife Safari Park for “Best Wildlife Park” in America. Asian Highlands has also been nominated as “Best Zoo Exhibit” in the country.

Voting will remain open until Monday, May 24 at 11 a.m.Each person can vote once per day, per device for the run of the contest.The top 10 zoos, zoo exhibits and wildlife parks with the most votes will be announced on the 10 Best’s website on Friday, June 4, 2021. The winners will also be announced in USA TODAY newspaper.

Visit Omaha has created the Rent for Recovery program. The official tourism authority for the City of Omaha and Douglas County will give up its current office space for 12 to 24 months, saving approximately $250,000. During that time, Visit Omaha will use a prtion of the savings to support the tourism industry by booking meeting rooms at different hotels, attractions and restaurants where it will conduct business.

During the Rent for Recovery Initiative, Visit Omaha will use the Omaha Visitor Center at 306 South 10th Street as its administrative headquarters while searching for new office space.

Michael Sladek has been promoted to vice president of brokerage sales at Mutual of Omaha. He directs, oversees and coaches national sales directors in activities to increase sales and profits, reduce expenses, and retain business.

Omaha author Venton Wilder has published his first book, Captain Buckets: The Fundamentals of the Game, the first in a series of booked called “Blac Amer.” Wilder is the head of GBOD Basketball Academy and also provides coaching/training at Lifestyle Fitness in Waterloo.

Six call center employees at Omaha-based Physicians Mutual were the first
graduates of the AIM Institute’s “Callers to Coders program,” which enables workers to learn tech skills twice a week while on the clock. Completion of the yearlong program, which included five modules of AIM Code School’s accredited curriculum, earned the employees skills for advancement to roles in the technology field.