Just Like the Windy City – Chicago Dog 42 has opened in the food court at Oakview Mall. In addition to authentic Chicago-style hotdogs, the business sells brats, corn dogs, Italian beef sandwiches and even an “Arizona dog.”

New to Nebraska and Iowa – Restore Hyper Wellness plans to open its first Nebraska or Iowa location soon at Village Pointe Shopping Center. Founded in 2015, Restore Hyper Wellness is now a market leader in one of the fastest-growing healthcare segments: improving your body’s defense system. The Austin, Texas-based company has multiple locations in 33 states. The closest existing locations are in Denver and Kansas City.

Restaurant Space Available in Dundee – Varsity Sports Café & Roman Coin Pizza has closed its 49th & Dodge Street location but other locations remain open. The building’s owner is looking for a new restaurant to take over the space. 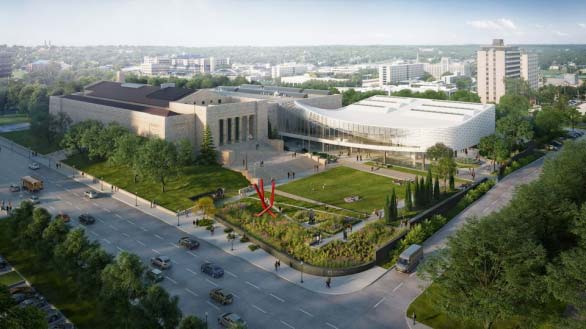 When it comes to tourism, Omaha tends to more of a weekend-getaway destination. Lacking beaches, mountains – and year-round 72-degree temperatures – Omaha draws people looking to go shopping, enjoy the arts, visit the zoo and dine in our unusually large collection of outstanding restaurants.

Of course, the CHI Health Center Omaha attracts major conventions and meetings, but Omaha really shines as a visitor destination when individuals, couples and families are looking for a great place to spend two or three days.

A couple recent developments – each of them $100 million investments – will go a long way toward bolstering Omaha tourism. As we reported a few weeks ago, the Kiewit Luminarium is a science museum under construction on Lewis & Clark Landing and should open in 2023.

Just this week, Joslyn Art Museum released renderings of its Rhonda and Howard Hawks Pavilion, a 42,000 sq. ft. addition scheduled for completion in 2024. New York architecture firm Snøhetta is leading the project but is working with Omaha-based Ally Poyner Macchietto.

The addition will be like no other building in the state of Nebraska and is sure to become a local landmark. Renderings are available HERE.

NP Dodge held a ribbon-cutting this week for its new residential real estate sales office in the recently renovated 8601 Dodge Building. The building has office space available on the second and third floors and retail/commercial space on the ground level. A free-standing Starbuck’s restaurant is under construction in the parking lot.

Now that the ORBT bus rapid transit line has been operating for several months along the Dodge Street corridor, it may be time to expand the system. Metro Transit kicked off a study to determine if 24th Street (from Ames Avenue to Q Street) would be a feasible route. The $3 million study should be completed in 2023.

Temporary fencing has been installed around the former Ramada Hotel and Coco Key Indoor water park to prepare the complex for demolition. Once the building is removed, construction can start on Maverick Landing, a mixed-use development that would include restaurants, a hotel and apartment units.

Blackstone District businesses and community leaders are planning a $4.4 million upgrade of the historic district located along Farnam Street in Midtown. Plans call for improved traffic safety, wider sidewalks, decorative lighting and other amenities. Completion is scheduled for 2024.

Metro Crossing Shopping Center located northwest of Interstate 29 and U.S. Highway 6 has been sold from one investment group to another. The 310,000 sq. ft. shopping center was 96 percent occupied, which is pretty high in today’s current retail market. Anchor tenants include Kohls, Dick’s Sporting Goods and TJ Maxx. The center has a total of 57 tenants.

The “Market-to-Midtown” bikeway is now open along Harney Street between downtown and Midtown. The last stretch from City Hall to the Old Market remains to be completed. The bikeway occupies the southern lane of Harney Street and features temporary barriers which separate bicyclists from automobiles. The bikeway is an 18-month pilot project to see if demand justifies permanent construction.

Recreation enthusiasts in north-central Omaha have been waiting a long time, but Cunningham Lake park will officially reopen August 5th following a $23 million, three-year renovation project that included the lake itself and the surrounding 1000-acre park.

Real Estate News from CoStar – Search engine giant Google is the latest major employer to delay plans to fully reopen its offices as coronavirus cases start to inch back up across the country and the more contagious delta variant of the virus gains a foothold. The Mountain View, California-based company, with a U.S. workforce of about 145,000, said Wednesday it would push its initial September return-to-office date to at least mid-October, an announcement that comes about a week after fellow tech giant Apple made a similar call. Both companies were among some of the first to send workers home at the pandemic’s start early last year. READ MORE.

Equitable Bank has opened a second Omaha location at 202nd & Pacific Street. The first local office is in Old Mill South. The new full-service branch occupies 3,500 sq. ft. of a 9,000 sq. ft. building that was just recently completed. Grand Island, Nebraska-based Equitable Bank was founded in 1882 and has total assets of $425 million.

HyVee, Inc. of Des Moines, Iowa, has launched Hy-Vee Financial Services in partnership with Midwest Heritage. Hy-Vee’s customers in eight states including Nebraska can now apply for financial services such as checking/savings accounts, home/auto insurance, home mortgages and consumer loans. The company expects to add other offerings such as life insurance and health insurance within the next year.

Sapp Brothers is celebrating its 50th anniversary this summer. Four brothers founded the original Sapp Brothers travel center near Interstate 80 & Highway 50 in 1971. The iconic coffee pot (water tower) has been an Omaha landmark ever since. The company has grown into a major wholesale petroleum distributor and operates 17 travel centers from Salt Lake City to Pennsylvania.

You may have noticed a new bank in town known as i3 Bank. Actually, it’s not new at all. It’s just a new name for the nearly 100-year-old Bank of Bennington. The name change will make it easier for i3 Bank to penetrate new geographic markets.

Valmont Industries, Inc., an Omaha-based Fortune 1000 company, has reported financial results for the second quarter ended June 26, 2021. Highlights include record net sales of $894.6 million, an increase of 29.9% with growth in all segments, led by significantly higher sales in irrigation and utility support structures.