Bringing the Curry to Dundee – Jaipur Indian Restaurant & Brew plans to open a second location inside the former Kith & Kin restaurant space at 5018 Underwood Avenue in Dundee. The original Jaipur restaurant is located in Rockbrook Village.

Just a Temporary Set-Back – A kitchen fire has temporarily closed the Tired Texan barbeque restaurant on the southwest corner of 108th & L Street. The owner plans to reopen in mid-July.

Rarefied Air – Mahogany Prime, located near 137th & West Dodge Expressway has been named as the best steakhouse in Nebraska by MSN, which wrote: “Every detail at Mahogany Prime Steakhouse in Omaha is refined beyond your wildest expectation.”

From One Chain to Another – We have an approximate start date for a restaurant conversion in Papillion’s Shadow Lake Town Center. It’s August 2nd. That’s when work will begin on the 6,214 sq. ft., free-standing, former Old Chicago building, converting it into an Olive Garden location.

Gretna Retail Expansion – Construction is expected to begin in October on an AutoZone store to be located along Highways 6 & 31 in Gretna. 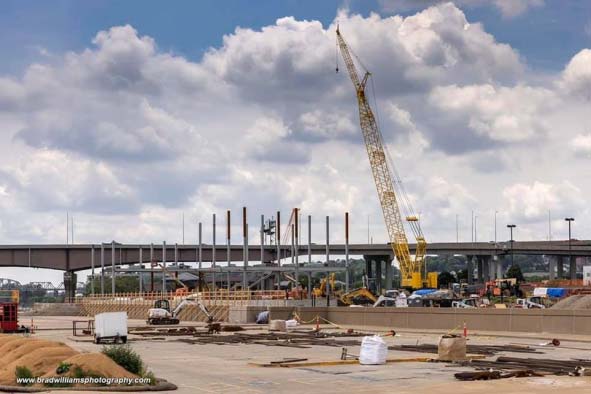 Construction is going vertical at Lewis & Clark Landing along the Missouri River. In other words, steel beams are now being assembled for the new Kiewit Luminarium science and technology museum. The $101 million building is under development on the site formerly occupied by Rick’s Café Boatyard restaurant.

When the privately funded Kiewit Luminarium opens in early 2023, it will serve as an anchor for the three riverfront parks currently under renovation and will likely draw visitors from across the nation. The $300 million park renovation project includes Lewis & Clark Landing, Gene Leahy Mall and Heartland of America Park.

Now that the College World Series is complete, the Riverfront activation team, led by the Metropolitan Entertainment & Convention Authority, is already making plans to entertain visitors for the 2022 baseball classic.

At this time next year, Gene Leahy Mall will have been reopened for just a couple weeks and will be programmed with outdoor fitness classes, game carts and food/beverage stations. Space will be available for parties, gatherings and corporate events.

Meanwhile, at Heartland of America Park, work has begun on the new north shore line of the lake. The lake, which is still home to the iconic fountain, has been reduced in size to provide more usable land in the park.

Mills County, Iowa has landed a huge economic development prize. A newly created company known as Cattlemen’s Heritage Beef plans to build a $325 million beef processing plant along Interstate 29 south of Council Bluffs and north of Glenwood, Iowa. The plant will process 1,500 head of cattle per day. Construction is scheduled to begin next spring with opening planned for late 2023.

The plant will employ 750 people who will earn an average annual wage of $55,000 plus benefits. According to Creighton University economist Ernie Goss, the plant will likely create 3,319 direct and indirect jobs and make a $6.4 billion impact on the metro area economy from the start of construction through the first five years of operation.

Bridgepoint Investment Bank has relocated its headquarters to the Landmark Building at 13th and Farnam Street downtown. The company hopes to use the high-profile office to help it recruit talent from around the world. The Landmark building is also home to the newly opened Farmam Hotel.

Construction is expected to begin August 2nd on the Avamere Senior Living facility in Papillion. Located on Pinnacle Drive, the project will include a 3-story, 197,000 sq. ft. main building plus 21,400 sq. ft of villa units.

Berkshire Hathaway announced this week that the Oracle of Omaha has reached a philanthropic milestone. In 2006, CEO Warren Buffett pledged to distribute all of his Berkshire Hathaway shares, more than 99 percent of his wealth, to philanthropy. He made a $4.1 billion distribution June 23rd. In 2006, Buffett owned 474,998 “A” shares. He now owns 238,624 shares worth about $100 billion. Buffett says all of his remaining shares will eventually be donated.

Charles Schwab, the company that acquired Omaha-based T.D. Ameritrade, announced it will add more than 200 jobs in Omaha, increasing its local workforce to approximately 2,400 people.

Advertising agencies are famous for their creative, young employees, but some of the ad firms themselves have been around for quite some time. That’s definitely the case with Omaha-based Bozell, which is celebrating 100 years in business.

Mayor Jean Stothert has promoted Deborah Ward as executive director of the Omaha Convention & Visitors Bureau. Ward had been serving as interim director since last July and was previously the bureau’s long-time vice president of marketing and communications.

Quinn Cooper is the new executive director of the Ralston Chamber of Commerce effective July 1st. Cooper most recently served as membership manager for the Sarpy County Chamber.

QUESTION: Who Else Should Read This Newsletter?