Isla Del Mar Restaurante, a highly acclaimed Mexican seafood restaurant at 5101 South 36th Street, is planning a second location near 132nd & West Center Road. The restaurant will open soon in a former ALDI Grocery Store space next to Dave & Buster’s. The space became available when ALDI moved a block south to Baker Square, a block to the south.

A new restaurant known as “Get Real Sandwiches” plans to open soon next to Butterfish at 3901 Farnam Street in the Blackstone District. Get Real has applied for a liquor license, and interior build-out is underway inside the space.

Panera has opened inside a former Potbelly Sandwich Shop bay at 8350 South 71st Plaza in The Shoppes at Market Pointe in Papillion. The Panera had been located a few blocks to the south but moved in order to have a drive-thru lane.

REI, which stands for Recreational Equipment, Inc., plans to open a store at Nebraska Crossing near Interstate 80 and Highway 31 this summer. The store will be located in a 25,000 sq. ft. building to be built immediately east of Under Armour and west of HomeGoods. Construction will begin very soon. Based in Kent, Washington, REI has 165 stores in 39 states.

Wall to Wall Wine and Spirits has opened its second-ever store in Shadow Lake Town Center near 72nd & Highway 370. Wall to Wall is a new liquor superstore concept created and operated by Hy-Vee. The first location opened recently in West Des Moines, Iowa. Another Omaha-area store will be opening soon near 132nd & West Center Road. Additional stores are planned Hy-Vee’s other markets. 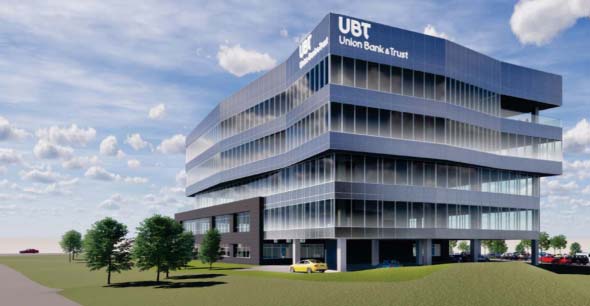 The past year has brought substantial changes and construction progress to Heartwood Preserve, the 500-acre mixed-use development which stretches from West Dodge Road to well south of Pacific Street. Much of the development sits on the former Boys Town west farm.

The $1 billion-plus project is being developed by Applied Underwriters, which will have its future headquarters on the south portion of the development. Heartwood Preserve will have several corporate headquarters, a variety of residential options, park space, a hotel, retail space and a large, pedestrian-oriented, mixed-use component in the middle of the development.

Here’s an update of recent progress:

APPLIED UNDERWRITERS – Applied’s campus has seen construction return to regular scheduling of its Omaha headquarters and is slated for early 2024 occupancy.

VALMONT INDUSTRIES has completed its new headquarters and the company’s staff began to move into its new office space that can accommodate up to 500 employees.

CARSON GROUP celebrated the completion of its 6-story headquarters building with a ribbon cutting joined by Governor Pete Ricketts and Mayor Jean Stothert.

HEARTWOOD ESTATES – All available plots were pre-sold. The future homeowners are applying for permits to start building in the spring.

LOCKWOOD DEVELOPMENT – Just north of Heartwood Park, the Lockwood enclave has closed to new buyers as the project moves into the next phase, an additional 7.5 acres that will be home to Heartwood’s first retail businesses.

RESIDENTIAL DISTRICT – The residential district north of Pacific Street has seen its grading completed, making way for streets and infrastructure to go in next summer as the neighborhood’s 234 homes begin construction.

GREENWAY A – The northern portion of this large tract that runs from West Dodge Road to Pacific Street is now 25 percent complete.

GREENWAY B – The elegant Greenway along Pacific Street is now complete.

HEARTWOOD PARK PHASE I – Earthmoving and grading were completed and sod has been planted to start the build-out of its boulevard-like sector.

Construction has started on an MD West One Medical Office Building southwest of 192nd & West Dodge Expressway in the Fountain Ridge West development. The 38,000 sq. ft. medical facility will be one story. Structural steel has gone up this week. Darland Construction and R&R Realty are working with MD West One. Opening is planned for late 2022.

A Nebraska state legislative committee has unveiled plans for a 4,000-acre recreational lake to be constructed along the Platte River immediately west of Gretna. The committee is known as the Statewide Tourism and Recreational Water Access and Resource Sustainability Committee or “Star Wars.” The lake would be part of a $200 million package aimed at water conservation, recreation and economic development.

The lack of major water recreation venues in the Omaha metro area has long been identified as an economic development and tourism weakness. Unlike previous lake proposals floated for the area, this one would not require damming the Platte River, nor would it flood the city of Ashland. The lake would be 7 miles long and up to 35 feet deep. Some of the land around the lake would be available for real estate development. The plan would have to clear a number of hurdles before becoming reality.

Turner Construction has started building a Chase Bank branch office on the east side of Shadow Lake Town Center in Papillion. Completion is planned for later this year.

A grand total of 48 condominium units were built in Omaha in 2021, according to attorney Bob Dailey of McGrath North and an expert in condo development. That number includes only 39 commercial condos and only 9 residential condos. Nebraska condominium law changed in 2020 in a way favorable to developers, Dailey said, but developers have apparently not yet realized it.

Real Estate News from CoStar – Record consumer spending and the return of shoppers to stores drove a resurgent U.S. retail environment in 2021. Contributing to the resurgence was the significant investment made by retailers to meet the consumer anywhere. Retailers quickly adopted or expanded curbside pickup programs, pushed buy-online-pickup-in-store options and offered same-day delivery capabilities wherever possible.

With many retailers now bearing the fruit of these strategic investments, the industry looks set to double down on omnichannel investments in the year ahead and, in doing so, will continue to shift the size, layout and location of their space needs. READ MORE

Scoular has opened a new high-speed flax processing facility in Regina, Saskatchewan, the first flax plant to open in Western Canada in nearly 10 years.  The opening coincides with a strong flax market and record-high prices for Canada. The Scoular Company is an Omaha-based grain trading and transportation company.

Omaha-based Streck announced a partnership with Ceres Nanosciences to distribute Nanotrap Magnetic Virus Particles that provide rapid viral concentration directly from raw sewage. This product reduces the time and effort required to test wastewater samples for COVID-19 surveillance. Wastewater surveillance can act as an early-warning system for COVID-19 “hotspots” within a community.

The Kimpton Cottonwood Hotel at 36th & Farnam (formerly known as the Blackstone Hotel) was named a bronze award winner in the Building Design+Construction 2021 Reconstruction Awards. The 18 winning projects are honored as the best in reconstruction, adaptive reuse and historic preservation.

Omaha-based Leo A. Daly provided full architectural and engineering design services, transforming the hotel from its previous use as commercial office space back to the grandeur of its heyday in the roaring 1920s when it was known as the premier stop-off between San Francisco and Chicago.

Chris Haire has been promoted to vice president and actuary at Mutual of Omaha. He manages the Medicare supplement and senior dental products to support the needs and expectations of our customers.

Barry Haire has been named vice president of member relations at The Greater Bellevue Area Chamber of Commerce.

WoodmenLife has promoted Joe Wieland and Nic Olari from director and associate general counsel to director and senior associate general counsel. In his role, Wieland will continue to provide legal counsel to the Human Resources and Fraternal divisions, as well as negotiate transactions and contracts. Olari’s role will be to continue to advise Woodmen Financial Services, serve as the Chief Compliance Officer for the WoodmenLife Variable Annuity Account, and handle litigation and arbitration proceedings on behalf of WoodmenLife.

Jerry O’Doherty, managing partner at Seim Johnson, LLP, has been named as treasurer of the Nonprofit Association of the Midlands, a state association that represents the interests of 650 nonprofit organizations in Nebraska and southwest Iowa.