The building that long housed legendary restaurant Petrow’s is home to a restaurant once again. Primo’s Modern Mexican restaurant, which has a location in Council Bluffs, is now open at 5914 Center Street.

Heavy Brewing, a local brewery plans to open at 20333 Patton Street in Gretna some time in 2022.

The Itis Blackstone opens today at The Switch Beer & Food Hall at 3618 Farnam Street in the Blackstone District. The restaurant is open 12 noon to 9 p.m. and serves both urban and comfort food.

Power Life, a yoga, barre and fitness studio, is set to open in January 2022 at One Pacific Place. The 3,000 sq. ft. space is located on the northwest side of the complex next to 801 Grill. To celebrate the grand opening, Power Life will offer free classes within the first few weeks of opening for patrons to visit the space and experience the various classes, formats and studios. 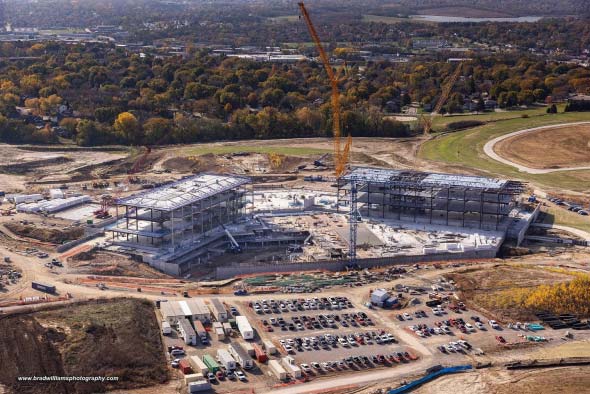 The Greater Omaha Chamber just published its 2022 We Don’t Coast magazine, a yearbook, of sorts, about the metro area. The publication acts as a guide for people who are visiting or possibly thinking about relocating their families or businesses to the area. The cover of this year’s edition features a photograph of the Applied Underwriters corporate headquarters under construction in Heartwood Preserve.

While the publication describes the arts, recreation and dining opportunities available within the 30 communities that make up Greater Omaha, part of the magazine looks at one of our favorite subjects: economic development.

The publication also touts Project NExT, the multi-billion-dollar endeavor planned by the University of Nebraska Medical Center and Nebraska Medicine. Project NExT is projected to create 8,700 permanent jobs and 41,000 temporary construction jobs. The project would generate $1.3 billion in annual economic impact.

The magazine also highlights two of the most impressive mixed-use developments under development anywhere in the Midwest: Heartwood Preserve and Crossroads.

Heartwood Preserve is a 500-acre development west of 144th Street starting at West Dodge Road on the north and extending well south of Pacific Street. Among many commercial and residential buildings that will eventually be located on the development, several major company offices are completed or under construction for Applied Underwriters, Valmont, Carson Wealth and Union Bank.

Crossroads is the 40-acre, $550 million project that will replace the demolished Crossroads Mall. That project is expected to come online in 2024.

Several community or non-profit development projects were featured in the publication including the $300 million overhaul of downtown’s three riverfront parks as well as the “Baby Bob,” a $6.4 million bridge that will span a railroad track, connecting CHI Health Center Omaha with the Bob Kerry Missouri River Pedestrian Bridge. The bridge is scheduled to open in 2023.

The Alamo Drafthouse in Midtown Crossing reopens today after a long pandemic-related shut-down. The La Vista location has been open for quite some time.

Core Bank has broken ground on its future full-service banking and mortgage center near 114th & Highway 370 in Papillion. The 3,500 sq. ft. office is scheduled to open next summer.

Scoular has moved into its new global headquarters building at 13660 California Street. The company was previously based downtown. Scoular spent $14 million renovating an existing three-story office building into suitable offices for its 130 headquarters employees.

Developers are planning a 24-unit row house project at 6th & Woodworth Avenue in the Dahlman neighborhood. The site is a vacant lot on Omaha’s south side. All units will be two-bedroom and would be contained within two, 2-story buildings.

Real Estate News from CoStar – U.S. office use eased off last week after a post-Thanksgiving rebound, an indicator of the difficulty in sustaining increases. Most of the major metropolitan areas tracked by security firm Kastle Systems saw office use dip in the week that ended Dec. 8th.

Kastle gathers anonymous employee data from workplaces where it provides access-control technology. While it is only a sampling of buildings by one security company, the data gives a peek into how employees and employers are responding to office use during the pandemic.

Werner Enterprises, Inc., one of the nation’s largest transportation and logistics companies, announced it signed a definitive agreement and closed on the acquisition of NEHDS, based in Monroe, Connecticut, for a purchase price of $64 million, which includes a $4 million earnout, according to law firm Koley Jessen, which acted as legal advisor to Werner.

ACI Worldwide, a global provider of real-time digital payment software with an major executive office in Omaha, announced a partnership with KyckGlobal, a digital payments firm, to enhance digital disbursements for biller organizations across the United States, providing an array of options including international and cash payments. KyckGlobal features a cloud-based payments engine with an array of payment types from which the recipient may select. These include PayPal, Venmo, ACH, wires, gift cards, push to card, cash and others.

Salaries & Inflation – Salary increases are on the way. Base pay could increase 3.9 percent on average in 2022, according to The Hustle newsletter. But there is bad news…inflation is up 6.8 percent this year in its fastest surge since 1982.

AMCON Distributing Company, an Omaha-based consumer products company, has declared a special cash dividend of $5.00 per common share. This cash dividend is payable on December 30, 2021 to shareholders of record as of December 23, 2021.

Union Pacific Corporation announced that its Board of Directors voted to increase the quarterly dividend on the company’s common shares by 10 percent to $1.18 per share. The dividend is payable December 30, 2021, to shareholders of record December 20, 2021. Union Pacific has paid dividends on its common stock for 122 consecutive years.

Baird Holm LLP has welcomed attorneys Erin Busch and Kristin Lindgren to the firm. Busch is a member of Baird Holm’s Health Care Section, where she focuses on regulatory compliance and contracting matters. Prior to joining the firm, she worked in the General Counsel’s office of a public higher education institution and her practice focused on data privacy and security, regulatory compliance, and governance issues. Lindgren is also a member of the firm’s Health Care Section. She previously worked in health care administration and became familiar with the inner workings of large health care systems.

David Mayer of Dvorak Law Group has been named Legal Advisor of the Year by The M&A Advisor. The award was presented to Mayer on November 17, 2021, at the 20th annual M&A Advisor Awards Gala at the New York Athletic Club, which honored the top professionals and firms in the M&A industry.

April Ayres has been promoted to vice president and actuary at Mutual of Omaha. Ayres oversees the Medicare supplement product line and is responsible for product growth, profitability and overall strategy. She joined Mutual of Omaha as an actuarial analyst in 2007. She was promoted to actuarial assistant in 2008, actuarial associate in 2011, managing actuary in 2014 and product performance director in 2017.