Prime Is Back in Time – After being closed for several months, Monarch Prime & Bar – as well as the Hotel Deco in which it’s located – has reopened for business.

Moving to Bellevue – The Omaha Bakery is leaving its original location at 608 South 72nd Street and relocating to a former Panera Bread store in Wolf Creek Plaza near 15th & Cornhusker Road in Bellevue. The company’s second location, which opened last September at 725 North 210th Street, will remain open. In addition to traditional baked items, Omaha Bakery has become well known for its Ketogenic offerings.

Grand Opening – The Nepali Restaurant + Bar will hold a grand opening at 11 a.m. on Saturday, August 7th at 5478 North 90th Street. The restaurant will serve momos and other Nepalese dishes.

New Liquor Super Store from a Familiar Brand – Hy-Vee is creating a new liquor store concept to be known as Wall-to-Wall Wine and Spirits that will offer “best-in-class” wine, spirits and craft beer. Other products will include specialty grocery items, including cheese, charcuterie, chips and crackers, sodas and seltzers as well as high-end barware and related accessories.

Two of the first four Wall-to-Wall stores will be in Omaha. The others will be in Des Moines, Iowa and Lincoln. One of the Omaha stores will open in a 22,000 sq. ft. space in Montclair shopping center near 132nd and West Center Road. Interior buildout is already underway on that space. The second Omaha location has not been announced. 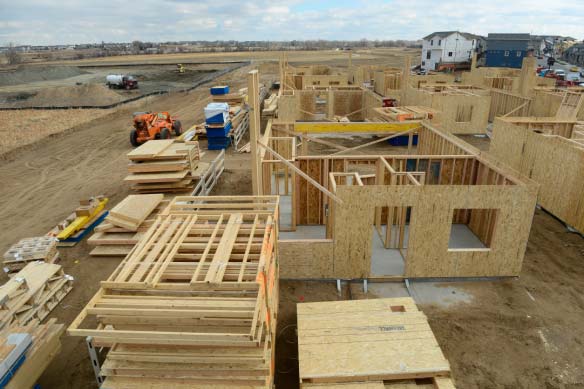 In Nebraska, there’s widespread acknowledgment that we simply don’t have enough affordable housing available to recruit the workforce needed to grow the state’s economy, according to Jim Vokal, CEO of the Platte Institute and host of the Nebraskanomics show.

Shockingly, Nebraska may be as many as 50,000 housing units short.

While Nebraska is not yet in the affordability crisis some states are facing, Vokal says the problem is getting worse. He listed three primary questions impacting the quantity of housing in Nebraska:

1. Is it worth the risk for developers to invest in new housing?

This is related to the price of land and raw materials. Businesses have to ask themselves whether building a new housing unit in a specific market can yield a worthwhile return on investment.

2. Do state or local policies restrict the types of housing or increase the cost of construction?

This can include policies like zoning. In the largest residential areas of Nebraska’s top cities, ordinances require a minimum lot size of anywhere from 5,000 to 9,000 sq. ft. Most of the time, the unit has to have two parking spaces, and no additional units can be built on the same lot. Requiring a house to be built by itself on a big lot means more economical choices may be out of reach, Vokal said.

Because housing and land use policy is typically decided at the local level, hyper-local preferences can dominate what construction is allowed where, and the prospects of new housing being approved.

“This means even if we all acknowledge that more housing is needed, we are probably not going to attend every local hearing to support more housing, while opponents will show up,” Vokal said. “The inclination to say it should be built ‘somewhere else’ could often win the day, and less housing actually gets built.”

Despite all of these potential barriers, Vokal argues that focusing on building more and different styles housing in Nebraska is probably one of the best areas for conservatives and progressives to cooperate right now and get things done for their communities.

“Letting more people build the kinds of housing they need—where they need it—strengthens property rights, improves affordability and the business climate,” Vokal said, “but it also provides more ways to promote walkability, different modes of transportation, and more efficient use of natural resources.”

Because of favorable summer weather, the 180th Street widening project from West Dodge Road to Blondo Street is nearing completion and could open a couple months ahead of the scheduled completion date of December 31st.

Buildout is underway on a Chase Bank branch in the former Boots for Less space in Montclair shopping center near 132nd and West Center Road.

Local developer Neeraj Agarwal plans to redevelop the historic Service Life Building at 1904 Farnam Street into 54 affordable apartment units plus street-level commercial space. The building is adjacent to Omaha’s city hall and has long been used for small office spaces.

Kids Can Community Center plans to break ground on August 10th on a new building northeast of 48th & Q Street, one block east of the current building. Founded in 1908 as the Social Settlement Association of Omaha, Kids Can is a non-profit providing early childhood care and out-of-school experiences.

A ribbon-cutting ceremony is planned for Live Hydration Spa Rockbrook at 10811 Elm Street on August 31st.

A local start-up company known as Fabric Bash is putting Nebraska on the national quilting map with an expansion that is expected to draw quilters from across the country. The family-owned textile, quilting, and arts-and-crafts store is moving into a larger space at 10351 Portal Road in La vista. The first location was at 11019 I Street.

ACI Worldwide, which has an executive office in Omaha, this week announced financial results for the quarter ended June 30th. Recurring revenue was $250 million, up 7 percent from Q2 2020. Total revenue in the quarter was $302 million, up 1 percent compared to Q2 2020. The company also signed multi-year strategic alliance with Microsoft to deliver cloud-based payment solutions. ACI is a leading global provider of real-time electronic payment solutions and software.

Firstar Fiber has added 5,000 sq. ft. to its Omaha facility in order to produce artificial “lumber” from recycled plastics.

Applied Underwriters, which has an operations headquarters in Omaha, received top honors in all 11 categories in a report published by Insurance Business America magazine. Agents across the nation were asked to vote, giving carriers a rating on a scale of 1 (poor) to 5 (excellent) in these categories: Competitive Rates, Underwriting Expertise, Overall Service Level, Product Innovation, Range of Products, Product Training and Marketing Support, Quick Quotes, Broker Communication, Claims Processing, Online Platforms and Services, and Appetite for Niche and Emerging Risks.

Carriers that received an average score of 4.00 or higher were named to the 5-Star level for that particular category. Only two of the 27 nominated carriers received scores of 4.00 or higher in all eleven categories. They were Applied Underwriters and Safeco.

INSIDE Public Accounting (IPA) recently announced its annual financial performance analysis and ranking of the nation’s largest public accounting firms. This year, Lutz of Omaha made its fourth appearance on the IPA Top 100 list, coming in at #83.

Omaha-based Green Plains Inc. has announced financial results for the second quarter of 2021. Net income attributable to the company was $9.7 million, or $0.20 per diluted share inclusive of a loss related to the sale of certain assets of $3.8 million and a $9.5 million charge related to a privately negotiated exchange of convertible notes compared with a net loss of $8.2 million, or $(0.24) per diluted share, for the same period in 2020. Revenues were $724.4 million for the second quarter of 2021 compared with $388.0 million for the same period last year.

Omaha-based Scoular has launched Barley MVP, a first-of-its-kind program which will help Idaho farmers to expand the production of barley as an economically viable and sustainable rotation crop. While Idaho is the top-producing barley state, only a small percentage of the barley grown in Idaho finds its way into the fast-growing feed, food, and processing sectors. By participating in Barley MVP, farmers can help to meet this demand by incorporating barley into their crop rotation.

Union Pacific Corporation has declared a quarterly dividend of $1.07 per share on the company’s common stock, payable September 30, 2021, to shareholders of record August 31, 2021. Omaha-based Union Pacific has paid dividends on its common stock for 122 consecutive years.

Metropolitan Area Planning Agency has appointed Michael Helgerson as the agency’s new executive director. Helgerson, 34, had been MAPA’s transportation and data manager. He succeeds Greg Youell, who left the agency for a position with Spirit Catholic Radio Network.

Melissa Glenn has been appointed as a commercial lender at First Nebraska Bank, which has an office at 20421 George B Lake Parkway.

Melissa Norem has been appointed as enterprise director of origination at Scoular. She will lead the company’s engagement and communication with farmers and develop origination strategies. She started her career with ADM and has been with Scoular the past 15 years, working in various trader and merchandiser roles.