We have an official opening date for a highly anticipated restaurant in the Old Market. Gather Omaha will open September 3rd in the former Market House location at 1108 Howard Street. The space has been empty since the infamous Old Market Fire six years ago. Gather has an existing location in Jackson Hole, Wyo. The restaurant has an aquaponic indoor agriculture system in the basement allowing it to grow its own food.

The former Salsarita’s building at 510 South 72nd Street will become a PepperJax Grill location. Like the new PepperJax near 132nd & West Center Road, this one will be in a free-standing building with a drive-through.

The Brownie Bar, located at 12th & Leavenworth Street, plans to add a second store in a yet-to-be-announced west Omaha location. The business bakes fresh brownies and allows customers to choose their own toppings.

Brickway Omaha, located in the Old Market, won three awards at the American Distilling Institute conference in Louisville, Ky. Brickway won gold for its double barrel bourbon, silver for its rye whiskey and silver for its sherry cask single malt.

The legendary Stella’s Bar & Grill in Bellevue was ranked number seven on Travel Magazine’s list of “The 7 Best Burgers in the USA.” No other restaurant in this region made the list.

Cornhusker Nutrition has opened at 2012 Cornhusker Road in Bellevue. The business sells smoothies, teas and shakes and operates a juice bar.

Goodbye to Several Restaurants – The following restaurants have closed: Wheatfield’s in the Old Market, Fuddruckers at 72nd & Dodge and Romeo’s at 2929 Farnam Street. 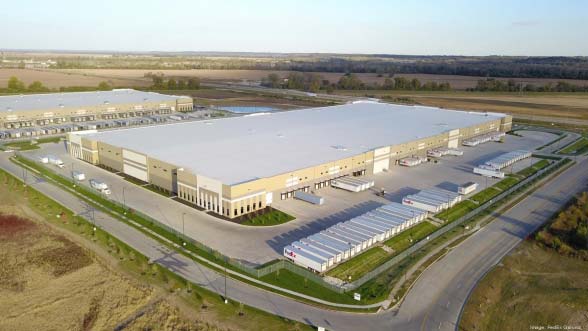 Site preparation and dirt work are now underway on a 500,000 sq. ft. distribution center for FedEX on the site of a former garden nursery southeast of Interstate 80 and Nebraska Highway 370. More specifically, the site is roughly bordered by Shepard Street to the north, Gold Coast Road to the south, 150th Street to the east and 153rd Street to the west.

The picture above is a 548,000 sq. ft. FedEx Ground facility which opened last fall in the Kansas City metro area. That facility created 300 new jobs. FedEx has not released details about the new Omaha facility. The company has been on a building spree recently across the nation in order to handle the rapidly increasing e-commerce economy.

Meanwhile, Omaha-based Noddle Companies will soon begin construction on a 56-acre industrial development in the Chalco area southwest of 144th & Chandler Road. Plans call for a total of 200,000 sq. ft. of flex, distribution and traditional warehouse buildings. Lease, build-to-suit and land sales are available. Construction is expected to begin soon.

Demolition on the former Ramada Hotel and Coco Key Water Resort will begin September 7th. Of the 16 acres that will comprise the future Maverick Landing mixed-use development, all but 1.5 acres are already under contract or have a letter of intent in place. The site will include apartments, a hotel and several pad sites for restaurants. One pad site, less than acre, recently sold for $1.2 million.

Last week we reported on the healthy population growth both in the City of Omaha and the broader metro area between the 2010 and 2020 censuses. The area’s demographics are changing as well.

The Hispanic/Latino population in Douglas County grew from 11.2 percent in 2010 to 13.8 percent in 2020. In Sarpy County, it grew from 7.3 percent to 10.5 percent. There are now 100,681 Hispanic or Latino people living in Douglas and Sarpy counties combined.

The City of Gretna is planning a large public park to be called “Gretna Crossing Park.” The $55 million project will include aquatics and soccer facilities. It will be located east of Highway 6/31 and north of Capehart Road. A green way and bike trail will run from the park for more than a mile south to Nebraska Crossing.

The old-style Sinclair gas station that had long been a local landmark at 13205 Millard Avenue will become a Mega Saver location.

Real Estate News from CoStar – National apartment real estate investment trust Camden Property Trust is joining the ranks of companies requiring employees to be vaccinated. The firm, with a portfolio of more than 57,000 apartments in the Sun Belt, California and Washington, D.C., said its employees, including property and maintenance managers at its apartments, have until October 11th to meet the requirement.

Camden Property is the 16th-largest U.S. apartment owner, according to the National Multifamily Housing Council’s 2021 list, and has $720 million worth of new development planned across seven projects.

Breeze, an Omaha-based “insurtech” startup, has raised the largest amount of first-round institutional capital ever by a Nebraska software start-up. Breeze’s $10 million Series-A round will help the company advance its mission “to protect American families in their most financially vulnerable moments.” The company was founded last year by Colin Nabity and Cody leach and offers disability and critical illness insurance. Breeze plans to add new products, carriers and agents to the platform.

Applied Underwriters of Omaha anticipates completing the acquisition of Alaska Timber Insurance Exchange (ATIE) as soon as the fourth quarter of 2021 as ATIE, an Alaska-domiciled reciprocal exchange, organized to write non-assessable workers’ compensation policies in that state, concludes its conversion from a reciprocal to a stock insurance company having received regulatory approval this past week.

Omaha-based Green Plains Inc. announced its wholly owned subsidiary Green Plains Mount Vernon LLC has broken ground on the construction of Fluid Quip Technologies’ MSC™ system in Mount Vernon, Ind. It will be the fourth Green Plains location to install MSC™ and is expected to be completed in 2022.

Union Pacific locomotives will be getting a boost of biodiesel fuel. Progress Rail, a Caterpillar company, approved the use of up to 20 percent biodiesel blend in specific EMD locomotive series operated by the Omaha-based railroad. Previously, the locomotives were approved to operate at 5 percent.

Leanne Prewitt has been named president of Ervin & Smith, an Omaha-based, full-service marketing and advertising agency. Prewitt joined Ervin & Smith in 2016 as creative director. She has more than 20 years of agency experience from around the country. Current CEO Heidi Mausbach and CMO Katie Kemerling are stepping down from their roles at the agency to pursue their own business consultancy company.

Scooter’s Coffee has appointed Richard Heyman as Chief Information Officer. He has more than 35 years’ experience in IT and has successfully led digital transformation for private entrepreneurial and large public enterprises. He has served in leadership roles at Christopher & Banks, Gordmans, Pamida, Baker’s Supermarkets and other companies. He holds a Master of Science dgree from Brown University and a Bachelor of Science degree from Tufts University.

Hannah Fischer Frey, an attorney with Baird Holm in Omaha, received an L.L.M. in Taxation from New York University’s School of Law. She was part of NYU’s Executive L.L.M. program, which allows attorneys to complete coursework online while continuing to practice law full time.