New Restaurant in Midtown – Pa Mas Taqueria and Grill has opened at 220 South 31st Avenue in Midtown Crossing. Inspired by the “crystal clear waters and sandy beaches of places like Cozumel and Belize,” the restaurant offers street tacos, fajitas and carne asada. Margaritas and other craft cocktails are available on tap.

Sports Bar Consolidation – The Tanner’s Bar & Grill near 192nd & Q Street has permanently closed. Patrons are being directed to another Tanner’s at 176th & West Center Road.

It WAS a mouthful But Now It’s Empty – The Scholtzsky’s restaurant at 530 North Saddle Creek Road has permanently closed. The only Schlotzsky’s restaurant still operating in the entire state of Nebraska is at 2782 South 129th Street. 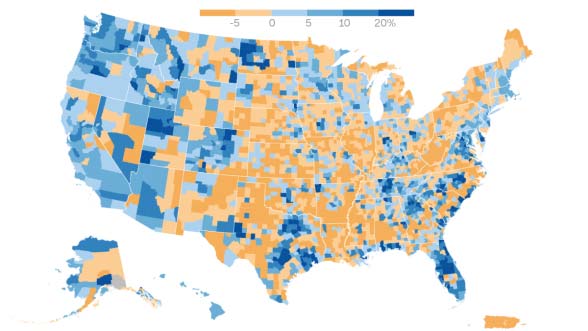 The U.S Census Bureau last week released its long-awaited official population data for cities and counties, showing population changes between the official censuses of 2010 and 2020. The results were extremely positive for both the City of Omaha and the entire Omaha Metropolitan Statistical Area.

The City of Omaha grew by 77,093, a whopping 19 percent growth rate. The population inside Omaha’s city limits is now 486,051. The city should pass the half-million mark within a couple more years.

The eight-county metro area grew by 11.8 percent, which means there are about 102,000 more people in the Omaha area in 2020 than in 2010. Total metro population is 968,000. At the current pace of growth, the Omaha MSA should pass 1 million in people in 2023 or 2024. Metro Omaha’s 11.8 percent growth rate was faster than several metro areas in our region: Kansas City, Minneapolis, St. Louis, Chicago and Tulsa. Regional metro areas that grew faster include Denver, Oklahoma City and Des Moines, Iowa.

Here are a few official 2020 population counts and growth rates that may be of interest to you:

Construction is going vertical on The Brant, a 138-unit senior living facility southeast of 180th & Harrison Street. The property will have independent living, assisted living and memory care units. Amenities will include a movie theatre and indoor golf simulator.

Stopping Pain in Its Tracks – Crystal Body Revision Massage & Ozone Therapy is opening a second location in the former Float Spa space in Spring Ridge Plaza near 180th & Pacific Street in October. The existing location is at 5634 South 85th Circle.

Omaha’s Henry Doorly Zoo has initiated the “Help the Plaza Bloom” fundraising effort to renovate the plaza between the main (south) entrance and the Desert Dome. Plans call for new building façades, landscaping, seating and expanded Oasis Grill (the concession stand outside the Desert Dome).

Back by popular demand, Midtown Crossing is hosting Zydeco Festival at Midtown Crossing this Saturday (August 21st). Zydeco superstar performer Rose Ledet will headline the event. The event will include Cajun-themed food, a beer garden and games.

OrthoNebraska is constructing a 23,000 sq. ft. clinic at 1260 Valley View Drive in Council Bluffs with opening planned for next summer. Another new OrthoNebraska clinic is nearing completion southwest of 204th & West Center Road.

Have you watched Brad Williams’ latest Grow Omaha Construction Update video (the August edition)? If not, you can see it HERE now.

Real Estate News from CoStar – The migration of major corporations from California to Texas is a reminder for Nebraska to stay on top of its economic competitiveness vis-à-vis other states.

CoStar reported this week that global consultancy giant AECOM is joining the wave of multi-billion-dollar companies relocating their headquarters to Texas from California, a state with lower taxes and business-related costs.

The construction, design and engineering firm plans to move its corporate headquarters to its existing Dallas office from Los Angeles, effective October 1st, with CEO Troy Rudd and other corporate leaders based in Dallas.

AECOM is ranked 189th on the Fortune 500 list and is currently the largest publicly traded company located in the City of Los Angeles. Other major companies to move their headquarters from California to Texas include Charles Schwab, Toyota North America, McKesson Corp., Oracle Corp., and Hewlett Packard Enterprise.

Lozier, the nation’s leading manufacturer of store fixtures, is looking to hire more than 100 new employees to work in its local manufacturing plant and distribution center. The Omaha-based company is increasing hourly wages by $1 to $3 per hour.

Thirty-seven of Baird Holm LLP’s lawyers have been listed on The Best Lawyers in America 2022 list, while five of its attorneys have been recognized as “Lawyer of the Year.” Thirteen were named to the “Ones to Watch” list.

Omaha-based Werner Enterprises, Inc. has declared a regular quarterly cash dividend of $0.12 per common share. This dividend will be paid on October 19, 2021, to stockholders of record at the close of business on October 4, 2021.

Werner has paid a quarterly cash dividend to its stockholders every quarter since July 1987.

Steve Menzies, founder and chairman of Omaha’s Applied Underwriters, will head the new St. Francis Day Foundation, a non-profit organization formed to address “pressing human and social issues.” Menzies set the agenda for the new organization in consultation with Pope Francis during a May 26th meeting at the Pontiff’s residence in Rome.

Scoular has promoted Noland Morris to director of environment, health and safety. Morris joined Scoular in 2018 as Senior Safety Manager for the company’s Food Division.

Justin Raper has been hired as a mechanical engineer at Farris Engineering, an Omaha mechanical and electrical engineering firm. Raper is a May graduate of the University of Nebraska-Lincoln.

Douglas Morris, CPA, has been promoted to partner/shareholder at McFarlin & Brokkee, PC, an Omaha accounting firm. Morris has been with the firm since 2014 as a staff accountant.