Smash Park, an indoor-outdoor restaurant and entertainment center from West Des Moines, Iowa, plans to build a new location at Giles Road & Southport Parkway in La Vista’s Southport West development. The area is home to Cabela’s, Costco, Embassy Suites and many other businesses. The 25,000 sq. ft. building will be constructed on a 3-acre lot.

Smash Park is described as “Your one-stop-shop for food, drinks and fun! Our indoor/outdoor venues combine craft food and drinks with pickleball courts, endless games, live entertainment and outrageous events to provide the ultimate gathering place for people of all ages.”

Phyl’s Deli has opened at 1006 Howard Street inside the former Ahmad’s Persian Cuisine space in the Old Market. Omaha’s Lithuanian Bakery is the exclusive bread provider for this New York-style deli and created a special bread for Phyl’s signature pastrami-on-rye sandwich.

J.H. & Sons Clothier has opened a men’s apparel store in a former Jos. A. Bank space at One Pacific Place. J.H. & Sons has a location in Sioux Falls, S.D.

Construction has started on a Porsche dealership planned for the northwest corner of 180th & West Dodge Road, between an Infiniti dealership and Pinnacle Bancorp’s headquarters building. When completed, the new location will replace the existing Woodhouse Porsche dealership at 66th & L Street 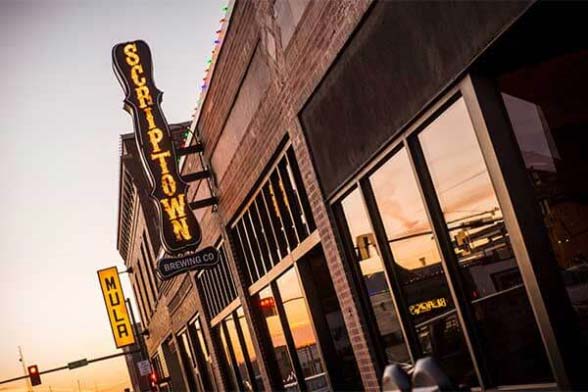 Omaha Ranked Listed Among 7 “Next Great Food Cities in America”

Food & Wine magazine, has named Omaha as one seven cities on its list of America’s Next Great Food Cities.

“It’s an exciting time for food in America,” the article says. “The culinary landscape in cities big and small around the country has matured exponentially in the past two decades, a shift that has been thrilling to experience and to taste.”

Here are Food & Wine’s “seven most exciting big cities” considered to be up-and-comers in the culinary world:

“Storied steakhouses have been joined by a new wave of restaurants,” the article starts off in its section about Omaha, “and the best ice cream for miles around.” Here’s how Omaha was described according to writer David Landsel:

“Nearly everyone is familiar with the Reuben…but far fewer people know where it comes from. The longtime diner staple has more than a few origin stories, some of which sound like rather tall tales. But the most convincing one comes out of Omaha, where it’s said a bunch of local merchants who played poker after hours at the Blackstone Hotel preferred the sandwich as their midnight snack.

“For the longest time, you couldn’t go to the Blackstone for a Reuben, seeing as the building was converted to offices back in the early 1980s. But Omaha didn’t forget. Today, the Blackstone is a hotel once more, the Kimpton Cottonwood Hotel and Reubens are once more on order, now made with nutty Gruyère cheese and a hit of spicy mustard.

“This revival of a legend—the hotel and the sandwich—didn’t happen in a vacuum; their reemergence is just the latest bit of good fortune for the stretch of Farnam Street that has come to be known as The Blackstone District, a focal point for Omaha’s most avid eaters and drinkers.”

“All this goodness is concentrated in just a few blocks, but Omaha seems to go on forever. Not far away is one of the more famous restaurants in the city, Modern Love. The vegan comfort-cooking spot has roots in Brooklyn but an owner (cookbook author Isa Chandra Moskowitz) with roots in Omaha. There are also fancy prix fixe dinners, like the simple yet elegant European cooking at Anthony Caniglia’s Au Courant. And what is Omaha without the runza, that beloved regional interpretation of the bierock, a humble hand pie brought over from the Old World? Don’t miss Kate Anderson’s take on the Nebraska specialty at Carter & Rye, where the classic ground beef and cabbage filling comes wrapped in pretty puff pastry.”

Noddle Companies is planning to break ground this summer on a timber building, meaning the structure would have a specially designed timber skeleton as opposed to a steel one. This is believed to be the first timber building to be built in Omaha in decades. Part of the Builders District, the building will be at 1501 Mike Fahey Street directly south of Kiewit’s new headquarters. The 5-story building will be 125,000 sq. ft.

After operating for 33 years on the south side of Westwood Plaza, the Westwood Cinema 8 has closed permanently. If you want to purchase a piece of history, The Auction Mill plans to hold an auction in late May or early June in order to liquidate assets including digital projectors, speakers, amps and more than 5,000 movie posters.

New signage graces the top of a 15-story building at 36th & Farnam Street that once served as Kiewit’s headquarters and is still home to Warren Buffett’s office. The former Kiewit tower has been renamed “Blackstone Plaza.” The building is being renovated both inside and out. According to WOWT, Blackstone Plaza is nearly 55 percent leased. An official grand opening is expected to take place this summer.

Goodwill Omaha plans to open an 11,000 sq. ft. store plus a job-training facility inside a former Hy-Vee space near 36th & L Street. The store is expected to open in October, while the job-training center will open in January of 2023.

Approximately 40 U.S. Air Force officers and civilians gathered last week for a ribbon-cutting ceremony to open the new CymSTAR Training Center simulator facility in La Vista, according to the Omaha World-Herald. The facility allows Air Force pilots to complete simulated training flights on the E-4B Nightwatch jumbo jets, also known as the “Doomsday plane.” One of the Doomsday planes is airborne at all times in order to maintain communication between military commanders and units in the event of nuclear war.

The City of Omaha and RDG Planning & Design will host a series of open house events designed to engage the local community regarding development of the Omaha Housing Affordability Action Plan. The plan, which is being led by the City of Omaha’s Planning Department, aims to identify effective strategies that address Omaha’s housing affordability needs particularly on quality affordable housing. Various open house events will take place during the first weeks of May 2022. Information including dates and locations of the open houses is available HERE.

Real Estate News from CoStar –  Billionaire real estate executive Sam Zell says it’s inaccurate to say the pandemic sparked what’s known as the Great Resignation. Instead, in his viewpoint, the phenomenon of millions of workers quitting as they work from home is really just a big excuse.

That’s because many workers already had lost the passion for their current jobs, he said, and when the motivation of in-person accountability and oversight was replaced with isolation and Zoom calls, they also lost the external push to succeed. He said that’s far more likely the bigger cause for the nearly 48 million people quitting their jobs last year, as lots of them may have looked in the mirror after a long stretch of working from home and asked themselves, “Am I doing what I want to do?” READ MORE.

Jordan Estee is now a licensed commercial real estate broker at NAI NP Dodge, where he provides comprehensive brokerage services for office, retail, industrial, multi-family and investment properties. He previously worked in the company’s property management division. He graduated from the University of Nebraska at Omaha with a Bachelor of Science degree in Business Administration with a concentration in Real Estate and Land Use Economics.

Jason Hamilton has been promoted to Chief Information Security Officer at Mutual of Omaha. He leads the information security program in protecting proprietary and customer information while defending against cyber threats to the enterprise. Hamilton joined Mutual in 2017 as an information security manager. He is a retired Lieutenant Colonel in the United States Marine Corps.

City Ventures has appointed Dr. Joann Schaefer as president of City Ventures Health. In this newly created role, Schaefer will lead City Ventures’ emerging health care sector. She is the former Chief Medical Officer for the State of Nebraska and a former executive vice president at Blue Cross Blue Shield of Nebraska.

YMCA of Greater Omaha has appointed Rebecca Deterding as president and Chief Executive Officer. She served as the organization’s Chief Financial Officer for the past seven years and interim CEO since last August.

Farm Credit Services of America has elected four agricultural producers to its board of directors: Dana Morgan of Corning, Iowa; Susan Voss of North English, Iowa; Duane Kristensen of Minden, Neb.; and Jason Frerichs of Wilmot, S.D. Mark Weiss of Omaha was reappointed to a four-year term. Weiss is an executive with Smart Energy Water, a technology company servicing the utility industry.